The Forest for the Chairs 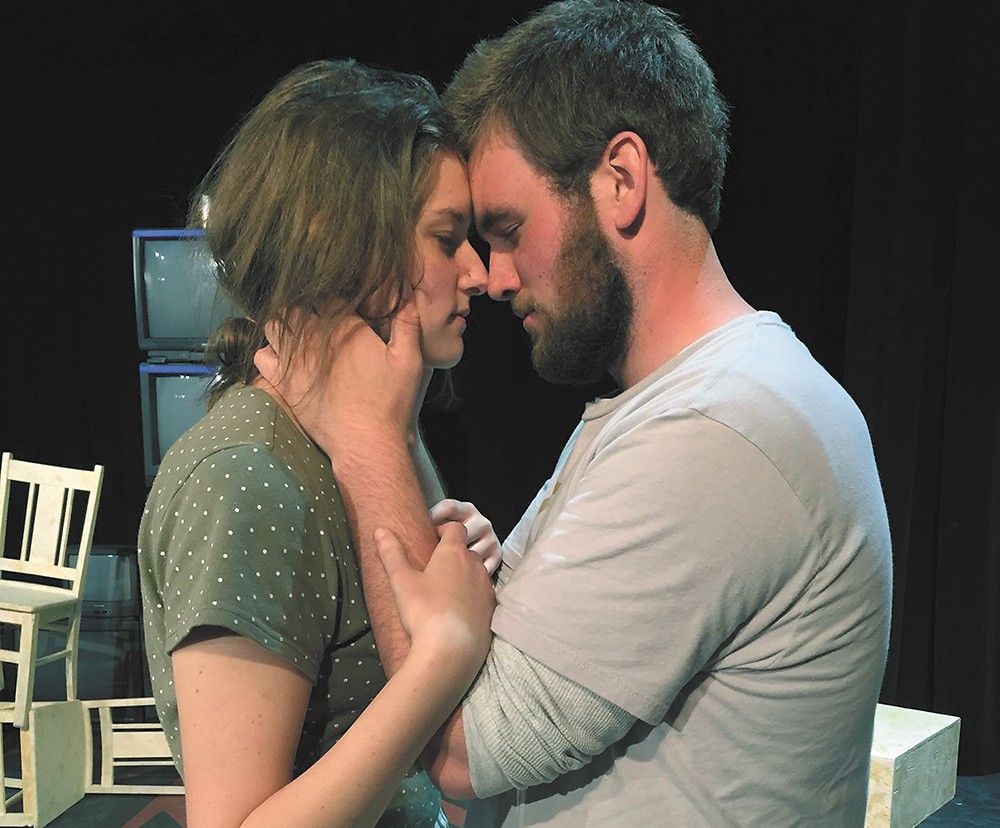 Mikyla Bordner and Scott Worley play the leads in SFCC's take on The Crucible.

A ll plays, you could say, are products of their time,

but The Crucible is rare in being the product of two times.

The first is the Salem witch trials of 1692–93, which supply the play with its semi-historical plot. The second period concerns the anti-Communist purges of 1950–54, publicly spearheaded by Wisconsin Republican Sen. Joseph McCarthy. These are what prompted playwright Arthur Miller — who would himself later be interrogated by the House Un-American Activities Committee — to dramatize the acute parallels between the panic and fearmongering of a religious milieu and that of his nominally more political one.

Because its Puritanical setting is so tightly interwoven with its allegory, many productions of The Crucible tend to be literal. Yet that's exactly what Josephine Keefe wanted to avoid in a new production of the play she's overseeing at Spokane Falls Community College.

"Initially when I was asked to direct The Crucible, I kind of eye-rolled because I've never really seen a good production of it. For me, I get almost nauseous when I see this Thanksgiving pageantry on stage," she says. Consequently, she sought to disentangle The Crucible from the 1690s as well as the 1950s.

"By making it too much of a period piece, we continue to distance ourselves from those events. I wanted to find a world in which the past and the present are living together," says Keefe. "I think that is manifested through the costume design by a very talented student, Lexi Saeger, and it's told through this very surrealistic, stripped-down set design by Teko Dumoulin. And then we have music composition by Julia Keefe, my sister, and lighting design by Preston Loomer that's going to play with the distortion of light and shadows."

Keefe says she wanted the overall design to take on more of an "expressionistic characteristic" and "to play with angles and to play with unity and disunity, to play with harmony and chaos. When are things perfectly in line with each other, and how do those elements slowly unravel? The telling of the play is just as much a part of the scenic design as it is about the actors staying true to Arthur Miller's text."

Abstracting the setting while remaining faithful to the text was important, she explains, because Miller's "protagonists [are] not cut and dry; they're men and women who are dealing with their own inner demons." It's a vital ambiguity she's impressed upon Mikyla Bordner and Scott Worley, who play Elizabeth and John Proctor, the flawed and persecuted couple at the center of the events.

"They're the moral compass of the show, and we needed to define the characteristics that drive that compass," says Keefe.

One way that will happen is through a "purpose-driven" approach to props and scenery. Instead of vanishing between breaks, they'll be permanent parts of the mise en scène.

"I love productions where every single set piece remains on stage," Keefe says. "One of the things I can't stand is transitions — it just stops the flow of the show, the energy drops. You see everyone lugging everything onstage, offstage.

"In this production, if there is a chair that isn't being used, it becomes an architectural piece in the background. At times in the show, the chairs are stacked on top of one another to produce what I'm calling trees, because the forest — or the chaos of that forest — plays a part in the storytelling of The Crucible," says Keefe. "Every prop has a value, every movement means something. People might hate the scenic design, but what I'd love is if two people who have different views of my production were able to go get coffee afterwards and discuss it. That's a success to me." ♦