The Forest for the Trees

A Walk in the Woods might not restore hope in diplomacy, but its Cold War-era musings are uncannily timely 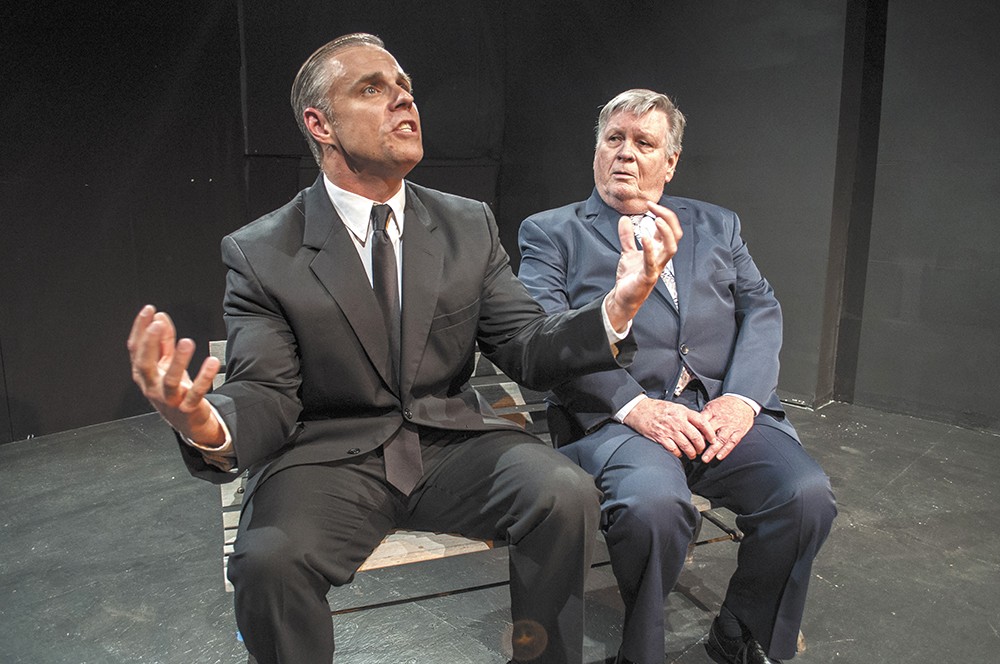 Sarah Wurtz
Billy Holtquist (left) and Bob Nelson take us back in time in this Stage Left production.

The global perspective was quite different

when Lee Blessing's A Walk in the Woods premiered in 1987. Foreign affairs were largely couched in the dichotomous terms of democracy versus communism, at least in terms of their embodiment by the U.S. and the USSR. Conventional wisdom held that coexistence was impossible. For one superpower — and indeed, the world as a whole — to endure, the other perforce had to crumble. This was, after all, the same year that Ronald Reagan stood in front of the Brandenburg Gate and challenged Mikhail Gorbachev, his Soviet counterpart and an unconventional proponent of glasnost, to tear down the Berlin Wall. The physical act was not nearly as important as the symbolic one.

As a result, Blessing's two-man play, which takes its inspiration from an off-the-record talk between U.S. and Soviet arms negotiators Paul H. Nitze and Yuli A. Kvitsinsky at a Geneva summit in 1982, reflects that antithesis right down to its characterization. Kvitsinsky's imagined proxy is the veteran negotiator Andrey Botvinnik (played in Stage Left's staging by Bob Nelson), blithe and jaded, fond of tangential anecdotes and "frivolous" talk. He first takes the stage mid-sentence, amusedly relating a joke of his that tanked the career of a gullible political reporter. Nitze, loosely portrayed by the solemnly idealistic John Honeyman (Billy Holtquist), is new to his position, recently summoned to replace his unseen predecessor on the back of some diplomatic success — "at a lower level," as Botvinnik repeatedly reminds him.

In his neophytic eagerness, Honeyman has no interest in joining Botvinnik in his quiet enjoyment of the Swiss mountain air while seated on the stage's sole prop, an ashen-colored park bench. He wants to get down to the business of arms reduction. Botvinnik, however, would rather they take this time to become friends, to talk of country music, Babe Ruth and Mickey Mouse. Honeyman will have none of it. In pursuit of an agreement to spare the world from nothing less than mutually assured destruction, he prefers formality to friendship.

"Formality," retorts Botvinnik, "is simply anger with its hair combed."

With one-liners like that — not to mention the Russian's tidy distillations of the ironies of diplomacy ("We should put the [bargaining] table at the bottom of a missile silo.") or their countries' respective mentalities — it's easy to picture Blessing circa 1986 amid the furious thwack of typewriter keys, giddily drafting these exchanges with Honeyman as the straight-faced setup man to Botvinnik's cynically comedic foil.

Still, Blessing's script has a flow that is natural enough, and under the direction of Janelle Frisque, Nelson (despite some slippery lines at the start of the second act) and Hultquist assume these roles so fully that a plausible — and plausibly transformative — relationship develops between them. It should come as no great surprise that this walk in the woods is headed in a dispiriting, disaffecting direction, but, particularly in light of the ongoing conflagrations in Ukraine, Israel, Syria and Iraq, the journey is remarkably resonant and timely. ♦