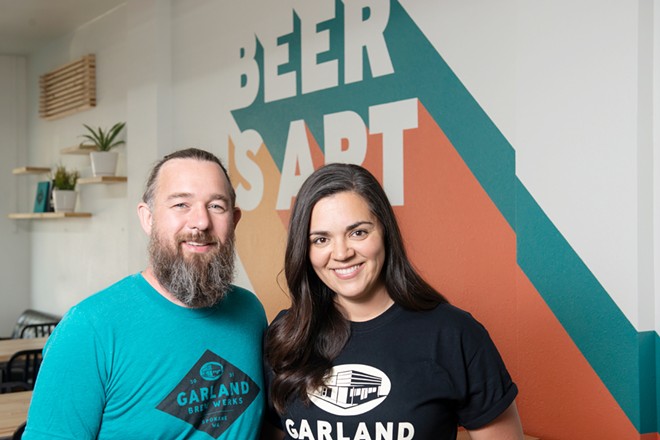 At long last, Spokane's historic Garland District has a craft brewery of its own.

"We jumped at the opportunity to be in the neighborhood," TJ Wallin says. "It's what we always wanted, to be a neighborhood brewery, but we struggled before to find a perfect location. We're excited to be a part of the Garland neighborhood."

Garland Brew Werks' home is a building that last housed a sewing supply shop and that it now splits with Giant Nerd Books. Wallin anticipates the two businesses will host a dual grand opening celebration sometime in August.

Upon its public debut last week, the brewery had six of its own beers on tap, plus a single guest tap of hard seltzer from local Humble Abode Brewing. Soon, Boyd expects to have all 14 tap handles pouring Garland Brew Werks' recipes, including one nonalcoholic kombucha, two hard seltzers and a nonalcoholic root beer he and his daughter Lyric co-created.

"We have been making soda at home for a long time, since she was little, and when TJ said, 'I want root beer,' well, we had a recipe," Boyd says. "The root beer fame has already gone to her head," he jokes. "She thinks she is the root beer baroness of Spokane."

Lyric's Root Beer is served in mugs specially etched with that official name, and is also showcased in a root beer float ($7) on the brewery's dessert menu.

Ten of the Brew Werks' taps are totally dedicated to the ever-rotating output of beer made on its five-barrel system.

"We'll always have a Northwest IPA, a hazy, a sour, probably something fruit-oriented, a lager, and we'll try to have at least one dark option," Boyd says.

The only non-rotating beer planned to be a tap mainstay is the OG — Original Garland — IPA.

"It's a big thing with the beers I'm making to really fold the neighborhood into the spirit of Garland Brew Werks," Boyd says. "The history and social nature of this neighborhood, we want to try and make it a fabric of what we do here."

Heading up the brewery's kitchen is chef Sheila Clifford, who's worked in the food industry since she was 16 in roles from server to cook. Clifford joined Garland Brew Werks after hearing through Boyd, her partner, that they needed someone to run the kitchen.

So, she compiled a menu of beer-complementing food that's all $12 or less, including four specialty bratwursts ($10 each) and six flatbread pizzas ($12 each), plus shareable snacks like stout-roasted pecans, tater tots featuring all scratch-made sauces and a couple of kid-friendly snacks ($5).

"Sauces were a big push for me," Clifford says. "It's all about the flavor, and what better way than a condiment to do that."

The kitchen showcases the brewery's beer in numerous ingredients and dishes, from beer cheese and beer mustard condiments to red onions pickled in beer, a house hot sauce, and more. The bratwurst sausages are also cooked in a stout-style beer.

Many of Clifford's recipes were created and perfected at home along with Boyd.

"A big push for us was to find ways to incorporate the beers," he says. "There is a brewery and restaurant in Hood River, Oregon, and the beer and food are married so well there, it creates such a unique experience, and we needed something like that here."

The most popular flatbread so far is Clifford's seasonal summer Margherita, with lemon ricotta, mozzarella, herb-marinated tomatoes, arugula and a balsamic glaze. The elote bratwurst is also an early favorite, pairing the flavors of classic Mexican-style street corn with the German-style sausage in the form of toppings: roasted corn salsa, cotija cheese, cilantro, mayo and the Brew Werks' house hot sauce, made by Boyd.

In addition to its open, European-style taproom, the brewery boasts a large outdoor patio on the building's east side that's perfectly shaded from the late day sun. Inside, the taproom features a massive wrap-around bar top and a long, communal bar-height table down the space's center. On one wall, a focal mural of the phrase "Beer is Art" captures Garland Brew Werks' focus.

"It's handcrafted — it's somebody's craft," Wallin says. "Not all beer is art, but when you come down to have some locally made craft beer, someone put their heart and soul and labor into it, just like chiseling a piece of rock into a statue." ♦