Verne Windham's 15-year tenure as director of the Spokane Youth Orchestra comes to an end this week. 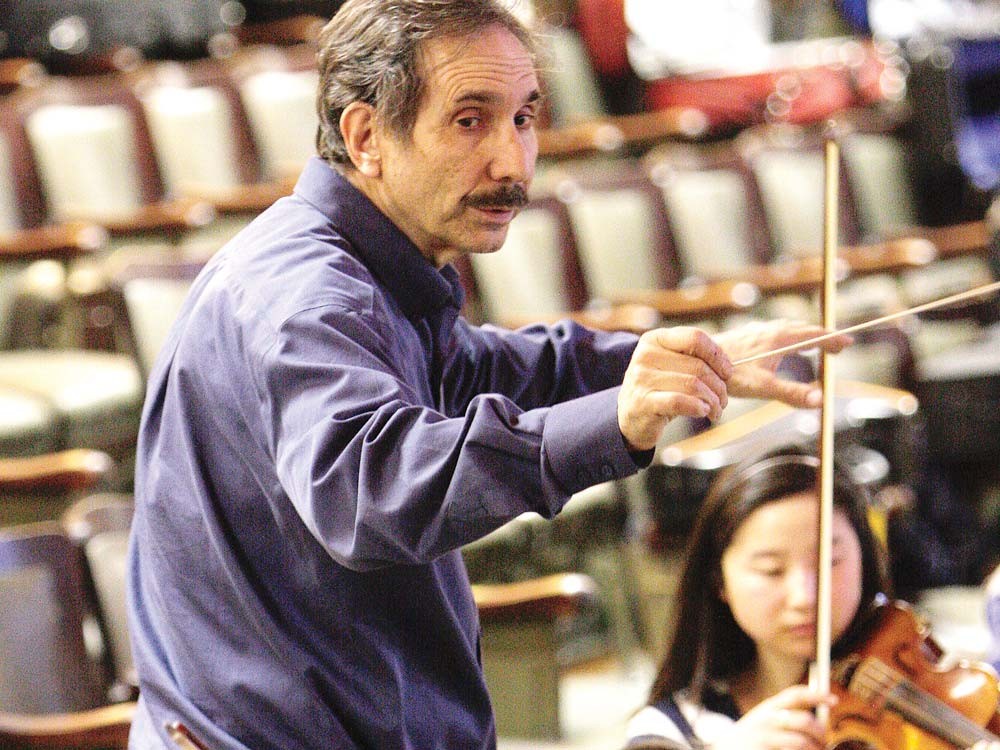 Young Kwak
'I came for a night and stayed for 15 years.' Verne Windham at one of his final orchestra rehearsals.

"Glorious." If Verne Windham, the classical music voice of KPBX and conductor of the Spokane Youth Orchestra, has a favorite word — a signature word — this is it. The music is glorious, the musicians are glorious, the effort is glorious. But now, the era ends. Following the SYO’s final 2010-11 concert at the Fox on Sunday, Verne Windham will pass on his baton.

Towards the middle of the concert, he’ll bid farewell to his 32 seniors. Seems unremarkable, but with Windham, it’s an event not to be missed. He’ll begin by saying a few words about the season, about the accomplishments of the orchestra and about the importance of performing music. A few years back he opened with: “I want you to know that music, the stuff on paper, even the stuff in the mind of the creator, is all a reflection of the act of playing the music, and so the essential ingredient of music is what you see in front of you — the young musicians of the SYO.”

He’ll then bring each senior to the stage — one by one — and he’ll have something personal to say about each. He will tell their stories, speak of their time in SYO — their triumphs and their challenges. He’ll make mention of their post-high school plans. He knows them like family. All 32.

Strange circumstance brought Windham to the orchestra. Two weeks before a scheduled concert back in 1996, the orchestra’s conductor suddenly quit. Just like that.

Oboist Katie Frankhauser-Guerrero (SYO, 1995-98) recalls the chaos that night: “We all arrived to rehearse and discovered that we no longer had a conductor. Confusion reigned; I don’t think any of us knew what was going on.”

The SYO board sent out a mayday to Windham, who had conducted SYO on an interim basis three years before. The replacement conductor arrived to find a room full of confused teenagers; worse, they had no scores — the sheets had been reclaimed by his predecessor. Into this pending disaster, he plunged. First he had to deal with the music score problem: “We scuffled up music wherever we could, mostly from Spokane Symphony.” He then had to refocus his the kids. “We weren’t great,” he said, and then continued resolutely, “but we performed that concert.”

Thus it began. Says Windham, “I came for a night and stayed for 15 years.”

By 1996, Windham felt that he was ready. “I believed that I could bring to bear all my music experience, my education [Eastman School of Music], my orchestral experience [principal horn for 17 years with the Spokane Symphony Orchestra], and my work at KPBX and throughout the community. I thought that I could borrow on all of this, and for the most part I think I have.”

Frankhauser-Guerrero recalls his immediate impact: “More than anything, I remember the ease with which Verne interacted with us, and the level of playing he demanded. His sheer enthusiasm for the music made us want to play it well.”

Windham wanted their SYO experience to be challenging, to “learn how to get the job done.” But he also knew that social interaction was part of the gig. He would keep things light, but focused; he would challenge and praise performance and demand professional protocol, all the while showing understanding.

Ryan Jacobsen, a 2011 concertmaster, speaks for many when he says that he will always remember Windham’s hilarious sense of humor.

“The key to my success working with teenagers over the years,” says Windham, “was to avoid overreacting.”

His early goals were modest: “I just wanted an orchestra better than one only a mother would want to hear.” Katie Frankhauser-Guerrero, who now lives in Spain, recalls that he brought them much more. “He was a legend, and we were awed that such an important person in classical music circles would take on the  job of guiding our orchestra. I for one felt like we had earned some sort of credibility just by having him at the helm.”

Four years later, in 2000, Windham confronted his most serious challenge. In mid-April, the SYO had just performed a memorable concert at St. John's Cathedral featuring SYO concertmaster Jason Moody, who today performs with the Spokane Symphony Orchestra.* A week later Windham felt a lump on his neck.

Surgery was immediately scheduled in Seattle. Follow up radiation treatments were prescribed.

He would be limited for several weeks, a time when SYO had two concerts scheduled — the organization’s 50th Anniversary concert, followed by the season finale. The Spokane music community rallied. Long-time Spokane Symphony Director Donald Thulean, who was scheduled to conduct part of the anniversary concert, did that and much more. Marty Zyskowski, former SSO principal timpanist, helped out with rehearsals. Windham managed to conduct one piece. Zyskowski then both rehearsed and conducted half the finale concert.

By August, Windham was feeling much stronger. He has been clear of cancer ever since.

Over the following years, Windham continued to raise the bar. He programmed in more complete symphonies. Auditions became more formal and frequent. Today, SYO re-auditions seating assignments in the string sections three times a year. Along with raising the level of proficiency, Windham moved to expand SYO’s repertoire.

“One of my responsibilities,” he says, “was music education. I wanted the kids to learn about and perform major works by major composers.”

Kim Houglum, who performed as concertmaster for four of her six years in SYO, asked Windham if he could list for her all the pieces they performed while she was in the orchestra. On the list are more than 70 compositions performed from 1998 through 2004: Bach, Beethoven and Brahms all appear on the list; so, too, do Rimsky-Korsakov, Elgar, Prokofiev, Haydn, Dvorak, Berlioz, Schubert, Holst, Kabelevsky, Shostakovich, Tchaikovsky, Stravinsky, Barber, Bernstein, Mozart, Sibelius, Grofe and Ravel. Several local composers — Don Caron, and William Berry, to name two — are also on the list.

At one point, Windham decided that the SYO needed a signature piece that every SYO member knew. Kaylee Wood, double bass player and 2011 concerto winner, observes that the Beethoven: Symphony No. 5 in C minor became that piece. “I’m pretty sure we’ve played it every year since, forever,” she says.

Windham confirms Wood’s impression, and points out with satisfaction that he is using Gunther Schuller’s notations, which are Beethoven’s original.

“It’s what all the kids learn to play, and this means that we can perform it anytime, anywhere and, most importantly, we can work in alum’s with ease. And that’s important, to maintain contact with alumni,” he says. (Former SYO musicians are always invited to sit in with the orchestra for this one piece, and when the orchestra performed the Beethoven at its May 1 Bloomsday concert, Windham proudly recognized four former SYO musicians who were sitting in.)

Talent, depth, leadership, proficiency — the pool changes from year to year. All youth symphony directors confront the challenge of matching a particular year’s talent and proficiency with programming. “This year,” says Windham, “my strings are as good as I’ve ever had.”

Above all, Windham would always push his kids to take chances. For example, in 2004, when my son Timothy was in the SYO, Windham programmed Richard Strauss’ tone poem for large orchestra, the demanding Death and Transfiguration. This piece is 24 minutes of irregular rhymes, with horns for minutes on end playing in the highest registers. It’s as much of a physical drain as it is a musical challenge.

“Going into the 2003-04 year, I knew that I would have the two things I needed,” he recalls. “I would have depth in every section, and I would have an unusually high number of kids who had cross-trained on piano."

Need for depth in a big piece such as this is easily understood, but why was piano training so important? “Piano training produces musicians,” he says, “not just instrumentalists.” Windham has made an important, but not obvious, distinction that he then builds on.

Still, the challenge of Strauss’s composition would be enormous. Week after week, the kids struggled, Windham urging them on. Alec Hirschauer, a cellist, recalls the night they got it close to right for the first time: “The rehearsals were grueling. At some point, the work came together and after we finished our first run-through that actually sounded like it worked, Verne looked at us and said, ‘You guys just did Death and Transfiguration.’” Classic Verne. With just one simple line, he had let his young musicians know that they, together, had achieved something difficult. They had gone over the bar. As Hirschauer puts it: “I knew it was a tough piece, but it wasn’t until he said that it was kind of a big deal did I realize that it really was a kind of a big deal. To this day, Strauss has been my favorite composer.”

On taking over in 1996, Windham soon realized that, to keep their attention, these young musicians needed to be challenged. He had to increase the number of performances and feature serious music. “These young people will only practice the same pieces so long before they get bored,” he says. When he arrived at SYO, the orchestra performed only three times a year; today, they perform six shows a year. He also began to program complete symphonies — now three a year.

Adding to the orchestral opportunities and interest is the annual SYO concerto competition. The rules are simple: Contestants perform a single movement from memory (with piano accompaniment if desired). A panel of outside judges hears the finalists (this year, 11 were chosen from the original group of 21 who entered the first round). Three winners were chosen, and they each get to perform their respective movements with the full orchestra at one of the two May concerts. Kaylee Wood, double bass, and Natasha Black, piano, performed beautifully at the May 1 concert. At the upcoming finale concert, DongGyun Kim, the third of this year’s winners, will play the Elgar: Cello Concerto in E minor.

And after Kim plays, Windham will introduce his seniors. The SYO will then perform Gustav Holst: The Planets. He’ll lower his baton and motion for his kids to stand to acknowledge the applause. Then, a turn and a bow — for the last time.