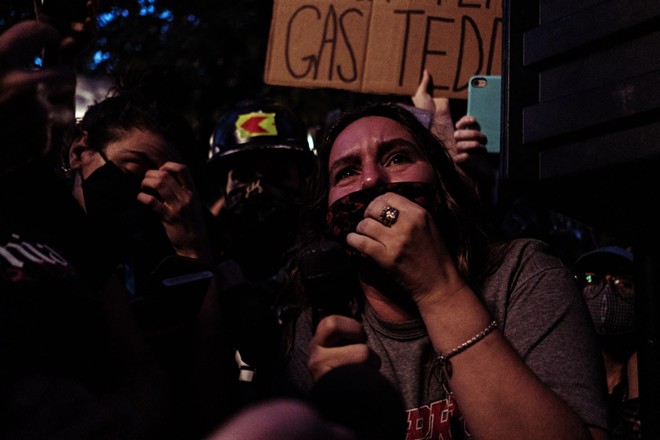 Mason Trinca /The New York Times
Demonstrators expressed their frustrations with Portland Mayor Ted Wheeler when he visited the protest zone late Wednesday, July 22, 2020 in Portland, Ore. Fueled by a wide array of grievances, including against police brutality, protests have rocked Portland for eight weeks.

Has there ever been a more evil election strategy than the one now playing out in Portland?

Richard Nixon and Ronald Reagan had their “Southern strategies,” laying the groundwork for the Republican Party’s opening to racists and white supremacists. President Trump has turned that opening into a six-lane expressway.

The 2020 election will be decided in a handful of Midwestern states. To carry those, having failed to fulfill his economic promises, the president intends to sow fear among swing voters, mostly white suburbanites, particularly women.

With early polls indicating he is losing those swing voters, Trump has upped the ante on the fear strategy.

Deploying federal agents to Portland — armed Department of Homeland Security (read immigration police) who are not identifiable and whose tactics include a domestic version of extraordinary rendition — Trump’s goal is not to end violence and crime but to encourage it. The angry response from Portland protesters and the increase in their numbers seen in recent days was totally predictable. Trump is counting on that.

Even if violent confrontations escalate only marginally, his right-wing propaganda machine can paint Portland as a city under siege with only the president standing between residents and violent anarchy. In a call to Trump super-supporter Sean Hannity on Fox News Thursday night, the president said Portland Mayor Ted Wheeler had been “a fool” to join protesters the night before and that federal officers had “knocked the hell out of him,” apparently deservedly so in the president’s view.

As the strategy seems to be working in Portland, the administration has announced that DHS officers will be dispatched to Chicago, Albuquerque and likely other American cities governed by Democrats.

How do concerned Americans respond to this cynical strategy?

If all Trump opponents could agree that nothing is more important than his defeat in November, they would put an end to all street protests, saving powder for a post-election national accounting on issues of race, police violence, economic inequality and other crucial issues. Counter-intuitively, that would be the most aggressive action Trump opponents could take.

But suggesting such a response could also be viewed as a retreat at a time when direct action may be the only option open to those wanting to secure American democracy.

Protest movements have been successful in the past, moving society toward critical change. But never in our modern history has the national administration been so direct in its response, attacking the very foundation of our freedoms — the rights to speech, assembly, and petitioning.

There is no easy answer to this most critical problem. But it is all too likely that Trump’s re-election in November will unleash, given what we are seeing, an American fascism unlike anything seen before. A reckoning is coming. But how in hell do we end up on the right side of history? ♦