The Goats Who Stare at Men

Scotchman Peak is known for picturesque views as well as cute, furry mountain goats — that may bite or gore you 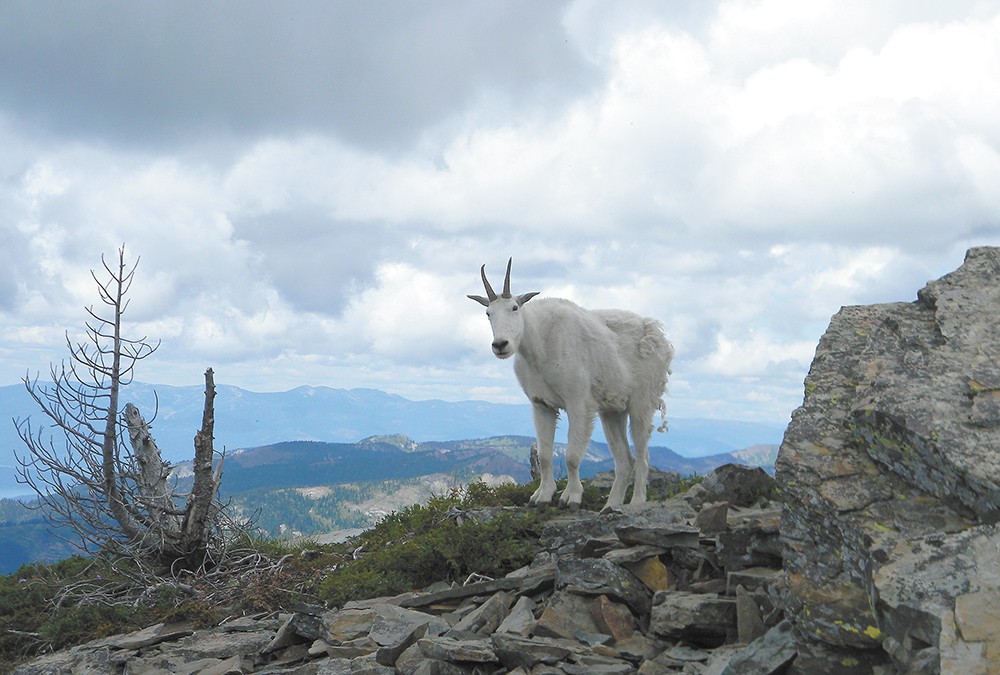 At Trailhead 65, which leads to the top of Scotchman Peak,

is a foreboding sign announcing to hikers that they're entering "Bear Country" and should take care to neither attract nor antagonize the potentially ferocious omnivores.

But the animal that people around here are more concerned about isn't a large mammal capable of mauling hapless hikers.

"Watch out for the mountain goats," said the cashier at the gas station in Clark Fork, the town just outside of the peaks, referring to the herbivores that stand under 4 feet. "They're aggressive."

The day before my hiking partner and I made our ascent up Scotchman Peak — a 7,009-foot mountain that's the highest point in Bonner County and provides a panoramic view of Lake Pend Oreille — we stopped at the trailhead where a woman who'd just finished descending from the peak told us it was a beautiful hike. But she cautioned us to beware of the goats.

One of them, she said, was particularly belligerent and was "bullying" the other goats. Her friend brought a can of mace for the trip.

Last year, the U.S. Forest Service closed the trail after multiple reports of goats attempting to head-butt or charge hikers. That year, a hiker required stitches after being bitten by a goat. In 2010, a man died after being gored by a goat in Olympic National Park.

The problem, says Shoshana Cooper, public affairs officer for the Idaho Panhandle National Forests, is that once goats get used to obtaining salt by licking the sweaty bodies of hikers, they can become demanding and aggressive toward humans. It's easy to see why so many hikers oblige the goats. They have snow-white fur, pitch-black noses and eyes that exude a gentle curiosity. Some hikers go further, giving them food.

"They are animals," says Cooper. "And they're doing what they need to do to survive."

After about three hours of huffing and puffing

our way up the trail, the trees thinned, making way for the final rocky stretch, marked with a sign reading "PLEASE DO NOT approach, feed or harass the goats."

As we continued our ascent, we kept our eyes peeled for any goats preparing to charge us, devour our food and lick the sweat clean from our battered bodies. But it wasn't until we reached the summit that we saw a goat reclining on a nearby ridge about a hundred feet away, chewing its cud. The goat, which was joined by another, seemed indifferent to the nearby hikers. A chipmunk was more aggressive in trying to steal a bite of my sandwich.

As we prepared to leave, the goats got up and glided down the steep cliff. One disappeared into the craggy backdrop. The other made its way toward us. The other hikers on the peak turned their attention from their sandwiches, trail mix and cans of Pabst Blue Ribbon and pointed their cellphone cameras at the goat. The goat just stared back before disappearing down the side of the peak. On our descent, the goat made a brief and uneventful reappearance.

Mary Franzel was waiting near the wooded area

on our way down. Wearing a dark red Friends of Scotchman Peaks Wilderness hat, she was out volunteering on behalf of the organization, appealing to hikers to not get within 150 feet of the goats.

"We want you to view them from a ridge," she said.

Despite all the efforts to educate hikers that goats and humans don't mix, she says the message is still ignored.

Just a few weeks ago, she said she chatted up a man making the descent from the peak. She said he conspicuously avoided talking about the goats. After they finished their conversation, Franzel found that he had left a pile of corn for them.

She also recalled an older couple feeding baby goats right out of the palms of their hands. When Franzel confronted them, they responded, "They're not endangered."

She says that if a goat gets too close, she advises hikers to make noise or even throw rocks. She said a goat that becomes aggressive after becoming habituated to people might have to be relocated. If it injures a person, she said, even worse can happen.

"I'd rather have [a goat] get hit with a rock than get shot," she told us.

Some people just can't help themselves

around wild animals. This year, a bison calf in Yellowstone National Park had to be euthanized after a well-meaning visitor put it in his car. In Alaska, a goat drowned while fleeing camera-wielding tourists. After a moose was injured by a car in Spokane, some people insisted on taking selfies with the wounded animal.

But Cooper says that things on Scotchman Peak are improving. Last year, after Trailhead 65 was closed following incidents with goats, she says the Forest Service put salt blocks away from the trail in hopes of getting the animals to forget about humans. A year later, she says, there have been no reported incidents of goats acting aggressively toward hikers on Scotchman Peak. But that could easily change.

"People see goats, and they look cute and furry and they want them to come close," says Cooper. "And people forget they are wild animals." ♦