A conversation with legendary sportscaster and WSU alum Keith Jackson. 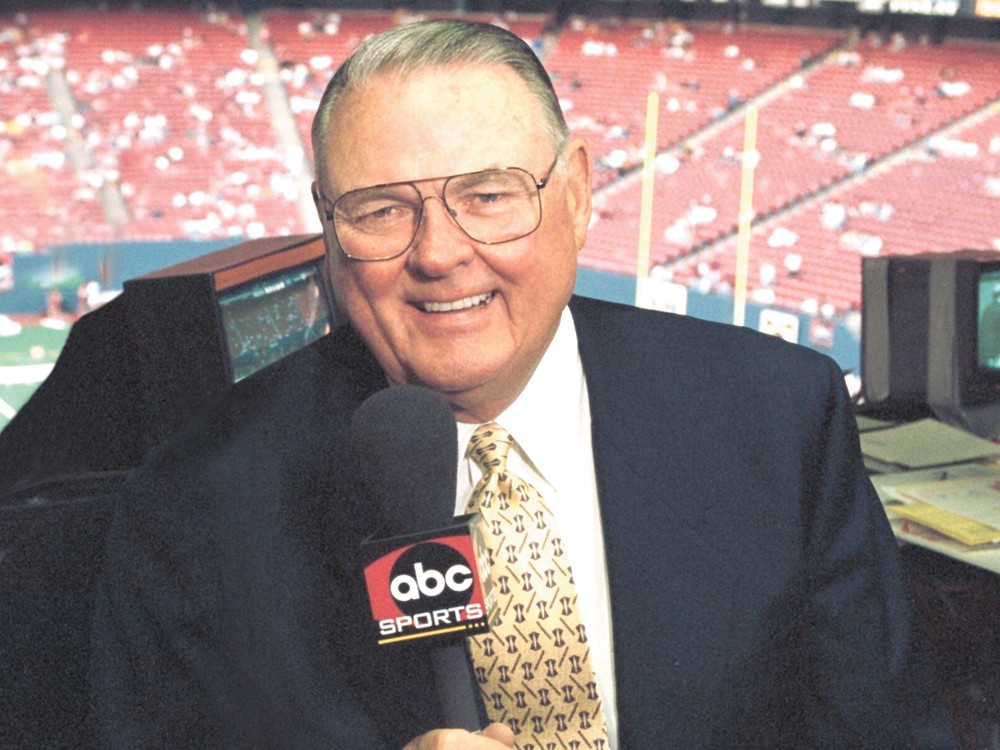 Six years after his sweet Southern twang last sang its way over the airwaves as The Voice of college football, Keith Jackson’s voice is every bit as delightful to hear over the telephone.

“Some days I’m a little short of energy,” Jackson reports. “I don’t know why.”

At 83, Jackson displayed ample energy recently during an hour-long interview. Despite some health problems in recent months, he happily noted that he’s coming up on his 60th wedding anniversary with Kuri Ann (“Norweigan pure bred”), and they still reside in the Sherman Oaks area of Los Angeles (“Same house for 44 years”).

Jackson grew up poor on a Georgia farm during the Great Depression, riding a horse to school. He was nearing the end of a four-year stint in the Marines in 1950 when he decided, after discussing college options with other members of his squadron in China, that he would attend a school then known as Washington State College.

Jackson originally planned to study courses that would help him become a career Marine, but he soon fell in love with sportscasting. He traveled to 33 countries during a sportscasting career that made him famous, but he gained his greatest fame and fortune announcing college football on ABC.

Jackson, articulate and interesting as ever, eagerly tackled a few questions posed by The Inlander.

Jackson: Mike Leach was a good hire, I think, because he’s so unpredictable. He’s perfectly willing to try something and try it at the most opportune moment. … The type of football he likes to play offensively, you don’t have to have a barn full of thoroughbreds to play like that. All you need is a guy who can throw it and some folks who can catch it. They’ll find their way to a considerable amount of success.

I know they’ve got the right guy sitting in the athletic director’s chair. I mean, he’s good, and he’ll be good as long as he’s in the business. I don’t know how long he’s going to stay there, but when he leaves, it’ll be a lot sounder than when he arrived.

What do you think of the proposed four-team national playoff in football and its potential impact on the bowl scene?

If a city wants to have an annual festival and have a football game, who are we to say they can’t do it? Let ’em alone. They’re putting money in your pocket. … The most important thing is the pride that comes out of it, and all the people who graduate and go on and, bless ’em, come back when their hair turns white and sit down and write a check for their alma mater.

You say the most memorable sports event you covered was the University of Washington’s rowing victory in the Communist-run Soviet Union in 1958. Why was that so special?

It was the first live sportscast ever made from the Soviet Union to the United States, and the Washington kids kicked their ass right in their own backyard. It was pretty good stuff. Talk about lifting a state, lifting a city.

Who is the greatest athlete you ever saw perform?

Boy, I don’t know. I can’t put my finger on one person without insulting somebody else. Remember (Pittsburgh Steelers defensive tackle Mean Joe) Greene? I thought he was one of the greatest players I ever saw, but he was so unlike O.J. (Simpson) the running back or (Roger) Staubach the quarterback or on it goes … [Multisport Olympic athlete] Eric Heiden would be a pretty good choice.

Since your school was too small to field a football team, what sports did you play in high school?

Baseball and basketball. We were a pain in the ass in basketball. A bunch of big ol’ farm boys. We’d box your ears under the basket.

What are the odds on a poor Georgia farm boy winding up at Washington State?

I’d never been to Pullman, Washington. I never even really knew where Washington State College was. There were only 4800 students back then.

One of your signature lines on football telecasts was “Whoa, Nellie!” Where did that come from?

I guess I said it, but it was never a big deal … it was just a fun thing to say once in a great while. The only time I ever knew of hearing it was from my great-grandpa. It was one of his favorite expressions. He was a farmer down in Georgia.