An odd couple in an odd world. 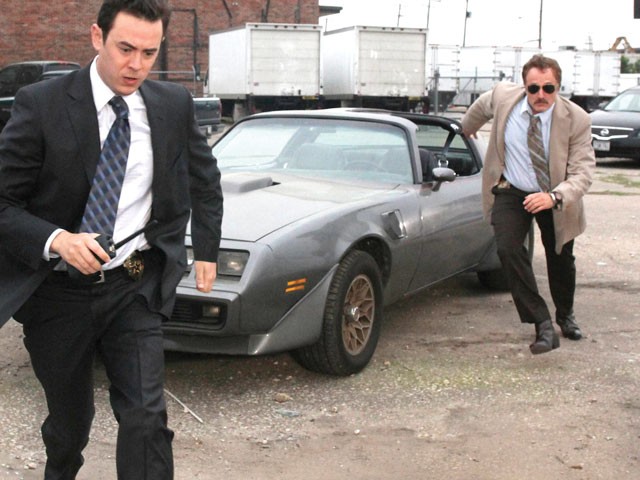 We don’t necessarily ask that the worlds we see on our television be realistic or accurate or anything like our own. All we ask is that the world, as cheesy as it sounds, be true to itself. Every universe — whether flashing with quantum torpedoes or rolling with severed heads — has rules. Break them, break the suspension of disbelief.

An absurd land needs absurd characters. A dead-serious world can’t have one character that always slips on banana peels.

That’s been the problem with the latter seasons of the American Office. Jim, Michael and Dwight all seem drawn from different comic universes — with different rules and genres of humor — and the resulting mashup is discordant.

And that’s the problem with The Good Guys, the new action-comedy police procedural on Fox. Colin Hanks (Tom’s kid) plays a generic police investigator — the kind you’d find in any CSI iteration. He’s assigned to a small crimes unit with Bradley Whitford (The West Wing), a sleazy mustachioed cop with a 1970s-style tendency to wreak reckless mayhem.

The buddy cop comedy formula, of course, is based on trapping two radically different characters together, so you can watch aggravation build and build until it suddenly turns into mutual respect and admiration. By-the-book veteran cop meets loose-cannon rookie. Racial Stereotype A meets Racial Stereotype B.

But in The Good Guys, it’s not just the two cops’ personalities that clash. It’s the tone. It’s flicking back and forth between CSI and Magnum, P.I. Whitford’s character doesn’t make any sense in Hanks’ universe. Whitford isn’t just an old school cop, he’s a Saturday Night Live-style spoof of an old-school cop.

To be fair, several episodes in, The Good Guys is gradually fixing that problem. The plots, characters and dialogue are getting increasingly sillier. With his surroundings becoming more absurd, suddenly Whitford’s moustache doesn’t seem so out-of-place.

It’s a good strategy. If you can’t make yourself less goofy, make the world less serious.

Airs Mondays at 9 pm on Fox

Haven
Once again, the rusty old TV Premise Generator spits out the classic sci-fi TV scenario: A small town chock-full of quirky characters holds horrible secrets and dark mysteries. An outsider investigates and is drawn into the web of oddity. But this time, the series is based on a novella by that master of small-town menace, Stephen King. (Syfy, Fridays, 10 pm)

Huge
Heavy actors? On TV? From the creator of My So-Called Life comes Huge, a drama about kids at weight-loss camp. I’m guessing the tone is going to be substantially different than in that other classic weight-loss camp story, 1995’s Heavyweights, starring Ben Stiller. (ABC Family, Mondays, 9 pm)