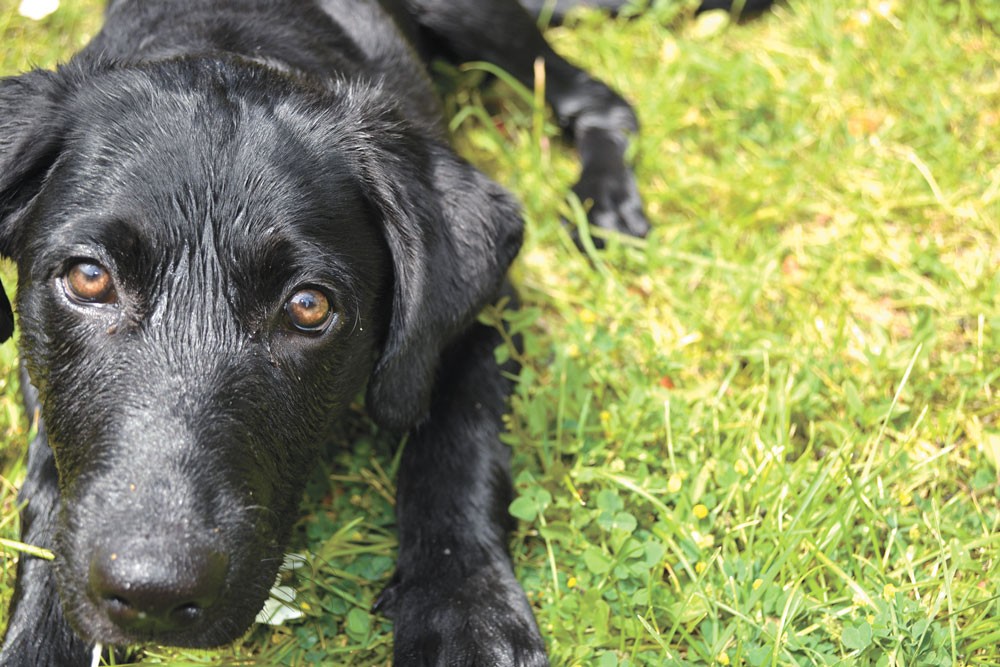 It was Mother's Day and we were having a socially distanced backyard gathering when my partner Heather's adult son mentioned he knew someone who knew someone who was giving away Labradoodle puppies.

Five days later, we joined the many suddenly homebound in rashly deciding to bring a four-legged fur ball into our fold. We didn't discuss it much beyond agreeing that Heather would never have to get up in the middle of the night to deal with the dog, and her teenage daughter would take care of it when I was working. After buying a few supplies, we made our only excursion across the stateline since the 'rona arrived, spending roughly 10 minutes in a Post Falls house to pick up what turned out to be a Labradoodle mixed with a Pyrenees mountain dog.

We named her Daisy and she was just shy of 6 weeks old and weighed 6 pounds when we picked her up. That's younger than a vet will recommend adopting a puppy, but we didn't want to miss out and we figured we were saving her from a life in Post Falls.

We'll probably regret such a dainty name when she tops out in the 80- to 100-pound range. I've already been calling Daisy things like "Land Shark" and "Baby Shark" based on her razor-sharp puppy teeth and predilection for directing them at any exposed skin at least a couple times a day. My hands were pretty dry and tough from all the hand washing brought on by the virus. Now they're scabbed up and in daily need of both hydrogen peroxide and soothing lotion.

Daisy is now 14 weeks and about 25 pounds as of this writing, and the past two months have been a blur. An exhausting, exhilarating, painful, expensive, pee-filled blur. The pandemic puppy experience has been mostly positive, but not without its trials. Here are a few lessons we've learned that you should bear in mind if you're considering getting a new dog at your house.

DO YOUR HOMEWORK
Daisy not being exactly the breed we expected was not a problem for us, but we did some crash-course Googling and YouTubing to learn the various characteristics of her genetic components. You'll want to do the same no matter what dog you're considering, just to make sure you're getting a puppy conducive to your living environment, your family situation, even your work schedule. Puppies all sleep a lot, but they aren't puppies forever and you need to be ready for the decade ahead.

THROW AWAY YOUR SCHEDULE
Puppies are incredibly time-consuming, even with all the sleeping they do. When they're awake, they need constant attention, both with positive play and training, and just keeping them from getting into trouble with their curiosity. If you have a routine you're comfortable with, it might not be easy to suddenly lose the ability to, say, sit quietly with a newspaper or a book when your puppy has other ideas.

GET HELP
We have three people on hand to walk the dog, pick up after the dog, play with the dog, and train the dog, and I think all three of us probably get worn out by it all on a daily basis. I can't imagine doing the puppy thing alone. We also signed up for a puppy-training class, and it's definitely been helpful to have professionals help us out. We found a couple of other folks in our lives with new puppies and schedule weekly puppy play dates so the dogs can wear each other out and learn some social skills with other dogs during these locked-down days. Even though we're locked down, your puppy needs to learn from other dogs and other humans, too.

EMBRACE THE CHAOS
The puppy stage is just that, one stage in a hopefully long life. So while it's tiring always, and trying at times, it's good to remember that your pup is hopefully going to grow into a great companion. And if you have more time at home due to the pandemic, take advantage of the extra time with your pup and enjoy the snuggles, games of tug-o-war and walks around the neighborhood. You should also consider every ripped T-shirt or pair of shorts an opportunity to up your wardrobe game.

As soon as we adopted Daisy, our focus on the scary disease running rampant across the globe greatly diminished, thanks to our focus on this new cute creature hanging around the house. That's not necessarily the best reason to adopt a dog, but it's definitely a bonus. ♦

The original print version of this article was headlined "Baby Shark"