A melodrama that begins with (high-end) prostitution and still manages to avoid being sleazy. 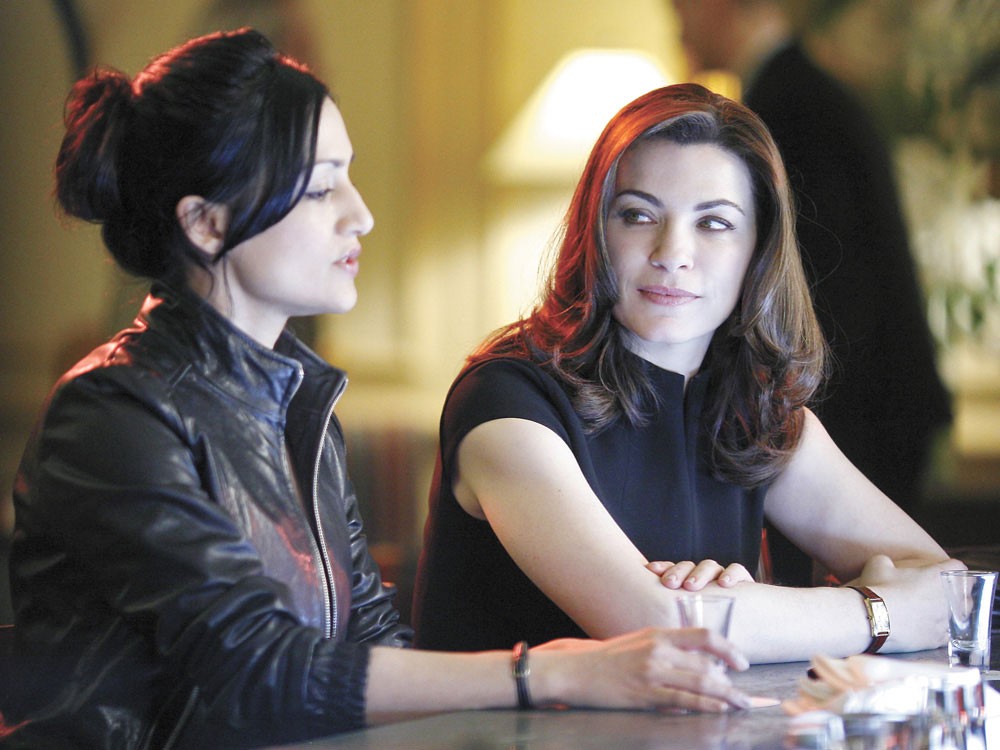 Left: Emmy-winner. Right: The one who deserved it.

Faced with recordings of all Tuesday’s television, I betray my demographic. I don’t watch Glee or Sons of Anarchy or No Ordinary Family first. No, I go straight for The Good Wife.

Season 1 began with an iteration of that classic press-conference image: Once-respected politician admits to affairs with high-priced prostitutes. And there’s his wife, his betrayed but ever-loyal wife, standing nobly beside him.

In this case, the politician is Peter Florrick (Chris Noth, Sex and the City), a state attorney accused of abusing his office to hire prostitutes. The good wife is Alicia Florrick (Julianna Margulies, E.R.), who’s now taken a job as a junior litigator.

Since each episode focuses on a case at the law firm, at first glance the rest of The Good Wife seems another legal procedural in a landscape that’s been overstuffed with various Law and Orders for the past 50 years. But it’s not.

Each case — and narrative structure — is unique. Sometimes they’re defending a wealthy sociopath, other times they’re suing a corrupt insurance company. Sometimes the key to victory is exploiting a legal loophole or identifying a vulnerable juror. Sometimes the defendant they get off is, well, guilty as hell.

It’s not a procedural. Not really. It’s an evolving character-driven serial, clad in a well-pressed procedural suit.

Alicia is the perfect portrayal of a strong but deeply wounded woman.

She isn’t one for histrionics or dramatic speeches. Instead, she’s largely drawn within herself, letting her weary eyes and protective posture communicate her pain.

From that moment at the press conference, the show sets into motion a variety of conflicts that keep the series vibrant. Alicia must decide between staying with her (handsome) cheating husband as he tries to clear his name of corruption charges and reinvigorate his political career, or pursuing her (handsome) boss (Josh Charles, In Treatment), whom she knows from her past. She must navigate office politics, family politics and politics-politics.

And it’s a credit to the top-notch acting and pacing that all that melodrama — that begins with high-priced prostitution — never feels sleazy.

Smallville
Ten years. That’s how long Clark Kent has been growing from Superboy to Superman. This is the final season, so this is the moment when the 20something of Steel must don the mantle of Superman’s cape — and Clark Kent’s mild-mannered reporter glasses — once and for all. (Fridays, The CW, 8 pm)

Supernatural
It’s always a bit of a letdown, following an Apocalypse. Everything else seems a bit anti-climatic — nothing has quite the same fire-and-brimstone zest. But this Buffy-in-flannel fantasy drama continues, with the brothers Winchester returning to their old boring life of monster slaying. There’s nothing like having gone to hell and back to ramp up the sibling rivalry. (Fridays, The CW, 9 pm)

Eastbound and Down
Guff-talking, chaw-chewing, booze-binging Kenny Powers (Danny McBride, Tropic Thunder) was once a star pitcher. That is, until his obscene — and hilarious — antics got him kicked out of the major leagues. In the second season, with his chances of returning to the show even smaller, Powers makes a fresh start in a small town in Mexico. Hijinks, two nations pray, shall ensue. (Sundays, HBO, 10:30)