The Great Dine Out kicks off during a warm spring weekend, with a lasting recovery in sight for the hospitality industry

Raelene and Tony Elliott, owners of Elliotts an Urban Kitchen

he first weekend of the Great Dine Out, paired with a peek of spring and the good news that restaurants can return to 50 percent capacity starting March 22, made for a positive start to the pandemic-recovery focused event.

Staff at participating restaurants across the region say they feel all those factors contributed to increased turnout during the event's first several days.

"It's been busier than it's been in quite a good time. Right now, things do look really good for [the restaurant's] future if we keep going in a reopening direction," he continues.

For the Great Dine Out, Uncle Rusty's is spotlighting several bestsellers: its chicken and waffles ($14) made with a hand-breaded chicken breast atop pecan waffles, a breadbowl scramble ($9) — Northcraft says this is a popular takeout item since it travels well — and its jalapeño ranch burger ($14).

A few miles north, a neighborhood eatery in Emerson-Garfield celebrated its first weekend back open after a rather long hiatus.

ELLIOTTS AN URBAN KITCHEN reopened last Monday after many months, and co-owner Raelene Elliott says it's been a welcome homecoming for her and husband Tony Elliott, the restaurant's chef, plus all her staff and regular customers.

"It feels good to have my job back, doing my thing and seeing all my friends," she says. "We're excited to have everyone back in and catch up on what we missed out on."

She says the restaurant welcomed back a good mix of regulars who came out to savor favorite dishes off the Elliotts' menu, along with folks coming in for the first or second time.

For the Great Dine Out, Elliotts is featuring its bestselling Scotch egg ($5) , a six-minute, soft-boiled egg encased in seasoned sausage that's then breaded, fried and served open-faced over a bed of coleslaw.

Elliotts' fried chicken sandwich ($14) and pork green chili ($11) are two other house favorites being showcased during the event.

The couple's second restaurant, which opened just a few weeks before the COVID-19 shutdown last year, is also participating in the Great Dine Out. HILLYARD PUB + GRUB originally debuted as a pizza place, but after the shutdown the Elliotts decided to shift focus from pizza to classic pub fare.

"I'm just really grateful that people are excited for us to be back. Because we are, and it feels good to be doing what I love, and being back in my element. And of course to see my employees — they are like family."

An early menu standout there has been the Harmon Park Board ($15), a charcuterie-inspired snack plate that's served on a repurposed skateboard deck, in a nod to Hillyard's own skate park in Harmon Park.

"It's definitely our most popular item because it's also on the happy hour menu from 2 to 4 pm for $7," Raelene says.

Rounding out the Hillyard pub's Great Dine Out offerings is a half-pound, all-beef chili dog ($11) with house-made chili and the pub's Italian sandwich ($11), a melt piled with salami, pepperoni, peppers and provolone cheese with house vinaigrette.

"I'm just really grateful that people are excited for us to be back," Raelene says. "Because we are, and it feels good to be doing what I love, and being back in my element. And of course to see my employees — they are like family."

cross the state border in Idaho, things also picked up over the weekend at SWEET LOU'S RESTAURANT AND TAP HOUSE.

Owner Chad Foust says the early arrival of warm spring temperatures brought lots of folks out and about in downtown Coeur d'Alene, where his restaurant is located, overlooking McEuen Park.

"When it's beautiful like this in the springtime, people flock to downtown Coeur d'Alene, where you can oversee the park and the lake," Foust says.

He expects the trend to continue into next week, and says Sweet Lou's patio will also be open for the second weekend of the Great Dine Out.

So far, customers have been enjoying all three items Sweet Lou's is highlighting for the Great Dine Out. Foust says the blue cheese mushroom sirloin steak ($20) and 60/40 burger ($14), made from certified Angus beef and bacon, were top sellers. While its signature item, bison ribs ($22), didn't sell as much as those two dishes in Coeur d'Alene, Foust says it was a standout at Sweet Lou's Ponderay branch. While that location isn't officially participating in the Great Dine Out, he says his team opted to feature the same three dishes to customers there. 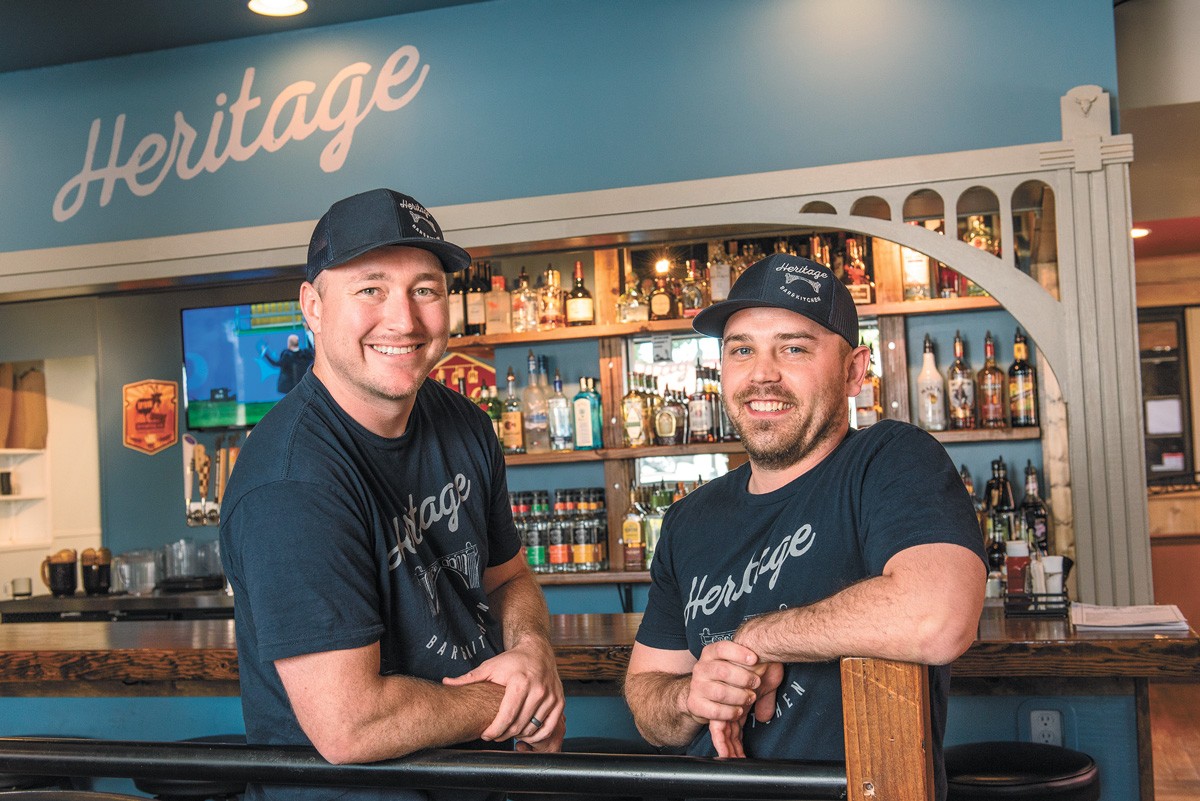 Back in downtown Spokane, HERITAGE BAR AND KITCHEN also saw a boost in sales last weekend.

Co-owner Gabe Wood says the restaurant is highlighting three of its bestselling, signature dishes for the Great Dine Out.

The latter is a dish named after and created by Heritage co-owner Alex King's mother, and consists of two handmade meat pies stuffed with seasoned ground beef, onion, tomato and cheese.

While Heritage's operations this past year have fluctuated due to the various levels of restrictions on restaurants, Wood says he's optimistic that the Great Dine Out and spring's arrival will jumpstart economic recovery for local restaurants.

"We're really excited for the future and are feeling like we're in a good spot to bounce back and get to where we were pre-pandemic," he says. "The pandemic has definitely been hard on us — our sales leads are less than half of what they were prior to COVID-19 — but since the reopening we have seen a really good turnout both from returning customers and new customers joining us for the first time."