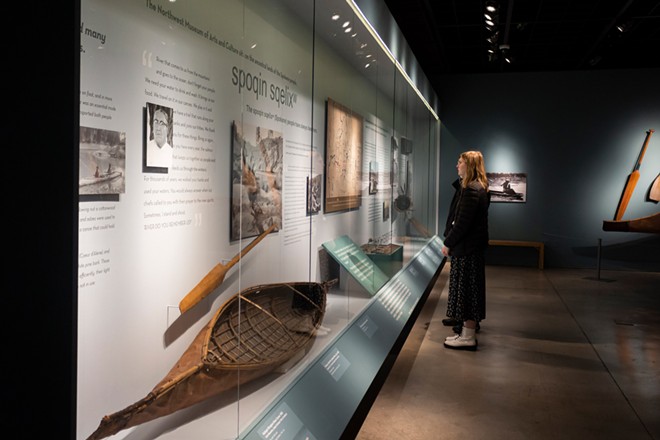 Alyssa Hughes photo
The exhibits will draw you to the MAC. The air conditioning might keep you there once the heat hits.

If recent summers are any preview, it's best to be prepared for the chance your outdoor summer plans could go awry. You know, when a blanket of lung-damaging wildfire smoke descends on the region for weeks, or another 100-degree-plus heat wave makes stepping outside feel like a tormenting blast of hellfire. Maybe it's even a rainy day, considering we've had such a wet spring. Heading to the mall or a movie is an easy option, but we dug a little deeper for these alternatives.

GO TO THE MUSEUM

With the bliss of air conditioning and enough to see and do that you'll be occupied for at least an hour or more, museums are the perfect reprieve when it's hot, smoky, rainy or otherwise unpleasant. Among the region's museums that range from smaller, community-run venues to the region's go-to, the MAC, here are some exhibit highlights to put on your summer to-do list.

Families and film buffs alike can enjoy the NORTHWEST MUSEUM OF ARTS & CULTURE'S marquee summer exhibit, Dreamworks Animation: The Exhibition — From Sketch to Screen, on display through Sept. 1. Learn all about the art and technology that brought films like Kung Fu Panda to life. Other exhibits you'll want to see at the MAC include a look back on the region's wheat industry in Golden Harvest: Flour Sacks from the Permanent Collection (through Oct. 30), plus the Native culture- and history-focused Awakenings: Traditional Canoes and Calling the Salmon Home (through Aug. 21). Find hours, admission and more at northwestmuseum.org.

Take a drive to Washington State University's JORDAN SCHNITZER MUSEUM OF ART, which has two main showcases: Our Stories, Our Lives: Irwin Nash Photographs of Yakima Valley Migrant Labor and Keiko Hara: Four Decades of Paintings and Prints. The Irwin Nash collection features photos of migrant farm laborers from 1967-1976 amid a period of rising labor and protest movements. The spotlight on Keiko Hara is a retrospective of the Walla Walla-based artist's career as a Japanese woodblock printmaker. Admission is free; find info at museum.wsu.edu.

History lovers and railroad aficionados can head east or west to get their fill of rail-centric museums in Wallace, Idaho, or Reardan, Washington. Go east on I-90 to get to the NORTHERN PACIFIC DEPOT MUSEUM, where visitors learn about the essential role railroads had in developing the Silver Valley's legendary mining industry, and how the historic depot was physically moved and preserved at its current site. The depot remains mostly unchanged since its days as a regional hub, from 1901 to 1978. Learn more at npdepot.org.

Go west on Highway 2 and just past Reardan, you'll see an unusually placed collection of train cars off in a field. That's the INLAND NW RAIL MUSEUM, which resided at the Spokane Interstate Fairgrounds for 30 years before reopening at its current location in 2016. From model train displays to restored train cars and equipment, plus its mini train ride, "The Reardan Rocket," there's tons to see and explore. Hours, admission prices and a special event schedule are at inlandrailnwmuseum.com.

Even more regional museums are waiting to be explored, including the SPOKANE VALLEY HERITAGE MUSEUM (spokanevalleymuseum.com), Coeur d'Alene's MUSEUM OF NORTH IDAHO (museumni.org) and the HISTORIC FLIGHT FOUNDATION (historicflight.org) at Felts Field.

CLEAN OUT YOUR BASEMENT

No, really. An ideal time to retreat to the cool confines of underground concrete walls is when it's hottest or smokiest outdoors. If you're like me, your basement has at least a few piles of "stuff" that needs dealing with, whether stashing it in more organized fashion, selling it online or donating it to a local nonprofit. For the latter, consider places like the Arc of Spokane, YWCA Spokane's women's clothing bank, World Relief Spokane, Teen & Kid Closet and other locally run groups. When you've finished, you'll feel so good. Crack a cold one — you deserve it!

Courtesy photo
Kids will love the River Rumpus at the "new" Central Library.

Several Spokane Public Library branches have recently been rethought and revamped as public spaces for learning, gathering and idea sharing. While checking out some good summer reads is a must, there's lots more to see and do at those reopened branches, which also offer a welcoming, cool and smoke-free environment when being outside (or at home) is unbearable.

When the SHADLE PARK branch reopened last fall, it debuted several new amenities, including the "Moose's Market" children's play area, a quiet room for studying and reading, a discovery garden, demonstration kitchen and more. On the east end of town, the LIBERTY PARK branch also reopened with similar amenities, such as the "Sasquatch Shack" kids' space, plus a curated local art collection.

Meanwhile, the downtown branch, renamed the CENTRAL LIBRARY, is set to reopen July 11, debuting a reworked floor plan that also features a kids' space called "River Rumpus." Other new amenities include a music and media recording studio, cafe and retail space, and the new home of local radio station KYRS. A grand reopening celebration for the Central Library is set for Monday, July 11, from 9 am to 3 pm. For more info on all the branches, visit spokanelibrary.org.

Thanks to the time folks spent in isolation these last few years, collectible trading card games, aka "TCGs," saw a big resurgence. Whether you're brand new or picking up where you left off as a kid with games like Pokémon and Magic: The Gathering, the Comic Book Shop's NorthTown Mall location offers weekly opportunities to brush up on or learn a new card game. If you're immediately hooked, the shop has all the booster packs, deck boxes, dice and other supplies. Then, check out game tournament schedules at its three locations so you can, as they say, " pwn the noobs."

RAGE AGAINST THE MACHINE

Feeling pissed off, brokenhearted or just want to smash some stuff without feeling bad about it? Spokane's newest "rage room," Rage Xscape, opened last year and offers an outlet for all that and more, and in a climate-controlled, windowless setting. Located downtown, at 122 S. Division, ragers ages 12 and up can reserve a time to become "masters of destruction." For package details and to book, head to ragexscape.com.

ILF Media photo
Silver Rapids in North Idaho delivers all the water fun you want — inside!

Here in the Inland Northwest, a lot of the things we like to do outside in summer are also accessible inside, and year-round, including a relaxing swim. You can still beat the heat, and (safely) skip the sunscreen! At the SILVER RAPIDS indoor water park at Silver Mountain Resort in Kellogg, Idaho, overnight guests (a limited number of day passes are also available) can enjoy the park's lazy river, an indoor surf wave, kids water area and much more. While it's not the same as going to the lake, when that's off the table, it's perhaps the next best thing. North Idaho is also home to Triple Play's RAPTOR REEF water park, which boasts a wave pool and loads of prehistoric-themed indoor water features.

Got a need for speed? Indoor go-kart racing at DirtKart can sate it, with daily racing opportunities (10 am to 10 pm) at its locations in Spokane and Post Falls. For $25, you and a group of friends can put the pedal to the metal and see who'll cross the finish line first in a 25-lap race at the indoor, dirt-surfaced racetrack. For info and to book, visit dirtkart.com. ♦

2022 promises to be the most lively summer in years, and we are so ready for it