If you go out looking for nachos in Spokane, you'll find a lot more than chips and cheese 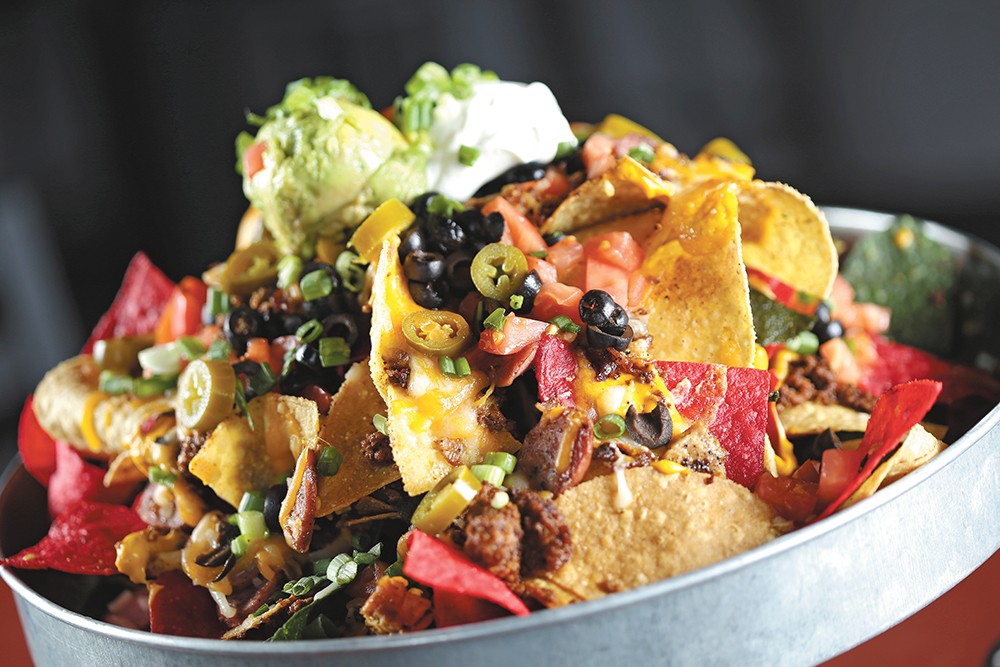 Young Kwak
Trash Can Nachos at Spike's Phillys and More.

What we found is that pretty much everyone is serving nachos, and they are all very different. We've got pizza ingredients, potatoes used in place of chips and proportions so large as to require garbage can lids. We even let vegans into the mix. Here are the results of our hunt.

Cheez Whiz and Easy Cheese are not the same fake cheese products. Both are meant to go in your mouth, but Cheez Whiz comes in a jar and has a queso consistency, where Easy Cheese is squirted from an aerosol can directly onto the surface/orifice of preference.

This is what Travis Bertholf wants people to understand when ordering Spike's massive Trash Can Nachos.

"People see Cheez Whiz on our menu and confuse it with Easy Cheese," says the front-of-the-house manager. "But it's much better than that."

A staple on the classic Philly cheesesteak, it made sense for the establishment, famous for the sandwiches, to add the cheese to its nachos dish. True to its name, the pile of warm, salty deliciousness is served on a (clean) trash can lid. The tri-colored tortilla chips are not only topped with Cheez Whiz, there's also real cheddar cheese, black olives, cilantro, black beans, tomatoes, seasoned beef, sausage, bacon, chicken, chili, sour cream, jalapeños, green onions, salsa and guacamole.

According to kitchen manager Shaun Mazur, the item is one of the restaurant's most popular since the place first opened two years ago. He says he receives multiple orders for the platter during every shift he works.

Tortilla chip purists shouldn't let the substitution of potatoes for corn be a reason to shy away from this twist on the bar-food staple. This indulgently rich and savory concoction is so damn good it could, and would, put many traditional tortilla varieties to shame. Starting with a plentiful base layer of Hop Jack's housemade potato chips — the thick, crunchy kind that aren't soaked in oil and salt — these nachos then get serious with a generous amount of tangy, sharp bleu cheese crumbles. The rest of the toppings don't skimp, loading it up with plenty of black beans, corn, green onions, tomatoes and bacon crumbles.

And you know how sometimes restaurants just dump all the toppings right in the middle of a heaping chip mountain, forcing you to ration out cheese and meat pieces for the naked, bottom-layer chips? Not here. Hop Jack's takes care to make sure every square inch of exposed chip surface area is equally coated in melt-y cheese, bacon and veggies. While the copious amounts of bleu cheese could be a bit overpowering for some near the end, there is an option to sub in cheddar cheese, or add both. If you're still not sold on the genius idea of using potato chips in nachos, Hop Jack's offers a classic tortilla-chip version. — CHEY SCOTT

As one of our readers put it, the reliable recipe for nacho success is cheese + _____ + chips = awesome! But the vegan nachos at Neato Burrito prove that recipe is not a rule, because replacing cheese with Thai-style peanut sauce makes for a surprisingly tasty and appropriately filling plate of nachos. The gently spicy sauce mingles with potatoes, beans, salsa — try the popular corn salsa plus a dab of something spicier — and contrasts with the cool guacamole and shredded cabbage on top. The basic out-of-bag corn chips are the weak point, but do a perfectly fine job of the chip's most important duty as a topping delivery system. The whole effect on the plate is something like a shattered burrito — and that's a good thing, especially if you're trying to share. Non-vegan nachos are also available, of course, but split a plate with a couple of omnivores some evening after a few drinks and see if they're not won over.

These are your classic nachos — the sort of multicolored tower of delectableness your mind might conjur when your stomach tells it to eat some nachos. Monterey, known for doing everything big, doesn't skimp on proportions, starting off with a pile of crunchy Juanita's tortilla chips, adding chicken or beef (go for the chicken), a secret spicy sauce and an appropriately absurd amount of cheese. Request jalapeños, onions and other peppers to spice things up even more, and they'll gladly do it. The salsa and sour cream is served on the side, but if you're as reckless with your nacho consumption as me, you'll dump that stuff on top and let gravity do the rest of the work.

This is the most standard of the nachos featured here, but Monterey does know how to get weird with its nachos. In addition to the Beach Bake, the downtown cafe/bar also has the Alabama Bake, which featured pulled pork, the Buffalo Bake, replete with buffalo chicken and blue cheese, and the Siciliy Bake, which takes pizza ingredients like pepperoni and marinara and tosses them atop chips.