Connor Halliday is guiding the Cougars to their first bowl game in a decade, one pass at a time 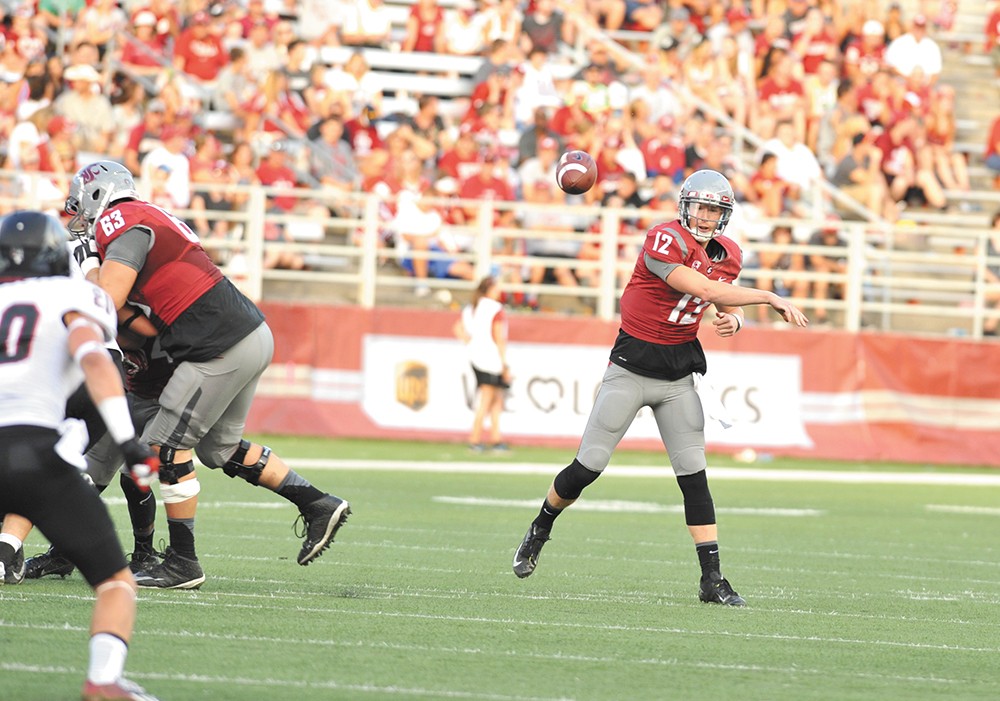 Spokane native Connor Halliday has thrown for almost 4,000 yards this season and has put WSU in line for a bowl appearance.

Opposing defenses have spent decades trying to figure out how to stop Mike Leach's high-octane, no-huddle, pass-happy offense. In most cases, defenses have experienced little success and considerable frustration.

Spokane native Connor Halliday knows the feeling, even though he'll be playing quarterback for Washington State when Leach's Cougars try to cement their first bowl berth in 10 years Friday at Washington.

"He came in last year," Halliday recalls, "and he tells you a little bit about the offense, but that's it ... even if you're not getting it."

Halliday shared the starting job last season with Jeff Tuel, who now plays for the NFL's Buffalo Bills. Both players were shocked to discover how much play-calling Leach entrusts with his quarterbacks.

"He doesn't call very many plays," Halliday says. "I'd say 70 percent of the time ... he'll call the formation, and then I call the play."

"He says, 'I can give you a play, but how am I going to know if that play is going to be right?'" Halliday says. "'You're the guy out there that sees it. I'm on the sideline.'

"'I can't see where everyone is. I can't see the leverage of the corner(back). I can't see who's blitzing. You're the guy who can see all that perfectly. Why am I going to sit here and overrule you when you have a better view of it than me?'"

Halliday starred in a pass-oriented offense at Spokane's Ferris High School, but nothing fully prepares a quarterback for Leach's pass-'til-you-drop style of offense.

The Cougars pass more and run less than any other team in major college football (the 123-team Football Bowl Subdivision). Halliday ranks third in the nation with 3,905 passing yards (355 per game), first with 597 pass attempts (a Pac-12 Conference record with a couple of games left to play), tied for 12th with 26 touchdown passes and, alas, first with 19 interceptions.

Halliday has learned to tone down his gunslinger instincts this season, settling for the many short passes available in Leach's offense instead of constantly looking to throw the long bomb. Halliday has thrown just two interceptions in the past three games, and he set an FBS record with 89 passes and Pac-12 records with 58 completions and 557 passing yards in an Oct. 19 loss at Oregon.

Halliday might be even more respected for his leadership and toughness than his skill. Although he scatters just 190 pounds on a 6-foot-4 frame, Halliday is more than willing to take a hit.

Asked to name the toughest player on the team, hard-nosed linebacker Darryl Monroe immediately blurted, "Connor Halliday." Monroe well remembers Halliday (unknowingly) playing with a lacerated liver most of the game in his first college start two years ago. Halliday simply waited until the end of the game to check himself into the hospital.

The Cougars are 6-5 overall, 4-4 in the Pac-12; the Huskies are 7-4 and 4-4. Six wins makes a team bowl eligible — many observers consider WSU a lock for a bowl, regardless of Friday's outcome — but seven wins guarantees a team will go bowling.

"It would be terrible to put in all that work, build this program from where it was on up and leave it to old guys [bowl officials] making decisions," Halliday says.

The Cougars finished last four straight years prior to this season, and it took Halliday four years (counting a redshirt season as a freshman) to earn a full-time playing role. He says he never considered transferring, even to schools like Boise State (where father Duane was a backup quarterback), Eastern Washington and Idaho that recruited him out of high school.

"I just love this place," Halliday says. "There's been some definitely tough times, some frustration, some nights of pulling my hair out. But ever since I've committed here, I've always wanted to be the guy that starts it — the first quarterback to turn this place around. Maybe I'm crazy, maybe I'm delusional, but I've never wavered from the thought that I'm the guy that can do it." ♦