The Hall of Fame skier who became a legend 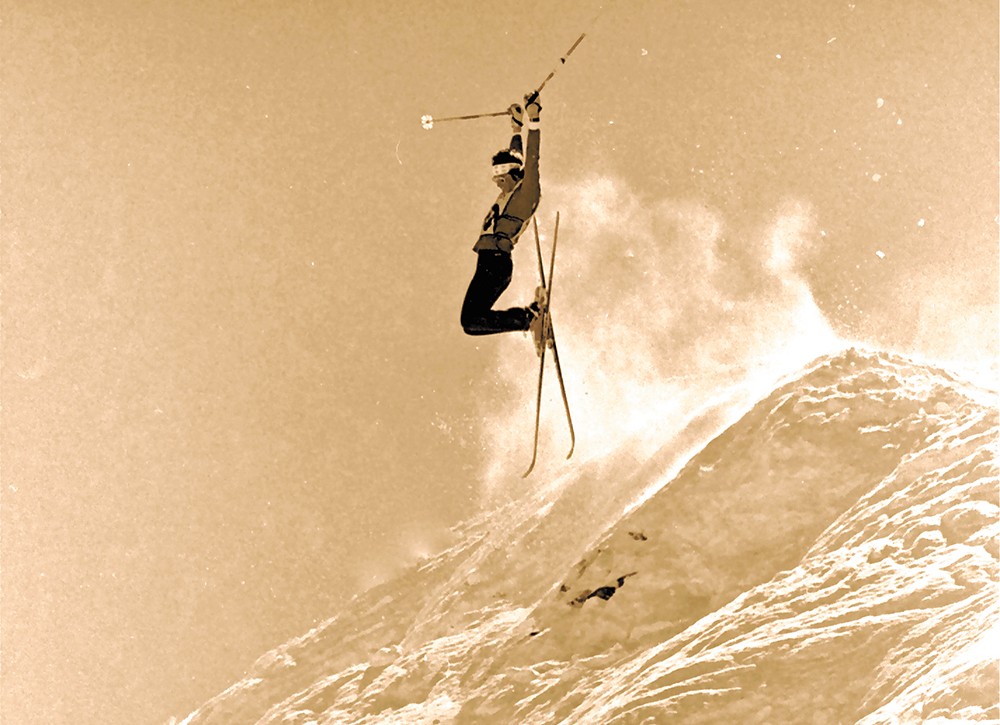 As I approach my 42nd year of skiing, I can't help but look back at the people who influenced me to take up and excel at this lifestyle sport. There's everyone from Dave Bucher, who introduced me to skiing at Heavenly Valley back in 1976, to the skiers/friends I met when I moved to Coeur d'Alene in 1978 like Terry Bushfield, Pete Mohr, Dan Herby, Joe Hurrell and Mike Beery. It was here that my interest in freestyle skiing started, and this group of guys took me under their wings and helped me progress in this relatively new sport. Back in the mid '70s freestyle skiing was the rage like snowboarding was in the '90s. All of the ski movies and ski magazines spotlighted freestyle skiing and freestylers like Suzy Chaffe, Wayne Wong and "Airborne" Eddie Ferguson with his signature mule kick, just to name a few. As a young teenager these were my ski idols I looked up to.

It was in the spring of '78 that I saw an ad for Airborne Eddie's freestyle summer ski camp, which would be held at Sunshine Village in Alberta, Canada, the first few weeks of June. Herby, Beery and I each begged our parents to let us go to this 10-day snow camp and be coached by Airborne Eddie himself and his staff of other well-known freestyle ski coaches. All of us came back after our session with a newfound admiration for the sport and our ski icons like Ferguson were now larger than life. The next winter our newly taught skills were showing promise and by April in '79 my parents decided to give me another session at Airborne Eddie's as my high school graduation gift. 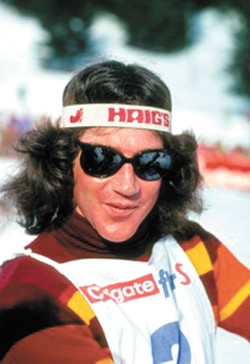 While Ferguson was best known for his mule kick, he had lots of tricks in his repertoire.

The second year at Airborne Eddie's came and went like the previous camp, before our skill levels had improved. Right after high school both Herby and I went off chasing this dream and moved to Squaw Valley to live and compete in the freestyle ski world. Airborne Eddie set the stage for me with his ski camps. Since the early days Airborne has always been that icon I admired and over the past few years I've been able to reconnect with Airborne Eddie Ferguson. Last spring I was able to witness Airborne Eddie get inducted into the U.S. Ski and Snowboard Hall of Fame at an event held in Squaw Valley, California. I met up with Eddie and long-time friend Phil Sifferman at Mission Ridge for a fun day of skiing before the Hall of Fame induction in April.

Speaking with Eddie about his Hall of Fame induction, you could sense that he was extremely honored to be nominated.

Eddie Ferguson has been living in Lake Chelan as a realtor for 30 years. He's a fanatic about his fishing, golfing and skiing, making Lake Chelan the perfect home base. Talking about his home, Eddie had this to say, "Life has been very good to me. Skiing is an hour from my house. I can go steelhead fishing within 20 minutes, put my boat in the water and catch 18-pound steelhead that are wild and just nuts. And I'm about a driver and a four wood away from the golf course from my house. I play a lot of golf."

Eddie Ferguson's ski career has been exciting to say the least and you could see the joy in his face as he spoke about growing up and skiing in the Boise area.

Eddie told me about how he began skiing, "I got started on Army, Navy surplus skis that my dad got from the Navy for free basically. He'd drag us behind this old Mercury out in the subdivision."

At 8, Eddie moved on from skiing behind the Mercury and started skiing at nearby Bogus Basin. A few more years later and by the very young age of 14 he was teaching skiing. He heard that if he taught skiing he could get a free ski pass. By the time Ed was 16 he was already a fully certified instructor. Eddie commented, "So, by the time freestyle skiing came around, I had all the basics really, really down pat. And I could ski pretty good."

Inspired by some of the early ski movies The Magic Skis and The Moebius Flip, Eddie was drawn to getting his skis off the ground. "I was already going off the mine jump at Alta, with Pepi Stiegler and Junior Bounous and some of the boys, I was getting the big air. And my nickname, Airborne, wasn't an accident. Let's just put it that way."

In 1972, Eddie entered his first freestyle skiing event held at Sun Valley. Airborne made an impression, "I can't remember where I placed. I think I was second in that one and then it was kind of history from then."

Eddie was able to secure sponsors and he traveled and competed in Freestyle in North America and Europe. Eddie recalls, "I was in every event that I could get in and made a lot of money, and had a lot of fun. At one point I believe I was the highest paid ski bum in the country. When somebody would put a big event on in Europe and we had 10 days we could squeeze in, we'd charter a 727 and 35 of us would pay for it and fly over there, get in a competition, make enough money to pay for our way home." Charter airplanes? Now that's pretty impressive for a ski bum.

Airborne Eddie had his signature jump that he would always do. Eddie's eyes lit up when he said this: "Oh, the mule kick, obviously. Lot of times people called it the Fergy. Yeah, that was my favorite and in moguls, that was kind of my calling card."

One of Eddie's most recognized competition mogul runs was at Look Ma at Vail. Here's the play by play, according to Eddie. "When it was my second time to go, no one had beat my first run, so I didn't have to ski that run. And I said, 'OK, this is gonna be fun and we're gonna make this memorable,' so I hiked up about 15 feet above the start gate and instead of making a turn into the run, I jumped into the run and threw out a mule kick. I got a perfect score and I had a ball doing it."

Eddie retired from competition in 1981 after hurting his knee badly and he went back to Boise and opened up a ski shop called Team 2 Sports where he ran into some difficulties, he says. "I had a real rough time of it. The ski area was only open two weeks in two years. The first year was fine with our 5,000-square-foot ski shop, but you can't sell skis if it doesn't snow." 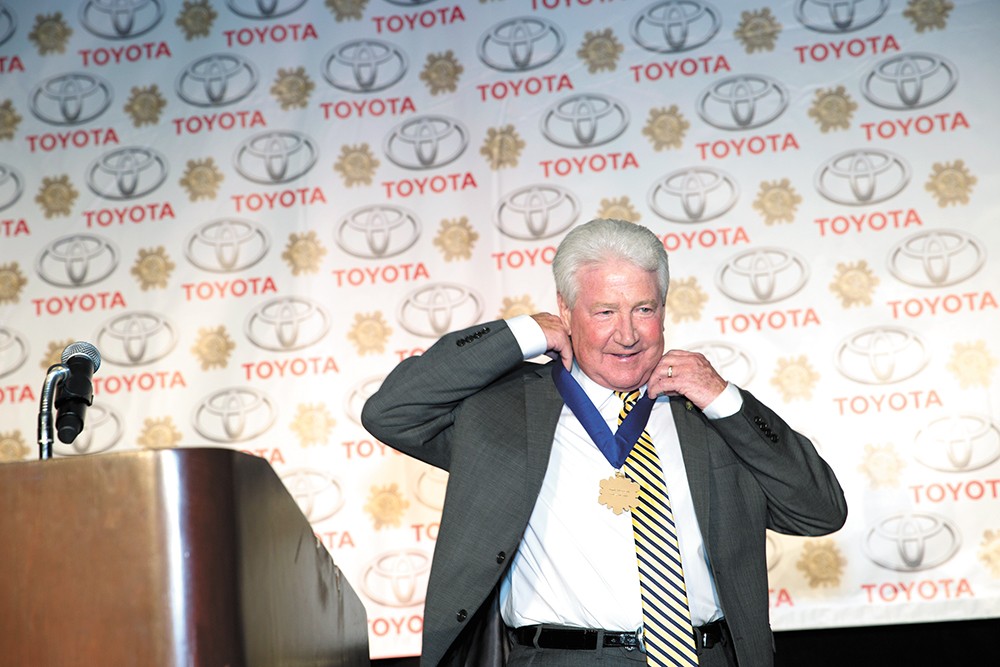 Last spring Airborne Eddie got inducted into the U.S. Ski and Snowboard Hall of Fame at an event held in Squaw Valley, California.

From there Eddie moved on into real estate. "I went into the real estate business at Angel Fire ski resort in New Mexico with some friends of mine from freestyle skiing. I lasted down there until about 1988 when I found my dream home here in Chelan, Washington."

One of Eddie's long-time freestyle friends, Phil Sifferman, the original "Shake and Bake," also lives on Lake Chelan. Back in 1977 on ABC's Wide World of Sports, Eddie and Phil were battling for first place at a freestyle competition at Snowbird when the host, Bob Beattie, asked Phil about his run, and Phil blurted out that famous quote, "Shake and Bake." Phil and Eddie were fierce competitors back in the day, and these two spend a lot of time together in Chelan.

"Phil Sifferman is my best buddy from years and years ago. We've known each other for 50 years probably, we ski about the same, we golf about the same. He's not a big fisherman, but that's fine. We love to come up skiing at Mission Ridge because we can be here in an hour, make a couple hours' worth of runs, have lunch, go home, and it's still three o'clock in the afternoon."

Riding the chairlift between these two I felt like I was in the movie Grumpy Old Men with their bantering back and forth. Eddie piped off with this comment, "Well, we like to get on the chairlift and Phil tells lies. Phil's a better liar than I am. So I gotta really work on my lying technique to stay up with him."

Life has treated Eddie Ferguson well, and I can think of no one better or more deserving than Eddie to be placed in the Ski and Snowboard Hall of Fame. For a man with so much character, he's truly humbled with this honor.

"It's very humbling, and I'm very proud of it. Something I did 45 years ago has turned into a big honor."

As this ski season is about to get underway, take a minute and think about the person who introduced or influenced you to start skiing or snowboarding. If you can still reach out to them, thank them for introducing you and providing you with a lifetime of ski memories. Hopefully over your skiing and snowboarding days you introduced someone to this lifestyle sport. I'm looking forward to the next time I can ride the chairlift and make some runs with Airborne Eddie Ferguson. ♦