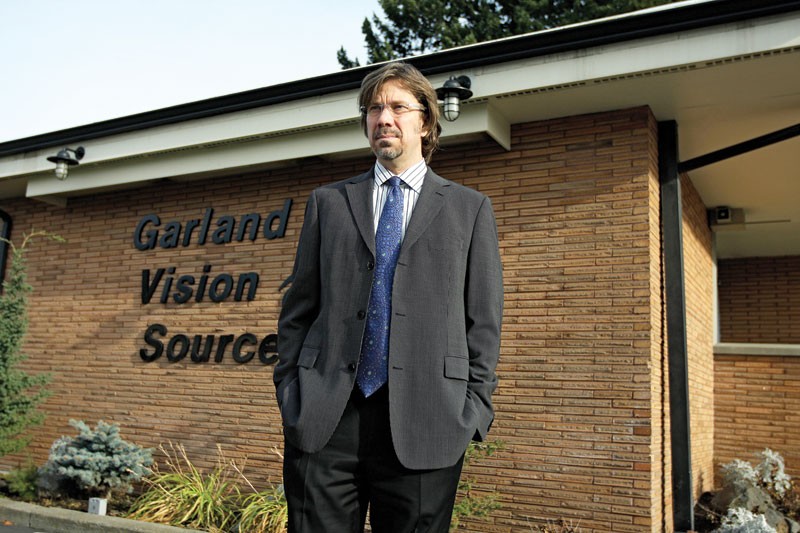 Young Kwak
Brett Hagen is one doc who understands the issues patients have with insurance.

Dr. Brett Hagen got into the optometry business because he loves just about everything about eye care: helping people see clearly, healing infections, providing fashionable eyewear.

But those upsides have come with a constant juggling act. As owner of Garland Vision Source, Hagen must relentlessly study health plans, communicate regularly with his insurance broker, and constantly crunch numbers to make sure his business can provide health benefits to its workers.

“It’s sort of like being in a pond, and standing on a lily pad, and every year the one I’m on disappears into the water and I have to jump to the next one,” Hagen says. “Every year [insurance companies are] changing our plan and raising premiums, and we’re jumping to another to see if we can control the costs and still provide that.”

Hagen is one example of a small-business owner fighting skyrocketing costs brought on by medical technology, expensive drugs and an ever-changing regulatory system, among other things.

Garland Vision Source struggled for years to rein in rising insurance costs. Five years ago, Hagen took a new approach by moving from a traditional plan to a Health Reimbursement Account, which slowed the double-digit premium increases.

Under the HRA account, Hagen chooses a higher deductible plan from the insurance company — he was up to $2,500 last year. His employees pay the first $500 of the deductible, and Garland Vision Source picks up the remainder. If a worker spends the entire $2,500, the traditional health insurance plan kicks in. With the HRA, Hagen’s yearly health insurance increases have come drastically down from the double-digit days.

“Throughout the last five years, we’ve had single-digit [premium] increases, and one year we even went down 3 percent,” he says. “And it’s all because we’re purchasing higher premiums, and the insurance companies know that if you’re purchasing a higher premium, the odds of them having to pay a significant dollar amount are lower.”

Nationwide, insurance rates rose 9 percent in 2011, while costs increased only 4 percent, according to Dr. Charles Roehrig, director of the Center for Sustainable Health Spending. “There’s evidence that [insurance company] profits have been high so far in 2011,” he says. But he says the rate increases are not as substantial as in the past.

“It’s still a big problem, but it certainly has moderated recently,” says Roehrig. “I think some of it is probably [that] spending for commercially insured persons is going up faster,” he says. “For whatever reason, the insurance companies decided it was time to jump those levels.”

As his rates increased, Hagen would always ask his broker or insurance company representatives why costs were rising. He’d get generic answers, like medical technology was getting more expensive.

In a typical example, health insurance provider Asuris recently asked for an 8.6 percent rate hike for its small group health plans, according to the commissioner’s website. The commissioner’s office rejected that number, saying Asuris did not correctly factor in how much its costs would increase. The commission — which must sanction any rate changes — instead approved a 7.2 percent premium change, which will take place this month.

In its rate-hike request, the company doesn’t offer any theories about what particular trends are driving the cost increases. But Roehrig recently co-wrote an article suggesting that medical costs are going up not because people are getting sicker, but because the cost per case continues to rise.

Hagen says he thinks his unique approach helps rein in health care costs overall. “The important thing for me, as a business owner, is the staff still had to pay the first $500,” Hagen says. “I always want the staff to see a physician or a care provider when they need it. But if you had somebody, and I don’t, but if you had somebody who was frivolously seeing the doctor, that’s their first $500.”