The Hub Tavern is a Spokane hotspot for NHL games, and a North Monroe gem all year 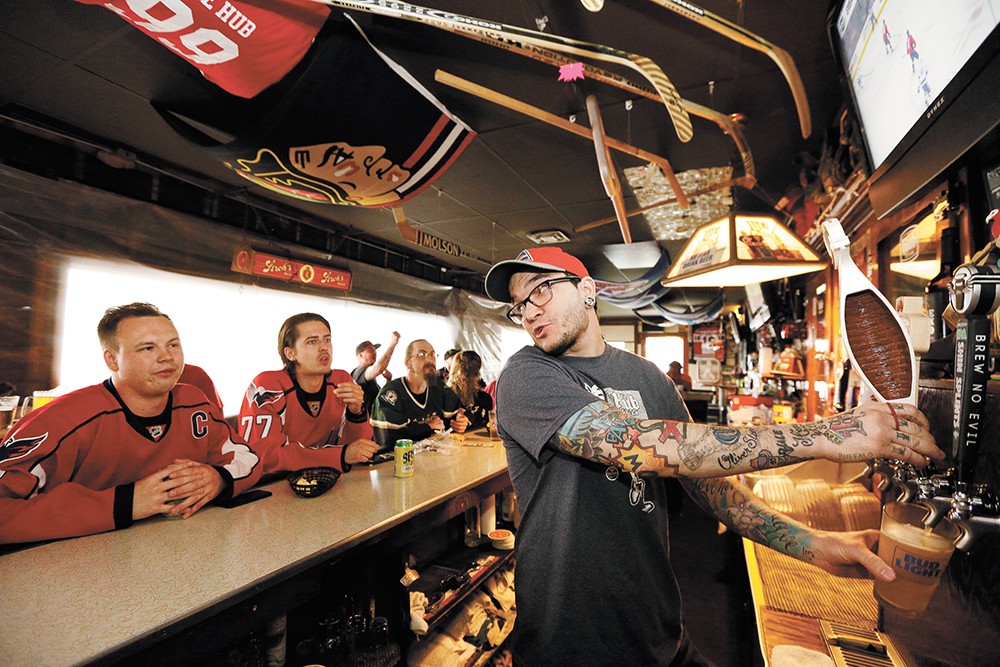 Catching a hockey game at the Hub Tavern on Monroe feels at one moment like a house party and the next like the rowdiest section at the arena.

Perhaps it's because bartender and part owner Buddy Richardson knows what all the regulars are having to drink, or the back-and-forth ribbings that they give each other. Maybe it's the Budweiser Red Light goal siren that Buddy's set up to go off any time a team scores a goal.

Owned by Buddy and his family — his wife Lea, his dad Dave and mom Mona — the Hub has been the Spokane hockey bar since the family bought the business in 2012.

"It's been fairly recent. When we took over we always loved hockey and figured, 'What the heck?'" Buddy says. "I told my parents, 'If I'm going to be here a lot, I'm going to buy the [hockey] package.'"

Sure enough, at any given time during the National Hockey League season, most, if not all, of the tavern's TVs are tuned into the night's games. The hockey-related décor has only grown the longer Buddy's been at the bar. His collection of programs and pucks was quickly joined by signed hockey sticks that hang from the ceiling, thanks to a former stickboy to the long defunct Spokane Flyers senior ice team.

The streetside wall is getting a facelift thanks to a car crashing into the bar last summer, but the expectation is to have even more of the gear that used to frame the tavern's large windows.

While most bars devote themselves to throwing as big a party as possible on New Year's Eve, the Hub goes all out on New Year's Day. Not for the calendar change, but for the Winter Classic, an NHL face-off played outdoors instead of in an arena. The bar puts a net on the patio and throws shootouts for prizes.

And the Hub doesn't half-ass the hockey experience, even down to their beer selection. There aren't many bars in Spokane or even the states that tap Labatt Blue, but you can get it here. And for a while Buddy was able to work out being the only bar in the area to have a reserve of the rare Canadian Molson kegs.

The vibe and beer has brought in an ever-growing group of regulars who come in to root for their team, or for hometown hero Tyler Johnson, who plays for the NHL's Tampa Bay Lightning.

"Everybody knows who No. 9 is," Buddy quips. "And it's cool to watch the local boy go on and do cool things." 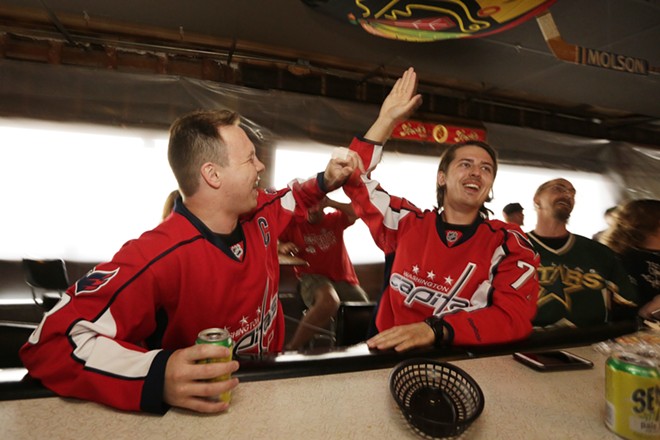 Greg Kvasov, left, and Tony Sizov celebrate a goal by the Washington Capitals during an NHL playoff game between the Capitals and the Tampa Bay Lightning, at the Hub Tavern.

"I grew up watching Detroit and switched allegiance when Ovechkin entered the league," Greg Kvasov says.

"We're Russian, so we picked the superstar Russian to follow," Tony Sizov adds. Both of them grew up playing hockey at Eagles ice arena and have found their way back to Spokane and at the Hub on hockey nights."I moved back here recently and it's now one of my favorite things about Spokane," Kvasov says. "Out in Seattle there was a hockey bar, but it's not as close-knit as it is here."

"This is community-based for sure," Sizov says. "Everybody kind of knows each other here and there's no hard feelings no matter who wins."

The sentiment is an understatement, as the Hub is as much of a neighborhood bar as you can get in Spokane. Most of the regulars work in the neighborhood or live a few blocks away. Buddy recalls that one of the guys that came to his son's birthday party was a transplant from Columbus, Ohio, that felt immediately at home when he first showed up to the bar.

That tight-knit feel has helped the family as the Monroe Street overhaul continues beyond hockey season.

"With the construction going on it's amazing how many new people come in and say 'Hey, we're here to support you guys and see you stay open,'" Buddy says. "It's really cool to see the neighborhood help out as much as they can."

And as the hockey bar grows, so does the Richardson family. Buddy's two young kids are already wearing skates and he and his wife are expecting another. He jokes with a couple regulars about the baby's June 12 due date, guessing it'll be a couple weeks earlier if he's learned anything from his last two trips to the maternity ward.

"Well, let's hope for June 12," chimes a woman in a Pittsburgh windbreaker, "That's when the Penguins won their last Stanley Cup."♦

The original print version of this article was headlined "Hockey Heaven"