The Kids Are More Than Alright

Now that they have a boat house to practice in, FAUS is pretty much perfect. 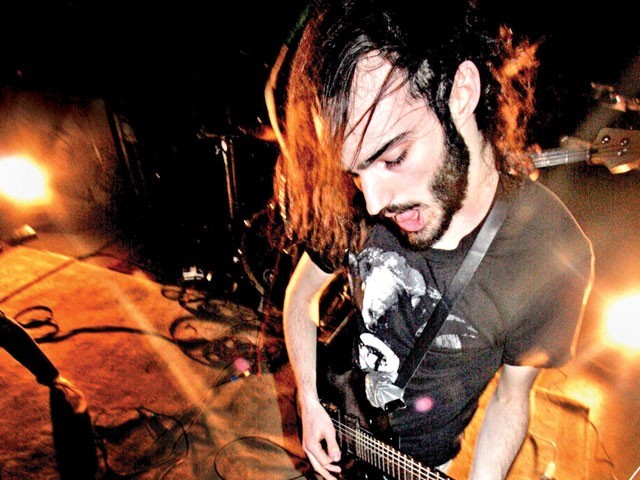 Go past Indian Trail, past the golf course. Don’t stop at Nine Mile Falls — keep going past that. Way past that. When you’ve passed a bunch of trees, a huge hill, part of a lake, some corn and a whole bunch of farms, you’re almost to FAUS’s practice space, a half-garage/half-boathouse on Long Lake.

It’s the local five-piece’s first practice here, and the space seems about right. As the band slogs through two new songs, a fat old dog runs by on the gravely road, unperturbed by the ritual slaying of guitars and amps and drums occurring nearby. Their brand of experimental hardcore gashes through the country quiet like a thunderclap, cracking the calm of crickets cricketing and birds twittering.

It’s almost as if no noise existed before FAUS moved to town.

No one seems to mind though. Not the neighbors, not the band. After losing three practice spots in a short period of time because they’re so damn loud, it’s a relief.

And it’s almost kind of fitting that they drive all the way here — over an hour in rush-hour traffic — to practice. Three of the five members of FAUS are from Colville (almost two hours north of Spokane), population 5,000. A town anchored by timber and mining.

A town very much not anchored by metal. Or hardcore. Or anything remotely like the music that FAUS is hammering into the trees and waves of Long Lake like they are now.

But here’s the thing: FAUS plays like this is what they were born to do. Like feedback and riffs run through them instead of blood and cells. You can’t learn to play like they are. You can’t rip it off. You either know how to play like this or you don’t. Colville, Freeman, New York City, Seattle, Tokyo or Spokane.

Kids (and I do mean kids: half of the band is under 21) like these are doing it right.

On the lawn by their practice garage, they giggle about their love for fast food. How they want to hit the road. Be road warriors. They make inside jokes. Talk about buttholes. Their friend (whose parents own the garage) farts a long, drawn-out rumbler. Someone has hocked a huge green loogie on the sidewalk, which I narrowly miss sitting in. Paul talks about finishing high school — yesterday. Today he’s sporting soccer shorts and cowboy boots. No shirt.

With the exception of Paul Patton, who sings in the band, none of the band’s members have taken music lessons.

“We’ve just heard a lot of other bands, we’ve played with a lot of bands and went to a lot of shows and a lot of bands sound alike. They’re like ‘chug-chug-squeal. And that sucks,” Ezra Christopher, drummer for the band, says. “We just try to be as creative as we can. We don’t like four-four time signatures at all. We just like to be creative and that’s what we’re going for.”

Most of them taught themselves to play — which meant they sucked for a long time, Mike Angelini, one of two guitarists for the band, says. “Our musical proficiency is up a bit from where it was.”

On stage at an April show, the band is quaking. It seems the last thing that Angelini is concerned with is his guitar — that’s just automatic. He’s jumping and thrashing and freaking out the entire set. Anthony Perez, the band’s other guitarist, is doing the same — all the while, both playing spot-on. Ezra’s is The Hulk behind the kit: technical, tight and fast. Ian Hancock, the bass player, is lanky and tall but keeps in time with his smaller counterparts. Paul’s cowboy boot is firmly planted on the rim of Ezra’s kick drum, his red curls shiver under the sheer volume of his screaming.

They’re the kind of band that every kid wishes they could be in. A once-in-a-lifetime mix of principle, youth and raw talent. They’re the kind of band you worry will get too cocky or too worried about the trends. One that still has time to get jaded by the road and the reviews and the girls and the attention. A band so full of potential, you worry they’ll be holding the ashes of greatness in their hands before they realize they’ve burned it all down.

They’re kids after all.