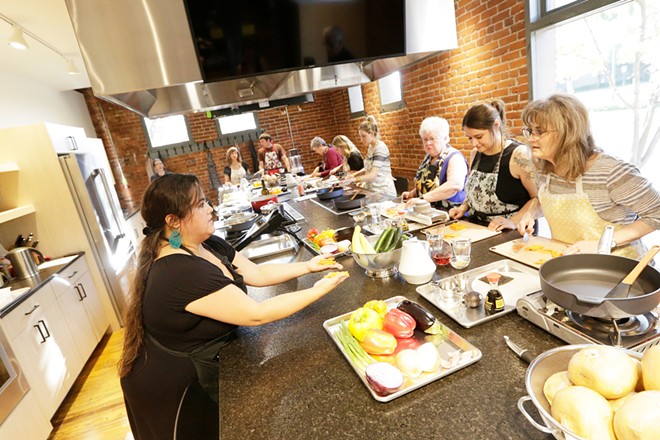 Chef and culinary instructor Jamie Aquino likes to share cooking insights, like how to cut carrots into perfect matchsticks or the foolproof way to soften delicate rice paper wrappers to make spring rolls.

To speed-ripen avocados, for example, place them in a paper bag with a ripe apple and ripe banana overnight, says Aquino, who's taught mostly vegetarian and vegan cooking classes at The Kitchen Engine culinary store in Spokane for the past 10 years.

However, Aquino draws the line at revealing her go-to place to buy bulk tofu.

"I'd tell all my students and then I go [where I told students to go] and there isn't any for me," she relays during the soft opening of the Kitchen Engine's new teaching facility. Pause. And then she tells attendees exactly where to find said tofu.

"I can't help it," says Aquino, laughing. "I'm not your typical cook."

For the soft opening, Aquino guides participants through a collection of recipes she calls "Wrap and Roll," involving lumpia-wrapped veggies and spring rolls — her son calls them "clear burritos," she says. Toward the end of the two-hour class, as everyone eats what they've made so far, Aquino prepares the final wrapped item: a chickpea flour crepe called socca stuffed with roasted vegetables.

Future classes at the Kitchen Engine are going to be a hybrid of participation and observation, Aquino says later.

"The plan when we got this new kitchen was we were going to go more hands-on," she says. "However, what we found is, a lot of our customers said, 'I want to sit and watch. I don't want to cook!'"

Prior classes were mostly limited to chef presentations, partially due to space restrictions. The old kitchen was tucked into a small corner of the Kitchen Engine's retail area, with room for maybe five students, all sharing cooktops, Aquino explains.

By comparison, the new teaching kitchen is cavernous, brightly lit and well-stocked. It measures 550 square feet, not including the prep and dishwashing area. The new space features a roughly 5-by-24-foot, counter-height island that comfortably accommodates a dozen participants, each with a dedicated cooktop. There are cubbies for whatever class materials might be used — all products are for sale in the retail area, of course — from brand new pans to pasta machines.

Overhead, two TV screens relay what the chef is doing, while a wireless microphone helps students know when to rough chop and when to chiffonade.

Aquino is overseeing the expanded program and hopes to double the number of regularly scheduled teaching chefs to 24. Inland Curry's Noreen Hiskey, for example, is sharing her vast knowledge of Indian cuisine in an upcoming class. Cooking classes are posted on the Kitchen Engine's website.

"I have a big vision for the future," Aquino says.

The plan is to host two classes per day, one in the afternoon and another in the evening, six days a week, says Eric Frickle, general manager of the business he co-founded with family 16 years ago.

The Kitchen Engine is located inside The Flour Mill, a 127-year-old building near Riverfront Park's revamped North Bank area that houses mostly retail stores and a few food venues. When two of Kitchen Engine's neighbors departed in 2020, Frickle and his business partners saw an opportunity.

"We had been drawing up different architecture designs and kind of playing around with the 'what-ifs,'" Frickle says, noting that the expansion grew the business footprint from 2,800 to 4,500 square feet.

Although they signed the new lease in spring 2020, the pandemic shutdown put the business on pause. When Kitchen Engine reopened, says Frickle, local support was awesome, especially in unexpected areas. Interest in baking items, for example, ballooned like yeasty bread.

"Apparently we can all eat carbs again, so that's nice," he says.

Over the past two years, the Kitchen Engine has chipped away at transforming its existing space. When Levitch Jewelry & Consignment moved to the Flour Mill's lower level, Kitchen Engine built a custom cutlery section in its former footprint.

"We've seen the demand [for knives] for a while," says Frickle, but "we just didn't have the square footage to do it."

In addition to its existing, low-cost knife sharpening service — $1 per knife, up to a limit of 10 — Kitchen Engine offers high-end knives in sets or individually, and some you can try before you buy.

"I'm probably losing money on [knife sharpening]," Frickle adds, but "it gets people excited about our shop and gets them in the door and, you know, potentially opens the door for them to say, 'You know what, I've had this knife sharpened many times, and it's just not cutting it anymore.'"

The 2020 departure of Chocolate Apothecary — which moved to Spokane Valley — paved the way for Kitchen Engine's new café on the other side of the new teaching kitchen.

"We've created this full immersive coffee experience," Frickle says. "So you could go try out one of the machines before you buy it, kind of taste the difference between what a $2,500 machine gets you versus a $500 machine."

In addition to coffee by DOMA, for example, patrons can snack on Rind and Wheat pastries and, when the weather cools, soup, wraps and other light bites.

"My goal with the food offerings in the cafe was going to be obviously something that went well with coffee," Frickle says. "But also just something quick for lunch that doesn't exist in the Flour Mill already so I'm not stepping on anybody's toes [but] giving people who walk in another option."

People walking into the Kitchen Engine can also do so from a new access point. In addition to entering the shop from inside the Flour Mill, patrons can enter via an exterior door facing the parking lot.

That, Frickle says, opens up even more possibilities, from outdoor cooking classes like barbecue to al fresco dining.

The new kitchen facility and the café are big changes for the Kitchen Engine, but the bulk of its business is still retail, which continues to face competition from e-commerce and powerhouses like Amazon.

Frickle is unfazed, listing the reasons Kitchen Engine is still a good choice.