When the German army destroyed the town hall of Péronne, France, in 1916, a handful of the Kaiser's troops erected a placard on its ruined walls bearing the phrase, "Nicht ärgern, nur wundern!" ("Don't be angry, just be amazed!") That phrase ran through my head as I watched the waves of indignation roiling around Idaho Lt. Gov. Janice McGeachin's recent Statehouse photo-op with members of the Three Percenters, a militia group involved with the 2014 Bundy ranch standoff in Nevada and Bundy-inspired armed takeover of the Malheur Wildlife Refuge in 2016. Here were people with little love for town halls standing shoulder-to-shoulder with the second-highest executive official in Idaho government. In the Capitol, no less.

The longer I looked at it, I went from "don't be angry, just be amazed" to "don't even be amazed." 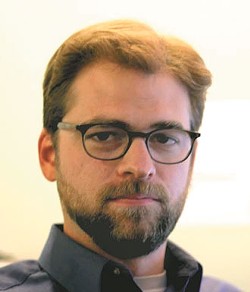 The offending image, which started making headlines on March 1, features two grim-faced men in orange prison-style jumpers flashing the "OK" hand signal with McGeachin smiling in the middle, her hands curled in the shape of a heart. The men were at the Idaho Statehouse to advocate for the release of Todd Engel, who is serving 14 years in prison for taking part in the Bundy ranch standoff, which drew anti-government activists and militia members from across the country in an armed confrontation with federal law enforcement officers. McGeachin, on her now-deleted Facebook post accompanying the photo, wrote, "Sending love to Todd Engel from the Idaho Capitol."

Condemnation for the recently elected lieutenant governor focused on allegations of racism that many saw implied by the hand signals displayed by the unidentified, jump-suited men. There is a rich corpus of online speculation about the significance of the "OK" symbol, with some arguing it represents "white power" in a not-so-subtle dog whistle meant to signal support for other white supremacists. In the context of the McGeachin photo, others argue the gesture with its three outstretched fingers represents the Three Percenters, whose name refers to the supposed 3 percent of colonists who actively resisted the British during the Revolutionary War. (Historians have frequently debunked this myth, pointing out that the 3 percent figure, amounting to about 80,000 people, is based on post-war pension lists, some of which were compiled in the early 1800s. The more accurate figure is 100,000 serving in the Continental Army and another 100,000 in the various colonial militias. A more interesting number, however, is the 20,000 enslaved black soldiers who joined the British army to fight against their patriot masters, making the Revolution the biggest slave rebellion in our history.)

All that said, I'm not going to wring my hands over these guys' hands, other than to point out that if their gesture wasn't racist, then it was stupid. What I find particularly noxious about this whole situation is that it illustrates how deeply anti-government, militia-inspired kooks have penetrated mainstream Idaho politics. It's ironic that Gov. Brad Little is a gentleman-rancher-style politician, more in tune with ag industry boardrooms than the Bundy barricades. It's hard to imagine a similar scene playing out in the Capitol when he was lieutenant governor.

But anyone who's watched McGeachin over the past few years knows how ready she is to legitimize the menagerie of weirdos who think they live in some place called the American Redoubt — a fever dream of transplanted nationalist burn-outs and millenarian John Birchers. Look no further than her own campaign website for a torturous hour-long video interview with the so-called Redoubt "News" (look for the Aer Lingus poster in the background — isn't that literally white flight?) and a picture of her grinning alongside Ammon Bundy at a gun rally in Boise last summer. "His words were truly inspiring," she wrote.

Again, don't be amazed. This has been the trajectory of Idaho politics since at least 2008: From "Esto Perpetua" to "I ♥ Militias." ♦

The original print version of this article was headlined "I ♥ Militias"