The Ladies of Horror

The Scream Sirens celebrate blood, guts and pin-ups with their online magazine for women. 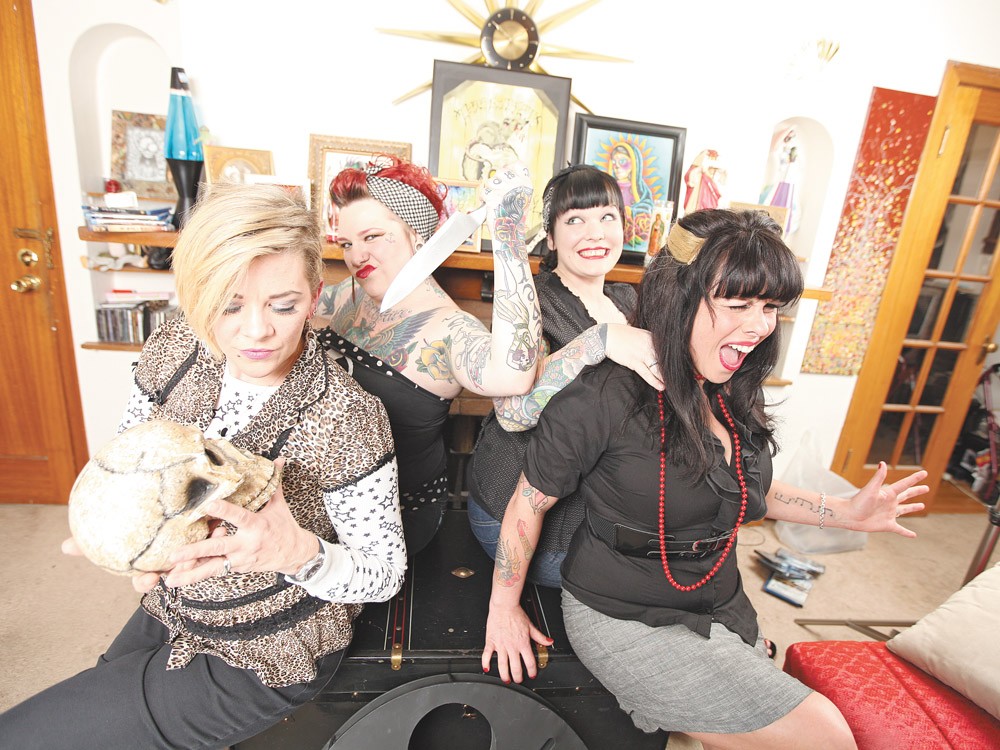 There’s a mason jar filled with fake blood on the red brick mantel. A combination of water, flour, Karo syrup and red and blue food coloring gives it the color and consistency of coagulated blood.

Next to the jar sits a bleeding, headless statue of Jesus and a painting of a zombie Virgin Mary. Combined with the creepy one-armed baby doll in the corner, it’s quite the unholy trinity.

But the little shop of horrors is befitting of the event. Tonight the Scream Sirens — Chandra Vitellaro, Joselle Stumph, Jen Adkins-Grossman and Stephanie Goldsmith — are huddled around candles and empty cans of Miller Lite to discuss Rob Zombie’s film House of 1000 Corpses, the fact that Janet Leigh’s body double from the shower scene in Psycho was, ironically, stabbed to death, and “Betty bangs,” the iconic hairstyle worn by fetish pinup Bettie Page.

This isn’t your average knitting circle. Together, the group of Spokane women has created Screamsirens.com, an online magazine and forum for women who love the subculture of horror. It’s a girly, sparkly-pink playground for the beautiful, grisly and the grotesque.

Vitellaro says the idea for the website was inspired by Horror Hound and Fangoria magazines, shocktillyoudrop. com, bloody-disgusting.com, and horror conventions like Monsterpalooza in California and Crypticon in Seattle.

“I wanted to create a website, because there is nothing targeted for women that love horror and things that deal with the subculture, like fashion, pin-ups, art, tattoos and music,” Vitellaro says.

“Women who, because of the way we look, or the things we like, might not get looked at or treated like I think we should,” says Goldsmith.

Stumph agrees. “We want women to know that they’re not the only one living in a normal everyday world but this is the weird and freaky shit that they’re into.”

The website was launched in February. Its creators are real-estate agents, mothers, hairdressers and opticians, but online they’ve created alter egos. “The Siren” channels Bettie Page with Tina Turner’s legs. “Gina Slutcake” has the mouth of a tawdry sailor. “Jen-of-Fire” is a karaoke rock-star goddess. And “Scissor Kitty” is an aspiring ninja.

They share a common passion for monsters and murder.

“Without imagination, there would be no horror,” says Grossman, paraphrasing Sir Arthur Conan Doyle.

“There are a lot of messages that get overlooked in the genre,” Vitellaro says. “It’s about creative expression, pushing buttons and unearthing underlying psychological and social issues.”

Vitellaro mentions an article she read about “women and men and gender and chainsaws” when Stumph interrupts her.

“It’s kind of a stereotype and myth that horror movies are degrading toward women,” she says. “The woman always lives and, in the end, she usually turns around and kicks ass.”

Stumph provides cocktail recipes, slasherbook reviews and “The Horrific Truth,” an advice column/rant where she’ll discuss just about anything — including the debate between slow or fast zombies.

Grossman contributes trailers and book and film reviews from films like Troll Hunter and The Woman and online horror series on fearnet.com. Goldsmith provides beauty tips and tutorials — like how to do a beehive, or how to curl your hair with cans of Pabst Blue Ribbon.

The women celebrated their 100th fan on Facebook by popping bottles of champagne on Stumph’s porch.

“It was insane and scary,” she says. “People actually liked us, and it was only within the first week.”

Now, they count their Facebook fans by the thousand.

Vitellaro estimates that she has spent $5,000 investing in merchandise and the website. She hopes the payoff will ultimately be worth it.

“There’s just so much we could be doing it makes my head hurt,” she says. “Right now we are trying to harness everything, look at traffic and reactions and get the content up there. We have a huge interactive audience that is waiting, looking and responding to us.”

Expanding the website — the company, the lifestyle, the subculture — is a constant topic of discussion.

“We want Scream Sirens to be a household name,” Stumph says.