We managed to get our hands on the diary of Mike Leach, head football coach at WSU 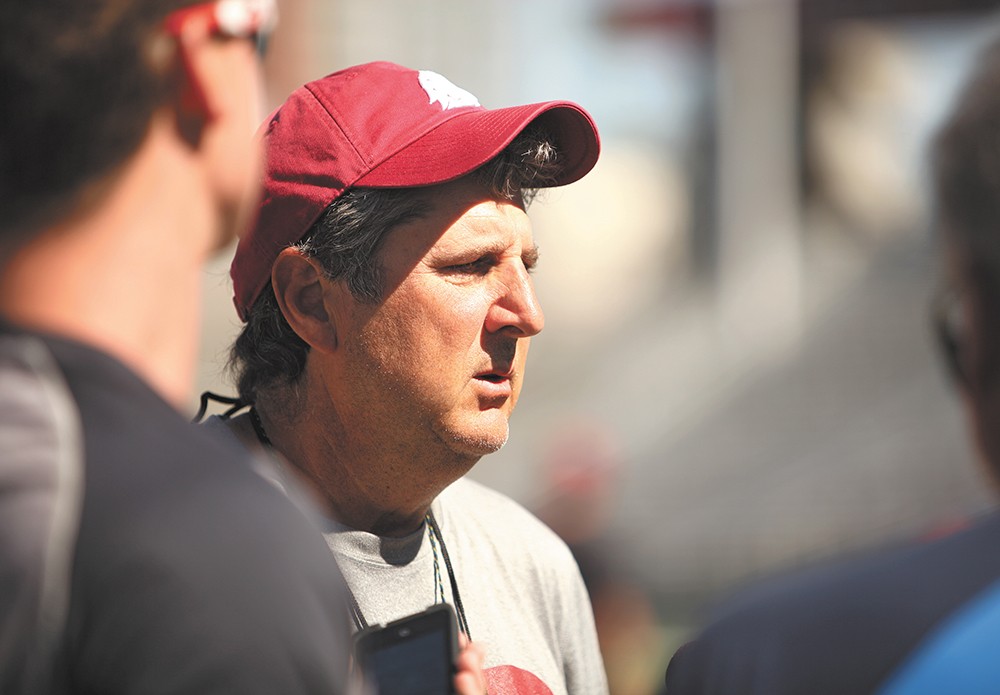 Young Kwak
Leach knew that taking over at WSU wouldn't be easy.

We take on Cal tomorrow at home. I told the kids to be ready for a fight and to come out swinging their swords and all the usual pirate stuff. You know, just classic Mike Leach. I have to admit, though, I was a little distracted. Turns out that philosophical treatise about the dangers of technology I spouted at Monday's press conference has gone, as the kids say, "viral." The people are beginning to listen!

Oh dear diary, I fear our mighty ship has gone down once again, this time by way of a field goal calamity even Zeus himself could not have predicted. Connor Halliday's golden arm threw for more yards than any other arm in the long history of this beloved sport of kings. I thought writing this with old-timey flair would help my spirit, but it has not. Now for a long meditative walk through my garbanzo bean field.

If I hear the phrase "Couged it" one more time...

Just fired the special teams coach. I had to do something. Right, diary? I mean, we gave up two touchdowns on kick returns and that missed field goal... I can't even think about it. Did I do the right thing, my dear spiral-bound friend? You know where I'm coming from, right? Who knew this job was going to be so tough? The Pac-12 has gone and gotten itself really damn good, and we're trying to bring kids here over places like UCLA and Washington, which are located in cities with freeways and rock and roll concerts and other things that tempt the youth of America. Oh diary, Lady Fortune can be a mean old bird sometimes.

My spirits have rebounded from last night. This morning I even called Stanford head coach David Shaw and told him we're going to run the ball a ton against him on Friday. We're actually going to pass more than ever! I think he bought it. It's these sort of mind games that could take me to the next level of coaching.

I think I finally cracked the secret to time travel!

At today's film session, I lectured the team on the Peloponnesian War and how it relates to today's situation in Ukraine and this, naturally, led us to pirates and my bestselling book on Geronimo, which was available for sale at a special friends-only discount price. We didn't get a chance to talk about improving our pass defense, but as a coach, you must have priorities. After that, I gave a guest lecture in a doctoral-level physics class and still had enough time to hit the library to take in some Proust. Sometimes you have to have some fun in this business, you know what I mean?

Today we flew to Palo Alto in advance of tomorrow's battle against Stanford. The captain said we were flying at 35,000 feet, but my calculations had us at only 33,400 feet. I drafted a letter to the FAA. Also, the flight didn't offer peanuts; this complaint was levied in a separate letter addressed to an agency to be determined at a later date.

Drew a super cool spaceship on my dinner napkin tonight and now I can't find it. That's unfortunate, as it was better than those other spaceships I've been drawing all week. It had a force field and, like, five rocket boosters.

It's game day again. Didn't sleep much last night. I watched film of Stanford's formidable defense into the wee hours, and I think I might have found some ways to get by them. The plan involves throwing the ball more than EVER. I think Halliday is going to throw for 800 or more yards tonight. Feeling good about this game.

Why in the hell are we playing on a Friday night again? I think ESPN is trying to get back at me. Something doesn't smell right about this.

Sitting on the plane as I write. We are returning to the Palouse with a 34-17 loss the only souvenir of another long road trip. The losses are mounting, dear diary, and my men can sense the season slipping away from them. There's only one thing we can do — keep passing the ball. For it is through five-step drops and timing routes that a man finds truth. If that doesn't work, we need to get to work on that time travel plan and find a way to fix this season.