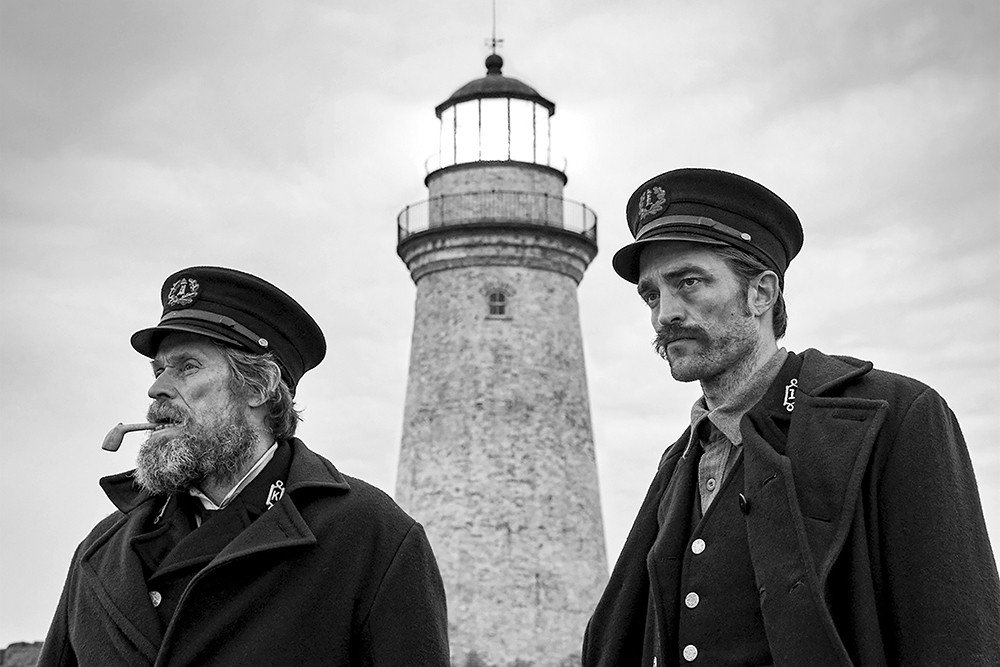 You'd be forgiven for thinking The Lighthouse is a comedy when the first two things that happen are Robert Pattinson bumping his head and swearing and Willem Dafoe farting. But while those and a handful of other humorous moments and outlandish events do make this a nutty affair, the sophomore effort from The Witch writer-director Robert Eggers is deadly serious in its basic intentions: to rattle us with slow-burning madness.

This fabulous, unnerving sea chantey is set in the 1890s or thereabouts, with Pattinson and Dafoe confined to the title place and the small, remote New England island on which it sits. Their isolation is so absolute that they don't even bother to learn each other's names at first, but Thomas Wake (Dafoe) is the senior lighthouse keeper who's been here seemingly forever and Ephraim Winslow (Pattinson) is his new assistant, a lumberman looking for a new line of work (wonder why?) and who was sent for a monthlong gig as a replacement for Thomas' last partner, who went crazy.

Thomas is demanding of his new underling and won't let him actually keep the light or write in the logbook (which he has under lock and key). Ephraim does the menial chores during the day while Thomas sleeps, having been up all night at the lamp. And sure enough, with all the odd sights and sounds on the island, not to mention the solitude and boredom and celibacy, Ephraim starts to go a little stir-crazy, nearing the level of nuttiness that Thomas has already achieved. (Do not underestimate the maddening power of forced celibacy.)

I believe Thomas is what you'd call an "old salt," speaking in a pirate dialect ("What brung ye to this dam-ned rock?") in a voice remarkably similar to that of the Sea Captain on The Simpsons. Like all good seamen, he's inflexibly superstitious, with haunted eyes that suggest he has seen (or at least thought he saw) some dreadful things. That he doesn't come across as a parody is a testament to Dafoe's talent for finding the reality in even the weirdest of characters. Ephraim is less overtly daft but still puzzling, and Pattinson, bless his soul, commits fully to his enigmatic and eventually shocking behavior. A lesser actor would be completely lost working one-on-one with Willem Dafoe, but Pattinson holds his own.

Eggers, who co-wrote the screenplay with his brother Max, shot the film in a square aspect ratio that reinforces the claustrophobic situation. That's what the head bonk and the farts were all about: to establish that these are cramped quarters in which no one fits comfortably (and, yes, to signal that there will be things to laugh at as well as recoil in horror from). It's in black and white, too, and Eggers' carefully composed shots are full of marvelous German Expressionist shadows that underscore the eeriness. It's a terrific looking movie, and a counter to those who think black and white is always flat and drab. I'd estimate the film would have been 25 percent less effective in color.

Things come to a boil when Ephraim's replacement doesn't arrive and Ephraim and Thomas start spending all their time drinking, talking and yelling. Confessions are made — or in Thomas' parlance, beans are spilled — backstories are revealed, and our two "wickies" become a bickering, drunken old married couple. The Lighthouse is as creeping and methodical as The Witch was, and its climax prompts similar thoughts of "this is bonkers," but the oddness is more bemusing than terrifying — enjoyably weird rather than soul-shakingly bizarre. ♦

The Lighthouse is not showing in any theaters in the area.

It's been a long, long time since we've had a musical biopic as good as the Elton John film Rocketman