How a Spokane teen girl can plummet into meth addiction 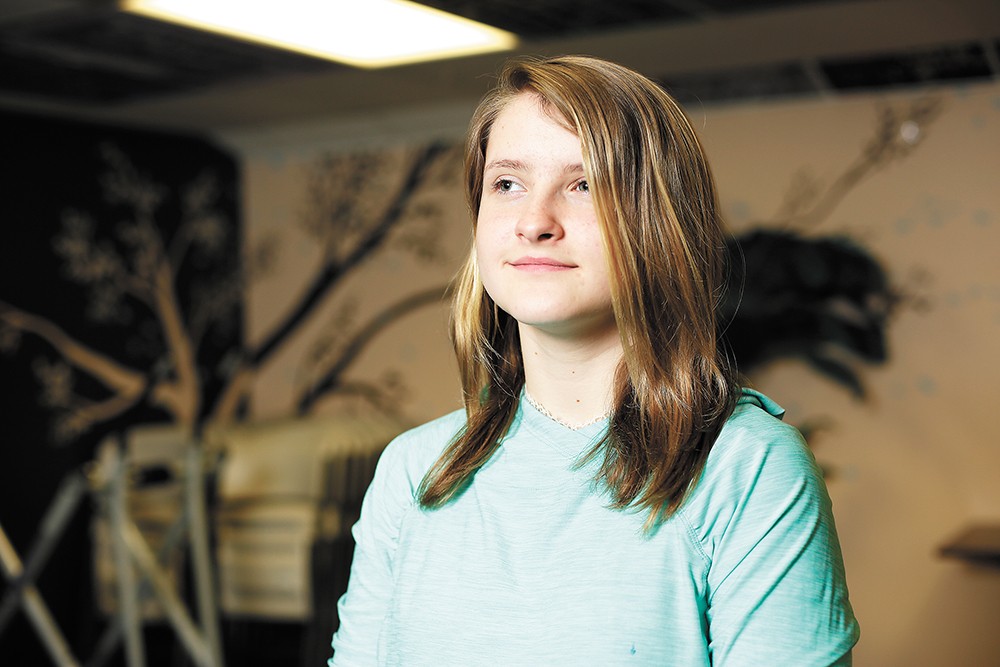 When Alexis Bledsoe entered her freshman year at East Valley High School, her future looked just as bright as any other 15-year-old's. She was a star violin player. An excellent soccer player. A good student.

Few people could have guessed how her life would turn.

That year, her grandparents John and Marilyn Bledsoe, who raised her, noticed her attitude changing. She skipped class and hung out with different friends. Eventually, she started running away from home, spending time with older men and not coming home for days. Her grandparents called the police and, when they found out she was using drugs, they would send her to outpatient drug treatment. Still, she'd run away at night.

"Lexi," as she's known, was lost to addiction. In less than two years, the girl who once loved fishing with her grandpa transformed into a girl who crushed and snorted meth in the back of the classroom behind her binder.

It's a story that families hear all too often, but one that flies under the radar. Teens, more often those who have experienced family trauma in childhood, turn toward drugs and alcohol, either through peer pressure or to cope with pain. And girls at Daybreak Youth Services, the largest inpatient drug-treatment provider for teens in Washington state, are more likely to progress to using meth than boys are. Typically, says Daybreak CEO Annette Klinefelter, it's a boy or older man who lead girls down the wrong path toward a life on the streets plagued by addiction and abuse and trauma.

"Families are more likely to lose girls," Klinefelter says. "They lose them to that relationship."

Yet for Lexi, the influence of one positive role model can lead her the other way.

Lexi's battle with addiction, in a way, started before she was born. Her mother used drugs and alcohol, and Lexi was born with fetal alcohol syndrome.

She was taken from her parents before she celebrated her first birthday. Her parents, both using drugs at the time, split up shortly after, and Lexi's grandparents raised her and her two brothers. They took custody of her when Lexi was 4. She attended Otis Elementary and Trentwood Elementary. She had everything she could ever ask for, she says.

"I had a wonderful childhood," Lexi, now 17, tells the Inlander.

In the sixth grade, she visited the Arlington National Cemetery in Virginia and saw the Changing of the Guards ritual. She was "in awe," she says. It confirmed what she had known for a while: She wanted to be a police officer.

But she was told she could never fulfill her childhood dream to become a cop when she was 14, before she entered high school. Someone told her they don't let people with Attention Deficit Hyperactivity Disorder carry a gun, and she believed them. She cried when she was told. Around the same time, her grandparents got a divorce, she had to say goodbye to one of her dogs, and she moved from her childhood home.

"That was devastating for her," John Bledsoe says.

At school, she felt bullied. She started cutting herself. She started smoking weed at the age of 15. She says she thought it was cool because her older brother did it. Soon, however, she found herself dependent on it.

"I think that's what started the addiction to marijuana — I was trying to cover up my pain that I was feeling," she says.

She says she first started smoking meth at 16, influenced by an older guy she met. Her group of friends changed. She no longer hung out with people in her high school, but with people "who were always really high on dope, people who I didn't even really know."

She skipped class more and more often. When she was at school, she only thought about getting high.

"I would sit in the back of the class and I would feel myself coming down," she says. "So I just put my binder up — everyone was taking a test — I'd duck underneath my binder, crush up my rocks and snort a line of meth."

Later that year, she dropped out of East Valley High School. She lived with her grandmother after the divorce, but she'd sneak out at night and not come back for days. Her grandparents would look for her and then call police after 24 hours. Sometimes she would steal her grandmother's car. She went to juvenile detention over and over. She was sexually abused by the people she got drugs from, her grandfather says, and Lexi says at least one person overdosed in front of her. Her grandparents tried putting her in Daybreak Youth Services outpatient treatment for her drug addiction, but she'd leave the counseling session, go home and smoke again.

In April of this year, she stayed in juvenile detention for 33 days for stealing her grandmother's car. When she got out, she went right back to meth.

"It was rapid decline. It was just more weed, more meth on the daily," she says.

Her grandmother moved to Yakima, so in September she moved in with her grandfather around the time she turned 17. In November, she found herself in juvenile detention again.

Sitting in jail, she couldn't wait to get out and go smoke again, she says. But then she was visited by a Spokane Police Department officer, Ben Green. A probation officer recommended Green visit her, thinking Lexi could use a mentor. But Lexi, at first, didn't want anything to do with him, Green recalls.

But then Green told her something that changed everything.

"I told her that if she stopped all of it, she could be a cop," Green says.

For nearly a month, Lexi has been in drug treatment at Daybreak Youth Services. She could have gone back to the streets after her stint in juvenile detention, but her outlook changed after speaking with Green.

"A switch had turned on," she says. "I finally had a goal and knew how to work towards it."

Daybreak Youth Services treats boys and girls for drug addiction in Vancouver, Washington, and in Spokane, but the Spokane residential treatment facility is for girls only. Klinefelter, Daybreak CEO, says it's common for girls to come in with more severe drug addiction to multiple substances than boys.

Daybreak's data backs that up. Most kids come in with marijuana or alcohol-abuse problems, but an Inlander analysis of Daybreak's admission data from June 2016 until September 2017 shows that girls are more likely to pair that with addiction to meth.

She adds that the girls who are influenced by older men often will run away from home, or live with them on the streets. It often puts them in danger of sexual abuse.

"What we have found is because girls fly under the radar with their drug use for a much more extensive period of time, it allows for more progression," Klinefelter says. "They tend to internalize. And so their drug and alcohol use tends to be in bedrooms, typically with older boys."

It's unclear if Daybreak's data on girls being more likely to abuse multiple substances extends to other treatment centers. At Excelsior Youth Center, which treats teens for drug addiction and behavioral problems, all the inpatient kids treated for drug addiction are male, and 56 percent presented abuse of at least four drugs.

Andrew Hill, CEO of Excelsior Youth Center, says it can be difficult to recognize warning signs for girls, who can seek outpatient treatment at Excelsior. Some teens "internalize" stress (becoming more withdrawn at home and school, harming themselves) and others "externalize" it (things like fighting, stealing or vandalism).

"It is plausible that a female may have more intense issues because it's gone unnoticed, and generally our society would respond to externalizing behaviors with criminal charges or involvement with the legal system," Hill says. "If you have a youth internalizing behavior and poor grades or apathy about school, we as a society or as a family would not necessarily associate that with potential substance use."

Excelsior identifies those behaviors and then uses targeted therapy to treat the underlying stressors and trauma.

What's also important, however, is family reunification and positive relationships with adults.

Roxanne Vandermause, now at the University of Missouri, is a former Washington State University professor who has researched drug addiction among girls in the Pacific Northwest. She's found how important mentorship can be for treating teenage girls.

"In my research, the thing that's been most significant is that girls are relational, and they tend to go along with the people most important to them," Vandermause says.

That's not necessarily different from boys, she says. But it's not uncommon for a girl's addiction to progress from weed and alcohol to meth and heroin under the influence of a boy or older man.

That's what makes a positive mentor so helpful. And just as crucially, for a chance to beat their addiction, Vandermause says girls need to have a vision for where they want to go in life.

"It matters to focus on the positive aspects of the future for girls and to give girls a sense of identity in service, a purpose in the world," she says.

Detective Ben Green knows the difference a positive mentor can make. He visits juvenile detention a couple of times a month, part of the Spokane Police Department's youth outreach. But sometimes Green visits on his own time, trying to steer the kids in the right direction.

It's a chance for the youth to see a different side of the police. And it gives kids an authority figure who will listen to them.

"We run into so many kids, and we have dozens and dozens of officers interacting with youth every week," Green says. "[Lexi's] personality and mine, we got along well."

He told her he promised he would walk her through the process of becoming a cop, as long as she went through with her rehab.

"I think she can do it," Green says. "It's a classic example of someone who got pointed in the wrong direction by one set of adults and she needed that input to put her on the right track."

Lexi, as of this writing, remains in Daybreak inpatient treatment. Living around girls and Daybreak staff — many who have gone through similar struggles with drug addiction — makes her optimistic that she can beat it. She wants to stay longer than the 30 days she was scheduled. When she gets out, she'll live with her grandpa and start working towards her GED before she can try and become a police officer. She's told her friends and her family that she's going to do what it takes to become a police officer whether they like it or not.

Yet even with the help of adults around her, she knows it's up to her.