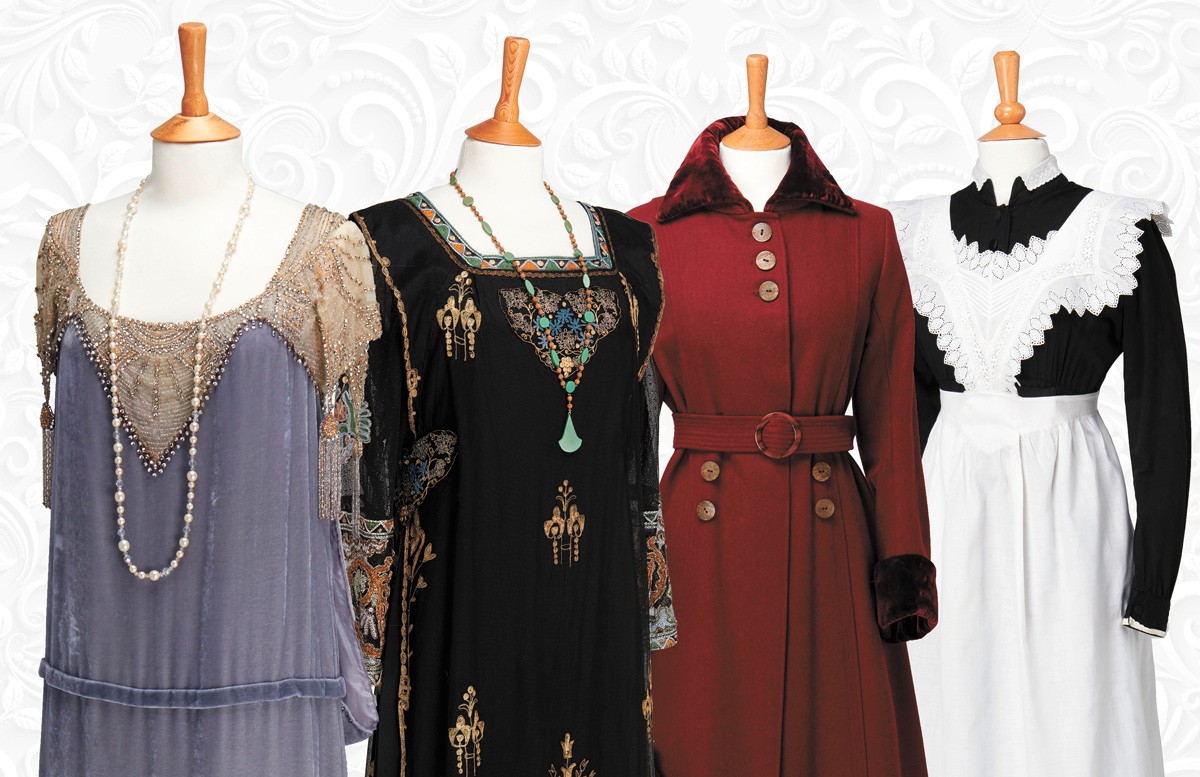 Clothes featured on Downton Abbey star in a show at the MAC.

While it's not unusual in this work-from-home era to roll out of bed in the sweatpants and T-shirt you'll wear the rest of the day, protocol was certainly much different 100 years ago, especially for members of the British aristocracy.

As fans know of the acclaimed PBS/BBC historical drama Downton Abbey, set from 1912 to 1925, the Lord and Ladies Grantham often went through more than a few wardrobe changes each day.

A dressing gown worn over sleepwear during breakfast in bed would switch out for a stylish day dress. If outdoor recreation like horseback riding was on the afternoon agenda, sturdier attire was required. For dinner, men's formal waistcoats and sparkling beaded dresses worn by the ladies would close out the day.

Reproductions of luxurious early 20th century garments are centerpieces of Dressing the Abbey: The Iconic Wardrobe of Downton Abbey, a traveling exhibit of costumes from the six-season series on display at the Northwest Museum of Arts and Culture, or the MAC.

Among the 38 costumes from the show are also outfits worn by actors who played household staff of the titular Downton Abbey, the Crawley family estate.

For those unfamiliar with the show, a quick breakdown: The Golden Globe and Emmy-winning series centers on the fictional Crawley family who reside on a pastoral Yorkshire estate. Robert, the earl of Grantham, is married to American heiress Cora. The show starts as the couple's three daughters — Mary, Edith and Sybil — begin seeking suitable husbands.

Aside from showing the day-to-day drama and elegance of aristocratic life, Downton spends equal time exploring the duties and aspirations of the estate's staff, from stern butler Mr. Carson to exasperated cook Mrs. Patmore. The series' aired from 2010 to 2015, followed by a 2019 feature film epilogue.

While most of the costumes in Dressing the Abbey are custom pieces worn by its female cast — exquisitely detailed and lavishly adorned garments emblematic of 1920s fashion — there also are a few uniforms of its kitchen staff, butlers and ladies' maids.

Dressing The Abbey runs through May 2.

If the pandemic hadn't upended exhibit schedules for museums beginning last spring, the MAC may not have brought this collection of Downton costumes to Spokane.

Museum staff had about three months to prepare for the last-minute booking, Exhibitions Manager Brooke Wagner says. Because of the far future-looking timeline of most exhibits, she says staff usually have a year or more to anticipate what's coming. And with any touring show the MAC hosts, its curators seek to incorporate regional connections.

"We always try to bring a little bit of our story into anything," Wagner says. "If you take the Pompeii show, we tied it to the Campbell family going to visit Pompeii on their grand tour. This show lent itself very well to added touches, rather than just being a room full of costumes, because that's really all it was — text and costumes."

Dressing the Abbey's lender, which also provided last summer's Pompeii exhibit, likewise encourages hosting museums to give it their own spin.

"Since we already have our own story from the same period going on in the Campbell House, that's when Wes [Jessup, museum executive director] and I decided maybe instead we take it from the point of view where we build these sets around it," Wagner says. "That's when we decided to partner with Spokane Civic Theatre."

Wagner worked with Spokane Civic Theatre Creative Director Jake Schaefer to create a series of mini "sets," like a 16-foot-long formally set dinner table with costumed mannequins in evening attire placed around it.

While some pieces in this vignette are on loan from local antique collectors, or from the theater's prop inventory, others were pulled from the MAC's archives. Two such pieces are a pair of ornately carved wooden chairs that were separately owned by Louis Davenport and famed architect Kirtland Cutter.

Another of the more elaborate scenes complements an olive tweed suit worn by Hugh Bonneville as Lord Grantham. Envisioned as a study or library, the display features a large globe (also from the Davenport estate), framed oil paintings and antique furniture from the museum's collections.

"This is a different way for us to consider using the collection in terms of atmosphere building," explains Freya Liggett, curator of history. "It's usually not the reason we bring things out; usually it's story-based, and here we were building more of an environment."

"Each has a tone, and we tried to glue together Downton and the assets of the costumes and the history of the Campbell House through a bit of a narrative," Schaefer says.

Several scenes are placed in front of historical photo backdrops of the Campbell House from the same period as the series' setting.

For one of these, Schaefer says, "We dressed it as though they were hanging out in Helen Campbell's room. That was the angle and side story in my mind. Is it in real life perfectly translatable — absolutely not, but the idea totally came from the Campbell House."

While most of the costumes were created specifically for the series, its Emmy-winning costume designers based pieces off of authentic 1920s patterns and styles. When appropriate, they also used original fabrics or embellishments. A long, flowy jacket worn over one of Lady Cora's dresses, for example, was made from a repurposed, embroidered tablecloth from the era.

"I think this show might be a way visitors can understand a little bit better of what museums do on the inside," Liggett reflects. "If you look at one of these costumes and remember the episode and the situation, that is an example of that item holding a story... That's what we do by holding onto the stories that go with the objects we care for." ♦

SPINNING A YARN AT THE CAMPBELL HOUSE

In connection to Dressing the Abbey, the MAC is also showcasing some of its own historical garments tied to the Campbell family and other early residents of the region in a separate exhibition inside the Campbell House.

Curator of History Freya Liggett says the early 20th century timelines of Downton Abbey and when the Campbells resided in their opulent mansion, along with the upper-class privilege each family experienced, are complementary.

"This was an opportunity for us to tell stories within the same time period and the same kind of social world," she says. "These aren't all folks who had a direct link to the Campbell family, but they would have had some things in common, and it's a chance for us to delve into some stories that might not otherwise come out in using some of these pieces."

Among the 10 pieces of historic clothing on display throughout the house are a preacher's bearskin coat and a young lady's fur opera cape.

Spinning a Yarn is on display through June 20.

The original print version of this article was headlined "Downton Duds"