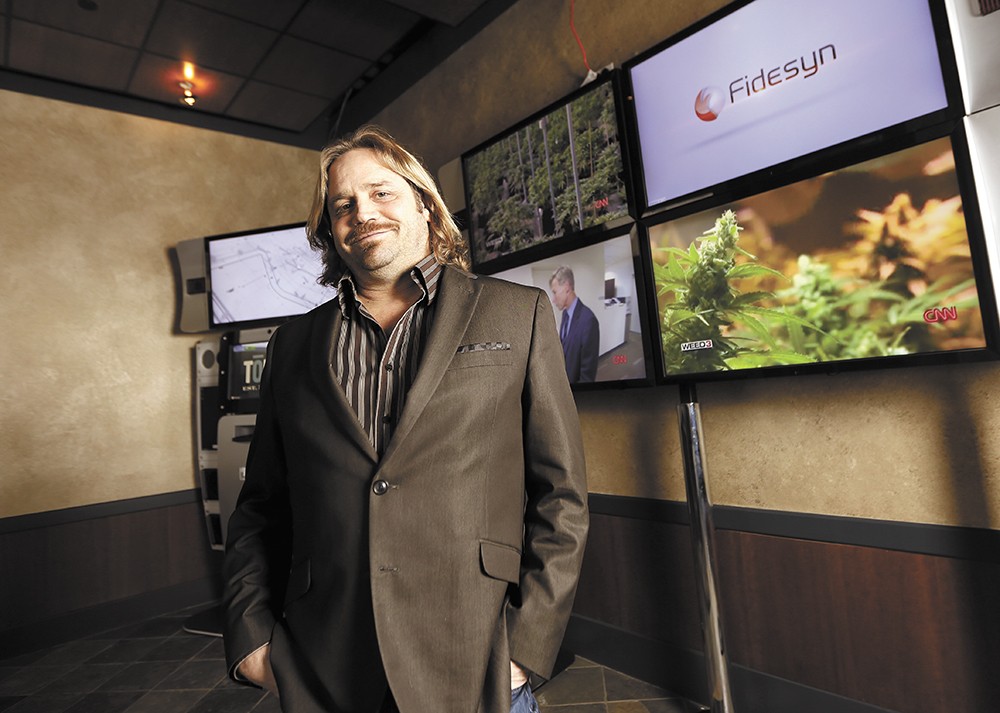 Young Kwak
"The guys that know me trust me," says EVR CEO Brian Main, who's been dogged by his past associations with fraudulent businessmen.

— with his long, dirty-blonde hair, his suit jacket, gold pocket square and cowboy boots — is back. He's lived in Italy and New York, but now he's returned to Spokane. He's in the downtown Spokane office of a new business — he's CEO of EVR, a company in the fledgling cannabidiol supplement industry, producing products from a non-psychoactive chemical found in marijuana.

These downtown offices are swanky, with the dark-blue-trimmed hallways and the hardwood floors left by the previous tenant, the infamous Blu-ray manufacturer BlueStar Digital Technologies.

By the end of 2014, after a seven-year saga involving broken promises, wild exaggerations, lavish spending, Hollywood producers, Michael Jackson's dad, bedbug-ridden apartments and a bikini contest in the Bahamas, BlueStar CEO Erick Hansen had been indicted on 16 counts of fraud. Hansen's trial hasn't started, but his former executive vice president of global business development has already pleaded guilty to fraud.

Main knows all of this. The FBI has interviewed him about it. According to a 2009 BlueStar press release, he was BlueStar's "Executive Vice President of European Markets."

It wasn't the first time the FBI came asking about one of Main's former associates: He'd also partnered with Greg Jeffreys, the Ridpath real estate developer who pleaded guilty to four counts of fraud and contempt of court in 2013. Main notes that the FBI has never come after him, and that many of Jeffreys' victims testify to his innocence.

Yet as Main embarks on this new venture, he's faced with the challenge of dissuading those who see guilt by association.

"If you hang out with a guy who turns out to be a child molester, does that make you a child molester?" Main says. "I never broke trust with anybody, not one person. But I can be damaged by scandal and innuendo."

It's been more than six years since the Ridpath Hotel took its last reservation. The long-vacant historic property remains locked in a tug of war between two groups: one that wants to resurrect it as an hotel and entertainment center; the other, led by developer Ron Wells, that plans to turn it into an apartment complex.

Much of the chaos plaguing the Ridpath has been laid at the feet of Jeffreys, the developer who helped divide up the property and sell off pieces at vastly inflated prices. Main was instrumental to Jeffreys' Ridpath schemes; he introduced Jeffreys to buyers and facilitated many of the transactions. He'd been involved with Jeffreys in several other deals that turned out to be rotten as well.

The lawyers and federal investigators looking to take down Jeffreys had to figure out if Main was a co-conspirator, or simply a patsy, another victim of Jeffreys' clever schemes.

"Originally we were concerned about Main's role in these," says Marshall Casey, a local attorney who represented victims of the Ridpath mess. "But when we looked deeper, he seemed to have relied on experts just like everyone else."

Casey went after the experts who Jeffreys used to pump up his valuation, including local attorneys and appraisers. But at his clients' insistence, Casey dropped Main from the lawsuit.

In fact, one of Jeffreys' victims — a guy who says he lost six figures in the Ridpath deal — is one of Main's most voracious defenders.

"He's always operated with very high integrity," says real estate developer John Mast, who has known Main since 1991. "If Brian brought a deal to me today, I would look at it and consider doing the deal, knowing it's my responsibility to do my own due diligence."

When the Ridpath deal turned out to be a disaster, exacerbated by the housing crisis, Main lost a bunch of money too, Mast says. He points to the hundreds of successful deals Main has made, noting that with such volume, it's not surprising a few turned sour.

James Darling, a former NFL linebacker who still owns a piece of the Ridpath, blasts the two groups currently fighting over the Ridpath's future as "full of shit," but defends Main.

"Brian Main has gone out of his way to make sure that me and him are square," Darling says. "He's been paying me $500 a month for the last three months. That's way more than any of those other dipshits have tried to do."

Local homebuilder Dave Largent, another Ridpath victim, isn't quite so complimentary. Largent says Main was never dishonest with him, but also critiques him as a "big-picture guy" who didn't look into the details. He says he wouldn't do a deal with Main again.

"My biggest problem was that when all this stuff went to crap, I was here still dealing with stuff," Largent says. "He pretty much left."

In 2009, with the real estate market dead, his relationship with Jeffreys severed and his stake in the Ridpath signed away, Main went on an extended honeymoon in Italy. That's when he started working with Hansen.

It was at a Ridpath bar, ironically, where Main first met BlueStar's Hansen.

"He would come in with his dog and we'd sit and talk," Main says. "And he'd seem like a pleasant guy." After Main moved to Italy, he and Hansen would talk over Skype about the several opportunities for BlueStar.

"I thought, I can't do real estate, why not do some entertainment stuff?" Main says. "I was the only one living overseas that he probably knew that could get him business."

They talked about BlueStar producing a documentary on Egyptian tombs, releasing a famous Eastern European pop star's music video, and re-releasing the 1981 adventure movie Roar. But each of those deals fell apart, Main says, and he and Hansen drifted apart.

"The thing about Erick is he was just a no-show," Main says. "He'd promise something and then he'd email you and say, 'Yeah, it's done,' and that was it, and then nothing would happen."

Main says his involvement in BlueStar was minimal. BlueStar's Aug. 20, 2009, press release, by contrast, celebrated Main as a talented executive, whose savviness in digital tech, film, music and international business development would transform BlueStar into an international powerhouse with offices in Europe, Africa and the Middle East.

"Brian's vast experience has helped BlueStar become a leader in the U.S. market," the release said. In fact, far from being market leader, court records showed that BlueStar wouldn't produce a single Blu-ray disc until more than three years after the press release.

The press release ostensibly quoted Main saying he was thrilled with his new role at BlueStar, and that "they are perfectly positioned to both enrich the worldwide clients, consumers and investors."

Main doesn't remember saying anything of the sort. "Do I sound like I would say something like that?" he asks.

Main scoffs at the idea he was the BlueStar's VP of European Relations in any meaningful sense. He says he got no paycheck, no stock — not even a business card. He brushes off criticism that he should have vetted Jeffreys and Hansen more thoroughly, noting that they'd also fooled plenty of other smart and diligent people. Heck, BlueStar had been endorsed by the mayor of Spokane at the time.

"I guarantee I've had dealings than more than those two people who are crooked. I've had dealing with tons of people," Main says. "I make errors in judgment like everybody does."

Main isn't done with real estate development. He's hoping to partner with local developers to transform the top two floors above his office to about 20 condominium units. But his new primary focus, selling products containing cannabidiol — a non-psychoactive component of the cannabis plant referred to as CBD — marks a major shift for Main.

It's a rapidly growing industry, filled with hope and faith that CBD — besides simply being relaxing — could be used to effectively reduce pain, treat muscle spasms and address epileptic seizures. Of course, guys like Main get in trouble if they come out and say that. Research into CBD is still in its infancy.

Last year, the FDA chastised three CBD companies in Washington state for making medical claims for non-approved uses, noting "often they do not even contain the ingredients found on the label."

"That's why this trust thing is very important to me," Main says. "I'm not just out here trying to sell snake oil. We're working a legitimate business."

So how does he prove his business is trustworthy, when he's in a business where there are so many snake-oil salesmen?

And, yes, he has the burden of addressing his ties with Hansen and Jeffreys with potential business partners. He has to stress to them that, after all the FBI investigations and lawsuits, he's come up clean. Main says he didn't ever even bother to hire a lawyer, so confident was he in his innocence.

"Every time I have somebody new, I have to explain these things to them, if I get a chance to," Main says. "It gets tiring trying to deal with this." ♦