The Man and the Machines

In the middle of nowhere, John Rigg dreams of the future — and robots 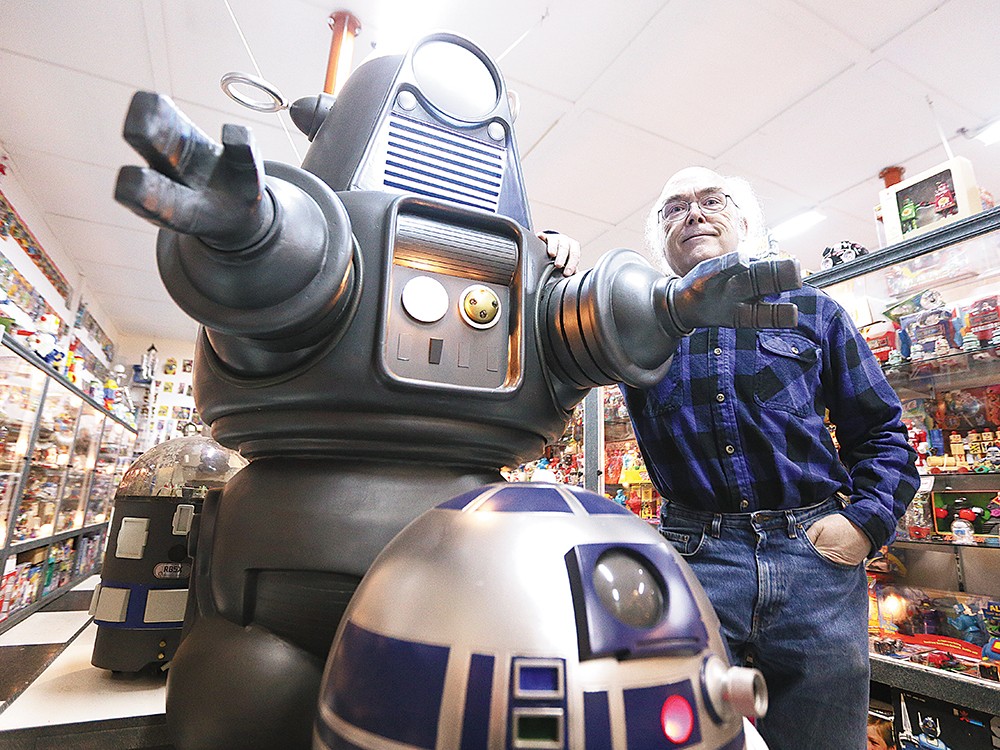 Young Kwak
John Rigg has built a robot empire out in Elk, Wash.

John Rigg lives at the end of a long country road that dips in and out of brown pastures — a place where passing drivers slow down to exchange waves, a winding gravel route where ambling families walk their dogs off their leashes down the center line. It’s a road that sees its share of big machinery: farmers carve through the land on either side in big green John Deeres, towing their broken machines behind pickup trucks on their way into town.

At first glance, Rigg’s property, in comparison to the patches of land that belong to his neighbors, is surprisingly machinery-free. Two horses stand in a pasture, lazily sniffing the grass on a cool spring day. A pair of dogs greet new cars as they pull into the driveway. There are no tractors or balers or reapers here — there isn’t even a lawn mower in sight.

Whereas farm machines dictate the life of the people who live around him in the rural outskirts of the already rural Elk, Washington, a different kind of machine dictates Rigg’s own life: a machine that’s more otherworldly, a machine that people like him have been scrutinizing for the past century — terrified and compelled by its possibilities.

In a big red barn at the edge of his property, as John Rigg walks among his own machines, a mechanical voice shouts from some corner: “PASSENGERS WILL PLEASE FASTEN THEIR SEATBELTS.” Somewhere else, a loud whistling noise echoes.

In a corner, Rigg flips switches and types into a bulky computer that probably saw its heyday back in the early 1990s. One by one, his machines — a collection of hundreds upon hundred of robots, from tiny paper ones to shiny ones that stand nearly 10 feet high — begin coming to life.

He calls his red barn the Robot Hut. And from the dusty country road, no one can see the 30-some-foot high silver robot with red eyes, attached to the side of the barn that faces the front windows of Rigg’s house. If someone were driving by when Rigg pushes the button that causes that robot to exhale a thin stream of white smoke from its grated mouth, they might just think it was a radiator steaming. Some trash burning. Who would think robots?

But while his neighbors have no idea about Rigg and his robots, the 50-something white-haired man is known around the globe, from Japan to Hollywood to Germany, for his creations. Some collectors save for years to add a “John Rigg Robot” to their collection.

Rigg points to a framed photograph on the wall inside the frigid Robot Hut — a fading photo of a boy tinkering with his toys: “See that picture of that kid with those robots? Well, that’s me. And those are the robots that I had when I was 8, 9, 10 years old. So that’s really what started it for me.”

“I was born doing it. I was wiring 110-volt circuits in kindergarten,” he says. “For some reason I was born knowing how to do electronics. I was an electronics prodigy — and the rest of this stuff, the mechanical part, I just learned as I went on.”

Around 1980, Rigg was working as head engineer for a company that made Muzak for department stores to pipe over their speakers. He found his mind often wandering back to those first robots he loved as a boy: the ones he obsessively took apart, reassembled, deconstructed, rebuilt. He disassembled those robots so many times, the tabs that held them together fell off and he was left with piles of parts that just wouldn’t be a robot anymore.

As an adult, he started scouring yard sales and swap meets, trying to find his old robots.

“Back when I started collecting in 1980, there wasn’t any eBay,” he says, “The fun of finding most of this stuff was driving to the store, driving to the swap meet, driving even to a toy dealer’s shop and looking at all of his shelves because they were like mini museums. It was finding it.”

But as an engineer, Rigg could take his collecting one step further. He challenged himself to build a life-size version of Robby, the dome-headed, prong-armed robot who first appeared in 1956’s Forbidden Planet. His first version was crude — globes stacked for legs, tire treads for a body. Rigg says it still embarrasses him that it’s out there.

“I traded it with some guy for some firewood in the end. And just like a year and a half ago, it sold at auction for almost $10,000. It was a total piece of crap,” he says. But that Robby led Rigg into the legitimate robot-building world. It led him to Bill Malone, the man who owns the original Robby. It led him to movie producers and television executives, who commissioned Rigg to build a life-size time machine for The Big Bang Theory, and props for the 1990s show seaQuest DSV.

It led him to build exact replicas of the real-life versions of all the robots he loved as a child and as an adult: Robot B-9 from Lost in Space, Gort from The Day the Earth Stood Still, Huey, Dewey and Louie from Silent Running, Tobor the Great. Johnny Five. Today, he pulls out binders upon binders filled with photographs of his creations — robots people commissioned him to build for them. Rigg robots, today, are scattered around the planet.

Today, Rigg’s creations stand high over his head — mechanical monsters towering over their own white-haired Victor Frankenstein. They stand sentinel around the edges of the Robot Hut.

In between are rows upon rows of glass cases proving Rigg’s fascination with robots: there are robots with pistons and gears in their chests. Robots who blow smoke from their mouths. Laughing robots. Attacking robots. Robots who do backflips. Robots whose boxes promise “Mystery Action!” Robots called Jim the Politician, Bob the Messenger and Steve the Butler. Santa Claus robots. “God Jesus” robots. There’s no robot that isn’t welcome here, he says.

On hot summer days, Rigg stands in the corner of the Robot Hut, playing his collection of robot-themed pinball machines — Pin*bot, Bride of Pin*bot, RoboCop. As the sun beats down on his farmer neighbors in their fields, Rigg masters the best ways to launch a ball into Bride of Pin*bot’s eyes, laughing and cursing when the damned flipper won’t move fast enough.

Above the pinball machines hangs a poster commemorating Botstock — an annual gathering of robot collectors and builders. In the center, a spectacled cartoon figure with white hair is surrounded by giant robots. They reach out their mechanical arms, as if to hug him.

It’s John Rigg: a man of the machines.

View the entire Robot Hut collection and all of Rigg’s creations at robothut.robotnut.com.