The Man in the Middle

As the city launches its wide-ranging inquiry into police conduct, it turns to one of Spokane's most formidable community organizers. 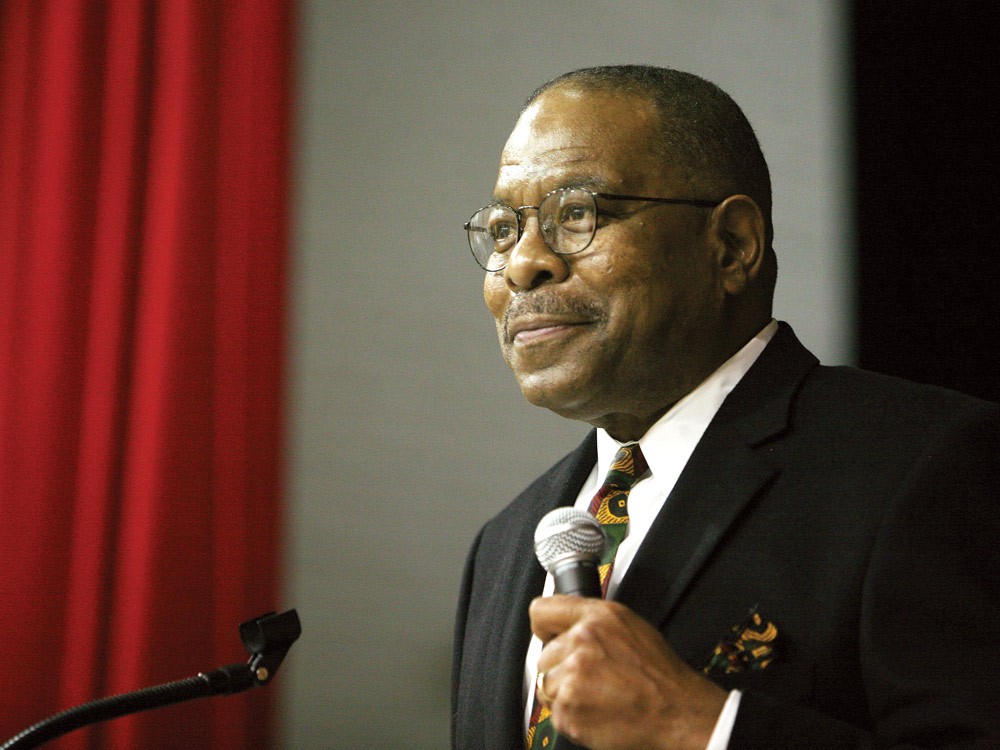 When a teacher, parent or student complains of harassment or discrimination at their Spokane public school, the district turns to Ivan Bush.

Now Bush, Spokane Public School’s equal opportunity officer, is tasked with delving into a politically charged quagmire with wide-ranging consequences for the city: whether the police department’s use-of-force policy needs to be changed and, if so, how to change it.

“We didn’t just want it to be a panel of lawyers,” says Earl “Marty” Martin, a law professor and the executive vice president of Gonzaga University, who chairs the use-of-force commission. The commission was originally envisioned by former Mayor Mary Verner, but current Mayor David Condon has given it his blessing. The City Council confirmed the commission last week.

Three of the commission’s five members are lawyers in some capacity, with experience in wading through thorny legal issues. Another is a mental health professional, which makes sense since the police have been criticized for their interactions with the mentally ill.

But what does Bush bring?

Larry Stuckart vividly remembers when Bush managed to unite all the different services of the East Central Community Center, of which he was executive director in the 1980s.

“Rather than six or seven agencies working at what they’re working at, he got everybody to help each other,” remembers Stuckart, a former executive director of SNAP. Stuckart’s son, Ben, is the newly elected City Council president.

Born and raised in East St. Louis, Ill., Bush found his calling at an early age. “I always knew I wanted to serve,” he says.

He pointed to his mother (den mother of Bush’s Cub Scout pack) and his time at Texas College (a historically black college where he says giving back to the community was drilled into his head) as formative events that led him to that conclusion.

Bush’s passion for service has taken him to the penitentiary in Walla Walla, where he assisted its superintendent for minority affairs; to Olympia, where he worked with a state agency to curb prisoner recidivism; and eventually to Spokane, where he re-opened the Martin Luther King Center in East Central before joining the East Central Community Center and, in 1992, the school district.

But for Bush, 62, fame is not a component of service. “He works very quietly,” says the school district’s superintendent, Nancy Stowell. “He’s not looking for reputation and the limelight.”

The limelight strayed briefly towards Bush last year, though, when a white supremacist unsuccessfully planted a bomb on the route of Spokane’s Martin Luther King Jr. Unity March, which Bush helped start. After a successful turnout at the march last month, Bush announced he was stepping down from organizing the parade.

Bush will soon be scrutinizing the Otto Zehm matter, among other topics. Zehm died in 2006 after police violently confronted him. Last year, former Officer Karl Thompson was convicted for his actions during the confrontation and its subsequent investigation.

“[Bush is] used to dealing with contentious issues, issues that oftentimes are in the public eye and highly charged, much as the question of use of force is,” Martin says. “I felt like he is someone who won’t be overwhelmed at all by the challenges laid before the commission.”

Conceived by one mayor and endorsed by another, the commission is meant to act as an independent entity.

It has its own budget and can hire its own legal counsel if it needs to, Martin says. He adds that the separate budget was intended to keep the commission independent and wasn’t meant to reflect badly on the city’s own legal department, which has been criticized, notably by Condon, for its handling of the Zehm case.

Besides meeting with Martin to finalize the charge of the commission, Condon says he hasn’t been doing much else with the commission but waiting to read its findings.

“It’ll definitely be the road map for the police department in the area of use of force,” the mayor says. “I’ll be taking their recommendations with the highest respect possible.”

The commission is aiming to release its report in June. Martin says there is a “strong possibility” that the commission will hold its first meeting by the end of the month.

Martin will be joined on the commission by Gerry Alexander, a retired Washington state Supreme Court justice. The commission will be vice-chaired by Bill Hyslop, a former U.S. Attorney for Washington’s eastern district. Martin also selected Susan Hammond, director of outpatient and psychiatric services for Spokane Mental Health. Martin says he wanted an expert on mental illness to look at the police’s tactics.

In his current job, Stowell says, Bush is the district’s go-to man for dealing with complaints of harassment or discrimination.

“He’s the kind of person families would come to if they didn’t feel comfortable going to principals or their teacher,” Stowell says. “He’s trusted by them. … They know he will help them get resolutions to their problems.”

Vic Forni, a former president of the United Way of Spokane, sees Bush as a fighter for equality in Spokane. He remembers how Bush convinced an economic development program that had raised money for local businesses to give some of their cash to social services.

“Ivan was at the top of or near the top of the list for his ability to bring people together,” Forni says.

Bush welcomes the opportunity to take a look at the police, saying a periodic review of any program or institution is necessary for its health.

With the debate over police accountability often clouded with rhetoric, Forni says, it’s Bush’s neutrality that will make him an asset to the commission.

“He’ll listen to both sides … whatever sides there are,” Forni says.

“I don’t think he’s coming in with any preconceived ideas.”