The Memory of Water is about Alzheimer's, death and grief. It's also an award-winning comedy. 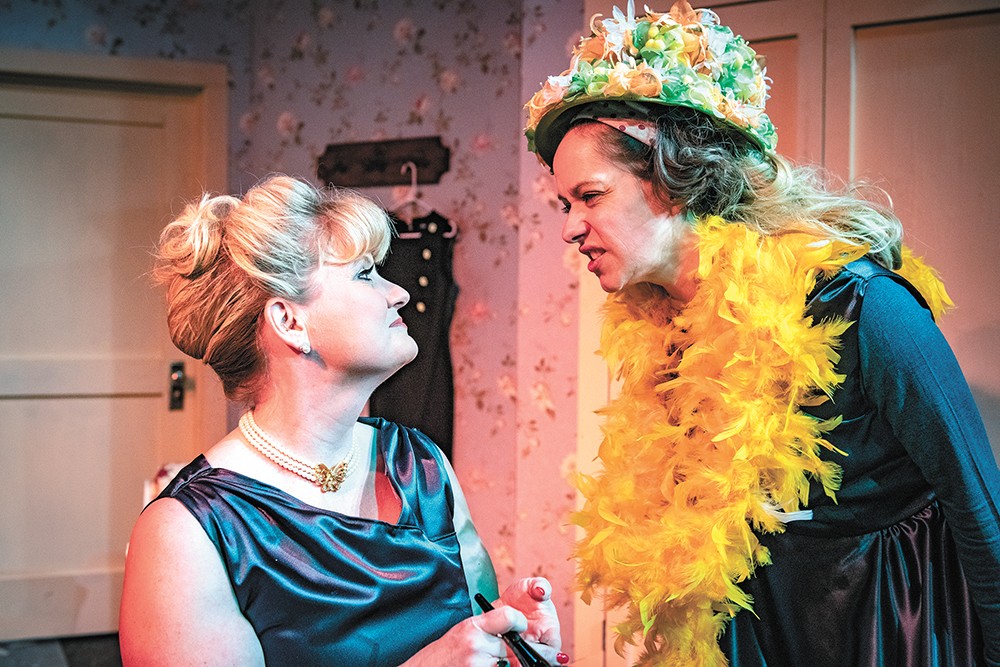 Open the playbill for The Memory of Water, currently being staged in the Spokane Civic Theatre's studio space, and you'll find something beyond the usual director's notes, sponsor ads and cast list: a glossary.

With explanations of terms like "Pan's People," "dead like," and "Barleycup," the glossary is meant to serve as a kind of cultural crash course and pocket translator for the lesser-known Britishisms that crop up throughout the play. Sometimes they're even responsible for lending the punchlines their punch.

"It's very English," says Dawn Taylor Reinhardt, directing the production. "There are so many references that I laughed out loud the first time I read the play. And then when we did the read-through, everybody's looking at me, going, 'Why is that funny?'"

For Reinhardt, the Englishness of Shelagh Stephenson's 1996 play naturally comes as more of a comfort than a caveat. Now long rooted in Spokane as an actor, acting coach and director, she originally hails from Castleton, a small village on the northeastern edge of Manchester. The play itself is set not far away from that urban hub in a seaside town on the coast of Yorkshire, a region in England's north where the spoken vowels flatten and the heady buzz of London seems worlds away.

But even for theatergoers who don't have a native appreciation of the play's terms and totems, Reinhardt says that The Memory of Water holds plenty of reward.

"I don't think I would have agreed to do it if I thought the other way. It's almost hanging myself, isn't it, really? I'm going to do this piece of art and nobody's going to get it all?" she chuckles. "But this is definitely not that kind of piece. It's very relatable."

Similar to Molly Allen's Closing It Up, which debuted at Stage Left this past autumn, The Memory of Water brings a trio of 30- or 40-something siblings — all sisters in this case — back to a single location in order to come to terms with their mother's passing and prepare for her funeral. There's Rebecca Bolster as Theresa, the eldest daughter; Nancy Gasper as Mary, the middle child; and Catherine, the youngest, played here by Molly Tage. Each sister has a personality that seems to break cleanly along the familiar lines of family dynamics.

"We have Theresa, who's a little bit neurotic. She's the organizer, the one who took care of the mother, a little bitter about that. Mary is kind of the golden child, who everybody feels got all the attention, couldn't do anything wrong. And then we have Catherine, who lived in Spain and is just a little lost soul, very hyper, did a lot of drugs and can't really find her way."

Theresa's husband Frank (Ben Dyck) is also among them, as is Mike (Dave Rideout), the married doctor with whom Mary is having an affair. Unusually, the sisters' late mother Vi (Rebecca Earley Craven) is an onstage presence as well, though she remains visible only to one of the three.

"The question at hand — and something that the audience can answer themselves — is, is she a ghost or is she in the memory of this daughter because she's the only one who sees her? The mother appears in her prime rather than as she has died, around her mid to late-70s of Alzheimer's, which is also another topic of conversation."

As the play's title suggests, memory is a recurring theme, not just in the tragic way that Alzheimer's catalyzes its dissolution but also the curious phenomenon of how it's actively shaped by our private frustrations and desires. That shaping takes place when we first experience the remembered event as well as when we later recall it. Even when we strive for accuracy, memory can be as slippery and fluid as, well, water.

"The metaphor of water runs constantly throughout this play. There are references to tears, the frozen landscape, the surrounding sea."

All this talk of tears, grief, pain and death might make The Memory of Water sound like a solemn and pensive drama, but that might be unfairly limiting. In 2000, the play won a Laurence Olivier Award for Best New Comedy.

That categorization will mean different things to different people, which is why Reinhardt warns not to expect "doors slamming and people falling" and other "slapstick, farcical" elements.

"That's not the kind of comedy it is. It's feisty, witty, with comic relief, although I've tried to keep the characters as real as possible."

As the director, however, the audience's genre expectations aren't her biggest concern. It's the temptation they might have to sneak paper-rustling glances at the glossary during the performance. ♦