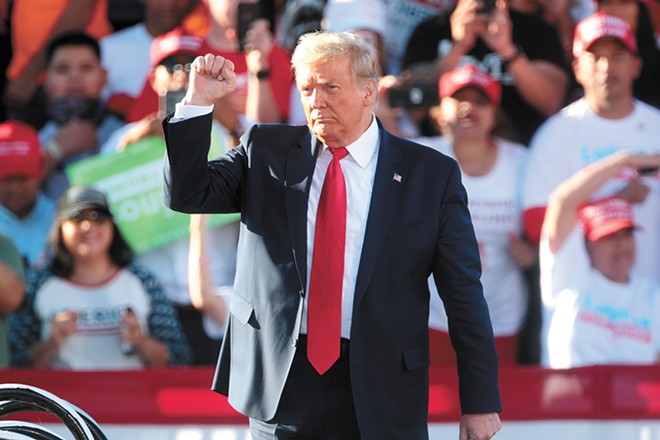 Gage Skidmore photo
President Trump has repeatedly claimed that he could only lose the election if the Democratic Party rigged the system.

By the time you read this, we may know the result of one of the most contentious presidential elections of modern times. With the exception of the debacle of the 2000 presidential contest, Americans are used to finding out the results on election night — particularly on the West Coast, where we can see results from the eastern swing states come in while we're still eating dinner. This year may well be different.

COVID has changed everything. States have scrambled to respond to the uncontrolled pandemic through a patchwork of measures, including expanding early voting and postal ballots. But the GOP has reacted to the pandemic crisis by launching an attack on democracy across a broad front, from attempts by the postmaster general to remove mail sorting machines to ramming through the Supreme Court nomination of Amy Coney Barrett to ensure that the highest court in the land is packed in Donald Trump's favor to decide electoral litigation.

The most troubling outcome of this relentless attack on voting is that it threatens to undermine the legitimacy of the election, no matter the outcome. Whether this takes the form of Trump supporters swallowing his spurious claims about voting fraud, or whether Joe Biden supporters are enraged by the GOP's disenfranchisement of the people of color, the most damaging legacy of the 2020 election might be that Americans lose faith in the electoral process altogether. Most dangerously of all, President Trump has repeatedly claimed that he could only lose the election if the Democratic Party rigged the system. He has refused to say that he'll accept the result if he loses. This is unprecedented in American history.

Americans have encountered bitter partisanship and contested elections before. But the republic has never had to face the terrifying prospect that an incumbent president would refuse to yield power when defeated at the ballot box.

The election of 1800, which pitted the incumbent John Adams against his own vice president, Thomas Jefferson, was the first time that the peaceful transition of power was tested in the United States. While 1796 marked the first partisan election in American history, the victor merely replaced the retiring George Washington, rather than turfing the incumbent out of office.

The republic has never had to face the terrifying prospect that an incumbent president would refuse to yield power when defeated at the ballot box.

The hyperbole of politics in 2020 is nothing compared to the apocalyptic dimensions of Adams versus Jefferson. Followers of Thomas Jefferson accused the president of attempting to make America a monarchy again by marrying his daughter to a son of King George III and subordinating the United States to the British Empire. Supporters of Adams painted Jefferson as a blood-thirsty anti-Christ, bent on destroying religion and bringing violence and mob rule to Main Street America.

With no TV or radio, there was no election night coverage for Americans to follow in 1800. In fact, there wasn't even an election day. Different states voted at different times, and the results slowly emerged between April and October. But the final tally was split. Not between Adams and Jefferson (Adams finished third), but between Jefferson and Aaron Burr of New York. Before the 12th Amendment to the Constitution, presidential elections did not accommodate partisan designations. Party caucuses nominated two presidential candidates in the hope of capturing both the presidency and vice presidency, which is what led to the Jefferson-Burr tie.

The U.S. Constitution provides for the House of Representatives to break a tie in the Electoral College. But John Adams's Federalist Party controlled the House. With the majority despising Jefferson and distrusting Burr, the House went through 35 ballots in January and February 1801 without breaking the deadlock. Fear and distrust spread around the country. Americans armed themselves, accusing one another of trying to steal the election.

In the end, Alexander Hamilton helped to break the deadlock in the House by using his influence in favor of Jefferson. While Hamilton and Jefferson had been bitter rivals in George Washington's Cabinet, Hamilton utterly despised Aaron Burr, his archnemesis in New York politics. Jefferson was the lesser of two evils. The Constitution worked: Adams left the White House peacefully, and Jefferson was sworn in as the third president of the United States.

The peaceful transition of power is America's most important political tradition. Even in the most partisan of moments and during the most trying of circumstances it is essential that we all respect the integrity of the electoral process and the U.S. Constitution. We must not lose faith in democracy.

The result of 2020 may take some time to determine, but it is important that we reject the ranting of demagogues who groundlessly argue that a delay in announcing the result is evidence of fraud. And if Trump does lose, he must accept it. For in America, we don't have kings. Rather, in the words of revolutionary Thomas Paine, "in America the law is king." ♦