Spokane's next city attorney would prefer if you didn't hear about her all the time. 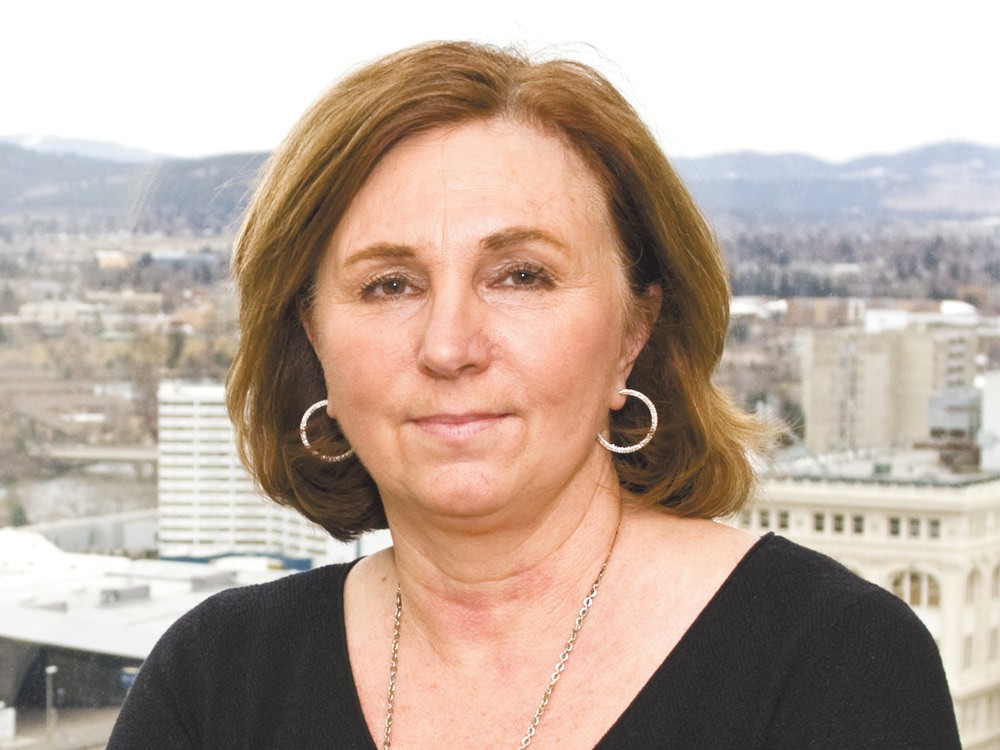 On the same day it was reported that a fired Spokane police officer might get his job back despite fleeing a drunk-driving crash, Mayor David Condon called Nancy Isserlis.

“The mayor absolutely has to trust his city attorney,” city spokeswoman Marlene Feist says. Feist says no single factor led to Delaney’s dismissal. “[The mayor’s] seen a much better fit for him with Nancy Isserlis.”

If she is approved by the City Council, Isserlis, an attorney at the Spokane firm Winston & Cashatt, would assume a pivotal role in trying to repair the shaken relationship between the public and the police force, while also having to deal with the routine lawsuits that the city has to wage and fend off.

“I think the police accountability and the ombudsman issues, at least for the time being, [are] going to be front and center. I think I can do my part in helping this community heal,” Isserlis says. Then, she added, “I can’t make it heal.”

Also on her plate: dealing with the fallout from the council’s decision to reject a settlement with Brad Thoma, the officer whom the state’s Human Rights Commission ruled would have to be rehired, despite his causing a drunken crash.

And then there’s Condon’s heretofore-unfulfilled campaign promise to fire Assistant City Attorney Rocky Treppiedi, who has been criticized for his zealous defense tactics against people who sue the city.

“I assume office on April 2, assuming the council confirms me,” Isserlis replied when asked if she will exercise her power to fire Treppiedi. “On April 2 and soon thereafter I’ll be making a lot of decisions, including that one.”

Though the city is conducting a national search for a police chief, Condon opted to use his authority to nominate Isserlis for the position.

“I think he found the skills that he wanted in Nancy and didn’t see the need to put on that search,” Feist says. “The check and balance in this case would be the required confirmation of the City Council.”

Councilman Mike Fagan, who served with her on the public safety transition team, called her “very professional,” but says Delaney’s firing and her appointment were a bit of a surprise.

Council President Ben Stuckart spoke warmly of Isserlis, having known her from her time on the board of SNAP. Stuckart describes the changing of the city’s legal guard as an opportunity for the council to show itsbackbone in the wake of the Thoma debacle.

“The concern that’s been voiced for the council is that we’re too eager to just settle on these [lawsuits],” says Stuckart. “Possibly in the past, people who [made] mistakes weren’t warned strongly enough that their action would have legal repercussion.”

But that defiance may cost the city. After rejecting Thoma’s lawsuit last week, the former officer’s attorney filed a $4 million lawsuit against the city. It will be up to Isserlis to fight that.

On top of that, Isserlis would join the ongoing negotiation with the Spokane Police Guild and the Lieutenants and Captains Association, with both organizations’ contracts ending at the end of this year.

Tim Connor, communications director at the nonprofit Center for Justice, welcomed Isserlis’s involvement in the negotiations. The center has sparred with the guild over expanding the police ombudsman’s powers.

“It’s a real comfort to us that Nancy Isserlis is the city attorney now at this key period,” he says. “[Delaney] has not distinguished himself as an effective advocate for the city when it comes to negotiations for the Spokane Police Department.”

Both the city and the unions sat down and shared proposals last month and are planning another meeting, says Lt. Joe Walker, president of the Lieutenants and Captains Association.

Isserlis would ultimately like to shrink the public profile of the city attorney’s office.

“The business of the city attorney’s office generally shouldn’t be making front-page news, and it has been for quite a while,” Isserlis says. “And I’d like to get back to a point where everything’s just not crisis-all-the-time, like it seems to be now.”