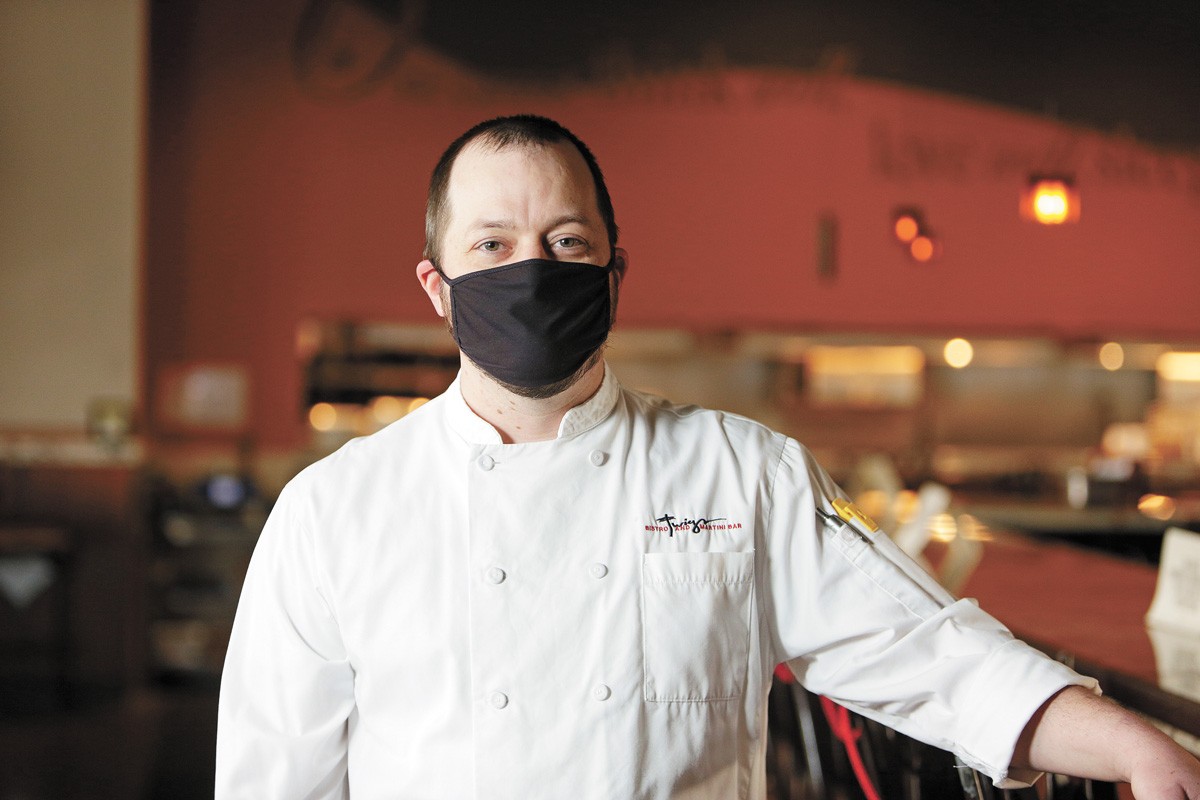 After 12 years with Spokane's Twigs Bistro & Martini Bar, chef Jared Schlosser has reached the top of the ladder. A few months ago, Schlosser was promoted to Twigs' corporate executive chef, going from overseeing the kitchen of its River Park Square location to all nine of Twigs' regional restaurants in Spokane, Tri-Cities, Vancouver and outside Washington in Utah, Idaho and Texas.

Born and raised in the Inland Northwest, Schlosser says he's always loved to cook, and became hooked after landing one of his first restaurant jobs at the now closed El Sombrero Mexican restaurant in North Spokane. In 2004, he enrolled in the culinary program at Spokane Community College, and afterwards bounced around among a few local restaurants (Anthony's, Prospector's) before landing in 2008 at Twigs' original location in Wandermere.

While 2020 has been a year of unprecedented challenges for all restaurants, Schlosser is optimistic about the future of Twigs. But he also worries about the lasting impacts on his laid-off staff during Washington's second dine-in ban this winter.

"It's heartbreaking to have to go tell them, 'Hey, we're closing up shop again,'" Schlosser says. "You wonder if they're going to come back, and are they going to keep coming back. I would hope they would. The hardest part is looking out for everyone."

We recently chatted with the newly promoted chef about subjects both fun and serious. Here's what he had to say.

INLANDER: When did you know you wanted to become a chef?

SCHLOSSER: I don't know if there was a specific time. My dad was a general carpenter, and I did a lot of construction with him growing up, so when it was time to figure out what I wanted to do — keep cooking or go work with him and do some carpentry — I just kind of did some pros and cons: Well, people gotta eat and there's always gonna be a job, we'll see where that takes me, and that was when I decided to look into culinary school. I always had a good time in the kitchen — there's loud music and it's fast paced and hot and there's fire and it's just really intriguing.

Name one restaurant in the Inland Northwest you return to over and over again, and share why.

Probably the Flying Goat. I know a lot of people who have worked there. It's a date spot; me and my wife can go down and grab some beers and pizza. My wife really likes the Lacrosse [pizza], and I just try whatever they've got. The way they put their flavors together is really nice.

I don't know if I could survive without a KitchenAid mixer.

Who's a chef you look up to and why?

I'd have to probably go back to culinary school and say chef Peter Tobin. When I was in school I ended up spending one extra block of a year with him, and it was fun to go do Epicurean Delight with him and see how he worked. He was fun to be around.

Finding a way to keep your staff accountable and still being the guy they want to see come through their door. I think as an executive chef I always have had cooks that really love to work with me, and when things got shut down it was not a question of whether they'd come back, it was 'whenever you need me, I'm there.' I have always had really loyal people working for me, so now that I'm in charge of not just one but nine restaurants it's, I guess, trying to find that balance where you're keeping the other restaurants in check and making sure they're doing the right thing and, you know, managing their staffs appropriately without being one of those stern people.

I really like the Morrocan beef as an appetizer. I always go to the pesto-crusted chicken for my entree. It's simple but still delicious.

Whipped cream on your pumpkin pie.

I'd probably say somewhere in South America. I just really love Spanish flavors and Mexican-influenced food, whether it's chili peppers or corn and the different ways they make tortillas. There's just something so simple about a flour tortilla, that you can make it by hand on stone. I think a lot of the flavors I enjoy would be in that region.

What's the biggest myth about chefs we should know?

That we've cooked everything that you could possibly think of cooking. People think we're the know-all, tell-all, but it comes down to opinions and what we think is the best.

Probably boxed mac and cheese. It could be either the cheese in a weird package or the super salty cheese in a bag poured over some cooked noodle mix. Whenever I sneak away from the wife and get to eat some unhealthy food, that's what I'm going for.

I'd probably be stuck doing woodwork, some sort of construction. I really like working in finish work in construction, doing tile and different remodels of basements and kitchens. That was always fun to get into, and I always like demolition — ripping down walls and cabinets and seeing it go from bare bones into something new.

Describe the Inland Northwest's culinary culture in one word.

Energetic. We have a lot of chefs in the Inland Northwest who are super creative and super smart and have awesome ideas. You visit some of these places and the menus you see with the different combos of flavors and ingredients they put together is really fun to see. I feel like there is always something different and something new popping up. Maybe not recently since everything is plagued by the pandemic, but I think before this, that is how it felt — the scene is super energetic. ♦

The original print version of this article was headlined "Chef Chats: Jared Schlosser"