There's always a tangible air of excitement that runs through an audience as they file into their seats and get settled for a live theater performance. A hush falls over the crowd as the lights dim, signaling the show is about to begin. Finally the moment arrives: The first actors appear on stage, and the audience is swept for the next few hours into the world of the characters and their story.

That feeling is finally returning to Spokane, starting with a production of Shakespeare's Twelfth Night by the new Spokane Ensemble Theatre.

The show runs July 29 through Aug. 1 at the Northwest Museum of Arts and Culture amphitheater, so while some of the typical ambiance of a theater such as technical lighting and curtains will be missing, the feeling of witnessing live, in-person theater will be very much alive, and welcome after more than a year of crowd restrictions forcing local theaters online. 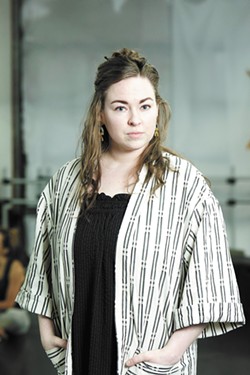 The theater company was formed this year as a collaborative effort between Josephine Keefe, Chelsea DuVall and Rio Alberto, all artists within the Spokane theater scene.

Keefe, who is also the executive director of Twelfth Night, says Spokane Ensemble Theatre will focus on professional productions in addition to providing opportunities for professional training. She says this is coming at a pivotal time as Spokane is reopening and expecting a jump in TV and film work in the area.

Spokane Ensemble Theatre chose Twelfth Night because of how relevant it is to today with its themes of gender and identity. Keefe describes Twelfth Night as a romantic comedy that touches on love and individual expression.

For DuVall, who is directing the show, she was drawn to Twelfth Night because of her interests in identity and queerness, and because the play's content is germane to where society is today in terms of these topics. She also chose the show because it is a comedy, which was fitting both for an outdoor performance and for one of the first live theater shows in Spokane after the pandemic, she says.

"It feels like the right decision to bring people some lightness and some joy, and find a sense of community and communing together in a space that's safe," DuVall says.

In the play, the protagonist, Viola, is shipwrecked on the shores of the kingdom of Illyria. Her twin brother, Sebastian, has also washed ashore, although neither knows the other is alive.

Spokane Ensemble Theatre's Twelfth Night will incorporate movement and absurdity, and DuVall says she hopes the production feels both contemporary and familiar for audiences. As a director, DuVall says, she wants audiences to experience the ambiguities within the work for themselves.

Robert Tombari, resident artist at Stage Left Theater, plays Sir Toby Belch in Twelfth Night. He says he jumped at the chance to be involved in the show because of his love for Shakespeare's works. Tombari is excited that Shakespeare is happening in Spokane.

In working with Spokane Ensemble Theatre, Tombari says he has been able to explore movement and physicality more, and that the production is a true ensemble piece. Shakespeare is all about the ensemble, he says, and Twelfth Night has a cast of 14, each role essential to the story.

Since the show is being performed outside, Tombari says he feels this is the perfect way to ease audiences back into seeing live theater. Performing a show outside also means the show doesn't rely on technology, but instead on the actors to reach the audience through their storytelling.

Although Tombari worked on several virtual shows throughout the pandemic, what he's missed the most about live theater is the audience interaction.

One issue in theater communities across the country is the way the stories that are often told and performed are through a White, male lens, says Keefe. At Spokane Ensemble Theatre, the company wants to create pieces that spark dialogue about the kinds of texts we often see, starting with Twelfth Night.

"We saw this as an opportunity both to reinvigorate the theater arts scene with a production that challenges our audience's mindset about what Shakespeare is or could be, and also excites our community back into the live theater, live performance setting," Keefe says. ♦