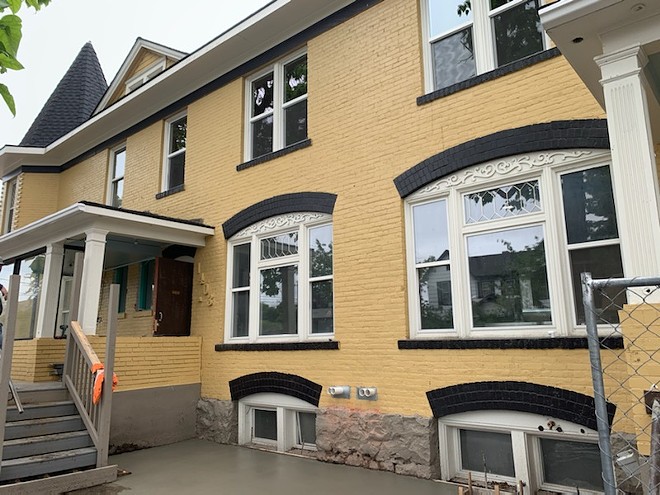 Vieux Carre NOLA Kitchen is a new Cajun-themed restaurant moving into a 1903-built brick building at 1403 W. Broadway that's framed by a pair of Victorian-style architectural towers. It was recently painted a warm, soft yellow.

Building owners Bob Kelley and Chris Skinner are teaming up with Korri McElfresh for the eatery, which is slated to open in late summer or early fall.

"New Orleans-based food and atmosphere, that is what we're going for," McElfresh says. "We're trying to capture the feel of New Orleans; the lush green with the old, exposed brick."

While the project is still seeking an experienced head chef, says McElfresh, who has 17 years in front-of-house restaurant roles, the menu will center on classic Cajun flavors and dishes that combine elements of French and Spanish cuisine.

"So we'll have rabbit etoufee all the way to shrimp po' boys and oysters any way you want them — fried, fresh on the shell, shooters, an oyster po' boy," she says. "We're really hoping to highlight some crawfish all the way to muffaletta to pecan pie. Just all things Southern and Nola that you think of when you go there."

Vieux Carre (pronounced voh care-eh) is French for "old square," the name also given to New Orleans's famous French Quarter. A classic 1930s cocktail of rye whiskey, cognac, sweet vermouth and bitters also takes this namesake, and will be a signature drink at the restaurant's full bar.

Originally, the partners' plan for the eatery was an upscale pub called Mythos, as sort of an H.P. Lovecraft-inspired homage that paired well with the tabletop game shop sharing space in the building. The Gamer's Haven, co-owned by Kelley and Skinner, is soon moving into the building's west end and part of the second floor from its current home in Spokane Valley.

"We'll have some geek-influenced stuff that people will pick up on, but realizing we're by the courthouse and surrounded by law offices, we didn't want to scare away the lunch crowd," Kelley explains of the change in plans.

The fact that the region doesn't currently have a dedicated Cajun restaurant was another reason owners decided to make the switch.

Gamer's Haven customers playing casually or in regularly scheduled tournaments for popular games the shop sells, like Magic: The Gathering and Warhammer 40K, will be able to order food from Vieux Carre, but the restaurant won't be a dedicated gaming space, McElfresh says.

A website and social media pages for the project are in the works, as well as plans to apply for the property to be added to the local historic registry.