These days, recipes come in two forms: Online recipes with introductions the length of a Proustian novel ("every time I have a petite madeleine, I can't help but be overcome by a remembrance of things past..." or on 3x5 note cards, handwritten and stained with food, that have been passed down from generation to generation.

Wanna guess what kind of recipe "Cowboy Soup" is?

She lived way out in the country, on a cattle farm up in Stevens County. It was the sort of home heated by the pellet stove in the living room. In the summer, they'd swim in the pond or in an old satellite dish they'd fill with water.

And in the winter, Grandma would make "Cowboy Soup." Fresh vegetables from her garden. Ground meat from one of their freshly slaughtered cows.

Today, it's become a tradition for Jonathan Bingle's own family as well.

"When it snows for the first time, my wife is like, we need to make Cowboy Soup," Bingle says.

They make a huge batch, freeze it and eat it all winter.


It's a simple recipe, but a hearty one. And don't worry if you're concerned about allergies — despite the name, the recipe does not contain any actual cowboys. 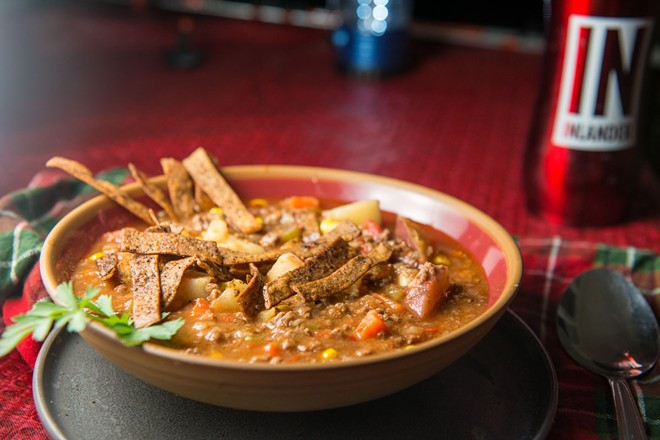 5 red potatoes, quartered or cut in eighths, depending on size
1 small can of tomato paste
1 15-ounce can of diced tomatoes

If you'd like, add seasoned tortilla strips as a garnish.


1. Add the diced onions, celery, garlic and ground beef into a big pot or Dutch oven on medium heat. Brown the meat and drain the fat.
2.  Add literally every other ingredient left, making extra sure to not forget to put in the canned corn and the can of tomatoes.
3. Bring the whole glorious cauldron to a boil. Reduce heat to a simmer and cover. Check it after 20 minutes. Taste to make sure that the carrots and potatoes are tender. Adjust seasoning if you want.
4. Serve with seasoned tortilla strips, big crusty bread, or anything preferred garnish.

Turns out, Inlander staffers are writers — and not cooks — for a reason

HOW I SCREWED IT UP A BIT


As long as you get the right ingredients at the grocery store and remember to put everything in correctly, this recipe is very simple. That's part of the appeal — you'd think it was foolproof. But, if so, you've never met a fool like me.

1. Start with the ingredients. I grabbed the potatoes and peppers during a frenzied 10 pm employees-had-to-kick-me-out Rosauers shopping trip Tuesday evening, but I knew I had ingredients like ground beef and baby carrots at home.

Heck, I knew I had had at least a pound of fresh ground beef in my fridge for at least a week! But as I stared at the ground beef package, considering opening it, a creeping hairs-standing-up-on-the-back-of-my-neck sense of unease took over. The expiration date was far more historical than recommended. It's the sort of paranoia that had me, once again, starting a Google search with "safe to eat if..."

Ultimately, cooking is perhaps the only hobby that takes full advantage of all five senses. And so I brushed aside my fears, opened the ground beef packaging, and took a grand, stop-and-smell-the-roses whiff of the meat.

My nose is very finely tuned to alert me to spoiled ingredients through the subtle signals of explosive vomit. After rinsing my reaction out of the sink, I made the decision to not, in fact, cook with that particular strain of ground beef.

Without any other reliable meat source, Bingle's Cowboy Soup would have to wait another day.

Don't Sauté Your Laptop (and Other Home Cooking Tricks): The mistakes, high stakes and burnt steaks of teaching yourself how to cook

2. Flash-forward 24 hours: I've got the market-fresh meat ready to use. I just need to slice up some baby carrots. I groped around in the depths of the Forgotten Zone— the Feral Lands — of my fridge and extracted the baby carrots. But there's a problem with babies. Wait long enough, and they grow up.

But these carrots grew up wrong. They had become Eldritchian abominations, oozing with pain, hissing with dread, forever imprisoned in the nightmare borderlands between vegetable and animal, between life and un-life.

3. Toward the end of cooking the soup, I kept tasting spoonfuls of the soup. It felt like something was missing. This possibly qualified as Farmhand Soup. But Cowboy Soup, not a chance. I began to question the culinary prowess of Bingle's grandmother. Maybe his feeling of this soup had been skewed by love and nostalgia?

I tasted it again. Wait, wasn't there supposed to be corn in this. And, like, tomatoes? I was so proud of finding non-rotten food to put in the soup, that I had forgotten two ingredients: one of them vitally crucial, and the other of them corn.


Somewhere in the chaos of my messy kitchen, I found both missing ingredients. I grabbed the ring on the top of the tomato can and pulled it open with all the strength and vigor I could muster — and sliced my right index finger clean open on the can's metal edge.

I hadn't experienced a cooking injury that gruesome since my knife slipped while trying to turn a lemon into a Pac-Man for my 2017 video-game-themed "Super Smash-dinner bash" party.

But for all those mistakes, by the time I sampled the final result — Band-Aided finger gingerly holding my soup spoon — the soup had won my admiration. Hearty and comforting, just like Bingle promised.

DESIGN YOUR OWN VARIANT

What I love about this kind of soup is the customizability of it all. You can see that in the recipe card itself, which has "can corn" written in blue pen on the ingredients card, while corn isn't mentioned at all on the recipe card.


"That might've been my dad," Bingle says in a text message. "He adds corn to everything."

I don't necessarily recommend my own improvised addition — a few drops of finger blood — but there are plenty of possibilities: Slice up some andouille sausage, saute it and toss it in. Try it with some lentils. Add in some taco seasoning. One of the most underrated soup additions? Beef jerky. Seriously. I learned this from the carne seca substitute I used in a Brazilian Black Bean Stew I made a few years ago. The broth rehydrates the jerky a bit, but the meat still has the strength to stand up to the simmer. Try it if you don't believe me.