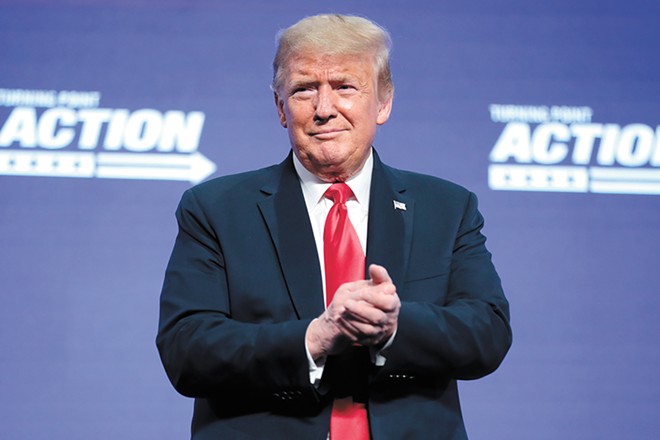 President Trump told journalist Bob Woodward — on tape — that he knew the coronavirus was deadly and difficult to contain, yet that he made the very deliberate decision to lie to the public about just how disastrous it would be for the country. He says he lied because he didn't want to create "panic."

Few seem to be buying that bit of self-serving nonsense, so Trump, like on most days, has found himself under fire. Indeed, countries that did act, that did follow the science, did use face masks, did promote social distancing, those countries have nowhere near the cases and fatalities that we have suffered in the United States. And Trump is to blame: for bad judgment, for his lies, for the almost 200,000 dead Americans (so far) and for the 6.5 million Americans who have become infected with the coronavirus.

The president has filled some of his time — when he is not watching Fox "News" — by attacking the military. John McCain remains his favorite target. You remember what Trump said: "He's a war hero because he was captured. I like people who weren't captured." So now he has broadened his disdain by calling those who serve "suckers and losers."

Concerning climate change: Trump doesn't seem to care about it — even though forests, grasslands and homes are all on fire. Five towns in Oregon, along with our own Malden just south of Spokane, have burned to the ground just since Labor Day. So many hurricanes are pummeling the South, they have run out of alphabet letters to name the new ones still coming.

Trump has nothing constructive to say about any of this. His sense of decency, duty and reality simply does not exist.

His performance last week in California was both revealing and embarrassing. The fires, according to him, were not caused by a drier, hotter climate; no, this was caused by leaves not raked and exploding trees? He doesn't even explain what he means by any of that.

Experts tell us that Putin's Russia once again is working to influence the American election. Trump knows that Putin wants him to win, so likely he actually hopes they are interfering. Remember his line four years ago: "Russia, if you are listening..."

In the meantime, he continues to rally his "base," even ferrying them into his rallies where he refuses to wear a mask and applauds his base for doing the same. What's worse, he actually denounces scientists who disagree with his uninformed blatherings.

The Centers for Disease Control predicts that a virus vaccine won't be available before the election; indeed, if we are lucky, we might have it by the second quarter 2021. Trump dismisses this statement. Mostly it's the bad news he doesn't like.

The latest CDC statement that masks are the single most important way to control the virus also did not set well with Trump. As everyone knows, Trump doesn't wear masks — which, of course, means that members of the Trump "base" wear no masks, which puts him at further odds with the CDC, aka science, aka reality.

To fend off this unwanted news, Trump is now listening to an out-of-the-mainstream scientist who is actually promoting the idea that more deaths are good in that this will promote what he calls "herd mentality" (actually, herd immunity). The idea is deadly nonsense, but this guy is telling Trump what he wants to hear. So the debate in the White House, to the extent there ever is any, has been minimized — perhaps even shut down.

One of the roles that all presidents play is "setting an example." Trump has flunked on the example front since day one, but these latest failures — on health and climate — have and are proving to be even worse. Which brings me to my greatest concern: Given what we now know about all of Trump's failures and cover-ups, one would think that he would be trailing Biden by at least 30 points, give or take. But a count taken before the Woodward bombshell shows he is down by about six to 10 points nationally, which puts Trump in about the same place he was four years ago at this time against Hillary Clinton.

Trump has no chance at all of winning the popular vote, but remember, our undemocratic Electoral College system put him in office. He lost the popular vote by nearly 3 million votes and still won. This could happen again.

One thing's for sure: America is about to find out if Trump was right when he said back in 2016 that he could walk down Fifth Avenue, shoot someone in the street, and "not lose one voter."

Oh, one more thing: For making the single dumbest remark of the year, I nominate Maine Sen. Susan Collins. She voted to acquit Trump at his impeachment, and then justified her vote by saying: "The president has been impeached, that's a pretty big lesson." ♦

Robert Herold is a retired political science professor and author of Robert's Rules.