The North Idaho mobile food scene continues to evolve, with plenty of new trucks, locations and ways of reaching customers 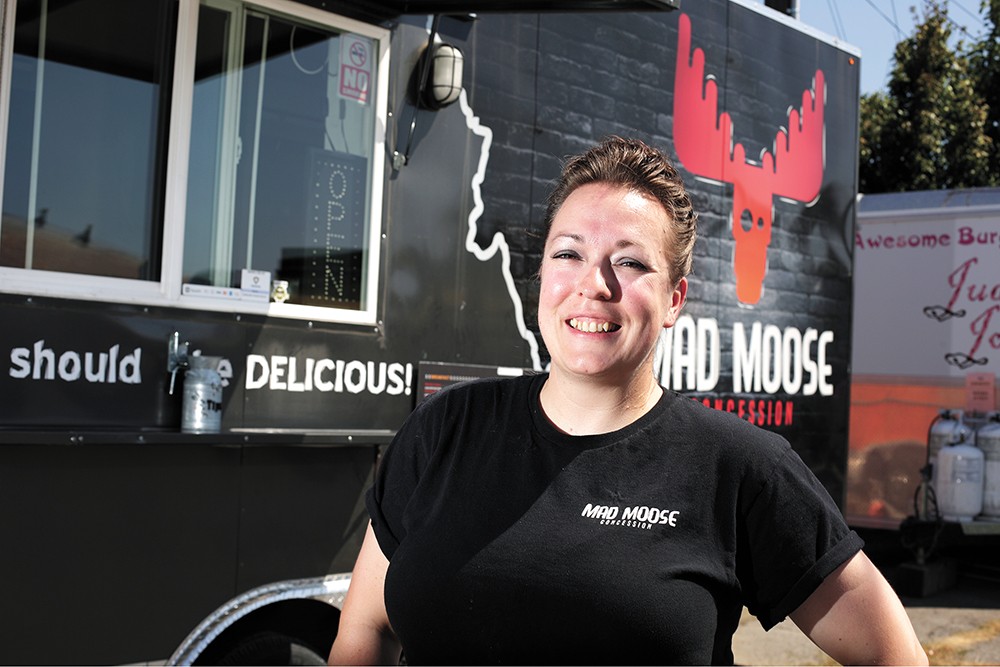 Just as food trucks have given Inland Northwest diners an even broader range of options, food truck owners, too, have many options to reach them as the industry continues to evolve.

Some food trucks, like the 10-year-old, bright yellow Best Sandwich Shack in Coeur d'Alene, install themselves so as to appear permanent. The restaurant on wheels can always be found parked next to Best Avenue Food Court (510 E. Best Ave.).

Some trucks have a symbiotic relationship with their mothership, like Meltz Extreme Grilled Cheese, which has both a brick-and-mortar in Coeur d'Alene (1735 W. Kathleen Ave.) and mobile operation that can reach diners outside that footprint. Others, like Meyer's Gourmet Sandwiches, spend summers at numerous locations, many of which don't serve food, like Up North Distillery and Slate Creek Brewing.

Come this fall, however, both roving and semi-stationary North Idaho food trucks will have a new place to go. Prairie Pavilion is an efficiently designed food truck court on Coeur d'Alene's north end that just might prompt other vendors to ask, "Should I stay or should I go?"

Prairie Pavilion (7777 Heartland Dr.) features 39 parking spots, room for 13 food trucks and a covered, semi-enclosed eating area with rollup doors for warmer weather and a heater for winter. The park also offers necessary water, sewer and grease hookups, along with garbage and recycling, as well as a highly valued feature: a restroom.

The restroom is one of the few features still underway before a soft opening later this month, co-owner Kym Nagel says. She and husband Nate teamed up with Jason and Laura Quast, who own the local Jitterz Espresso franchise (also getting a new drive-through at Prairie Pavilion), to open the new location. It will feature new and existing food trucks, some of which the Nagels became familiar with through their other business, Premier Auction House in Post Falls.

"There are literally 10 housing developments around [here]," says Nagel, who hopes Prairie Pavilion can capitalize on increased traffic from housing and commercial businesses along Coeur d'Alene's northwestern border with Hayden and Post Falls.

Vendors scheduled to semi-permanently set up at the pavilion include a mixture of veterans like Taco Works — Nagel notes that people refer to its longtime owner Omar Magdalena as "the godfather" — and newbies like Eat Fit, which offers vegan, vegetarian, keto and paleo meals.

Rustic (309 E. Sherman Ave., Coeur d'Alene) and Messy's Burgers (6285 Maine St., Spirit Lake), both of which have permanent locations, also plan to be represented at Prairie Pavilion with mobile units.

Mad Moose polled its customers, chef/owner Nicole DeFrehn says, and discovered that most hail from north of Coeur d'Alene's city center, prompting her to relocate the truck to better connect with its regulars.

So why, in the first place, would a business owner pick a food truck over brick-and-mortar?

"Initial investment, overall cost and keeping overhead down, and the ability to be mobile," says DeFrehn, who's been cooking since 2001. That means keeping the menu small and focused — try the truck's eggs benedict with homemade buttermilk biscuits ($9.50) or the Mad Bundle ($5.75) of egg, sausage and cheese wrapped in fry bread and fried — which means a small inventory, too.

While some trucks like the security of a dedicated spot, others tend to move around more, going where the people are, and especially to drinking establishments.

Meanwhile, down south in Moscow, Grub Wandering Kitchen, aka "the Grub Truck," is typically parked outside the Garden Lounge (313 S. Main St.), even though summer means around a 50 percent dropoff in foot traffic, owner John Fletcher says. Its macaroni and cheese ($6-$9), with options like truffles, habanero and fresh garlic, is the truck's most popular dish, says Fletcher, who's run the truck since 2013.

Farther north in Sandpoint, food trucks are concentrated in several areas. Ohn's Thai Plate is a longtime anchor at the small Oak Street Court (317 Oak St.), recently joined by La Catrina Cocina and newbie Green Go's Fusion Food serving burritos and tacos with grass-fed beef and organic produce. Soul Picnic, which is near Evans Brothers Coffee (524 Church St.), has been serving up veggie-forward items like their southwest rice bowl ($9) since 2016.

Sandpoint Curry, which used to be an order-and-pickup place initially marketed as Curry in a Hurry, now splits time between a fledgling food truck court called 7Bistro (870B Kootenai Cutoff Rd.), which also houses Taco Tacos, and serving at area businesses, such as MickDuff's Brewing.

Newcomers to Sandpoint's food truck scene include Heart Bowls, offering smoothies ($5-$9) and rice milk and banana "mylkshakes" ($5.50). Heart Bowls is currently parked outside of what's expected to be an all-day café called the Longshot on South Boyer.

Also new, Shilla - Korean BBQ with Seoul has taken the favored approach of going where the people are, teaming up with the uber-popular 219 Lounge (219 N. First Ave.) to offer things like potstickers ($7/five) and skewers of chicken, ribs or pork belly ($6/two).

"Shilla provides our customers and others with a unique dining experience for lunch and late night dining," 219 owner Melvin Dick says. "It is a win-win for both parties. We have a great location with a lot of events and music going on, which attract crowds."

Finally, for those wondering why we're just now mentioning food trucks that have been around for a few years, the biggest reason is their inherent mobile nature. Sometimes we have them on our radar only to discover they've moved to focus on serving a new area, like Sandpoint's Twisted Kilt Black Iron Grill, which posts its location on social media and serves sweet and savory cornbread waffles. Or we just haven't heard about them yet, like I Don't Care Asian Food Truck (7352 N. Government Way, Coeur d'Alene), as well as a potential handful of others we'll have to catch up on in the next food truck roundup. ♦

After more than two years, a strike at the Lucky Friday could soon be over