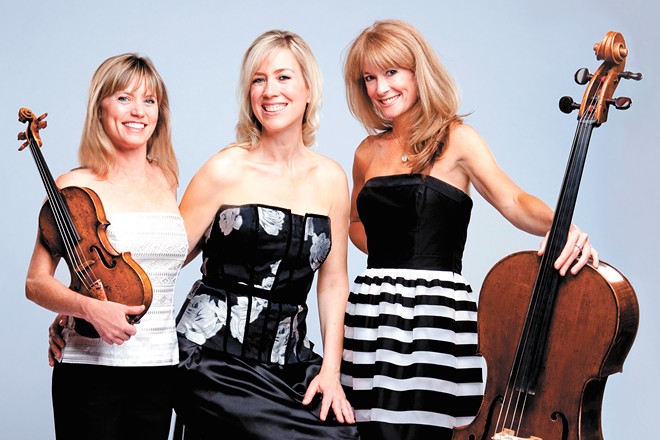 Over the past 18 months, the ways in which we mark special occasions have had to change. Commemorations of milestone events that would have otherwise taken place in person have been muted, virtualized or shuffled.

For Northwest BachFest, it's been a little bit of all three. The festival's celebration of the 250th anniversary of Ludwig van Beethoven's birth, technically a 2020 affair, ended up being adapted to the protracted pandemic era though two separate video series, Postcards from Spokane and Across the Miles. It's also been extended into late 2021 as a part of the festival's official return to live performances September 9.

"A pause, in hindsight, is always a good thing — to survey what's going on and how you're doing it, what the purpose and the motive is, what you appreciate and what you take for granted," says cellist and festival Artistic Director Zuill Bailey.

"At the Northwest BachFest, we are very lucky in that we're a highly flexible organization that has prepared so many different ways to reach people. So when all this went down, we had already been working on a virtual element for years, not knowing that it was going to be so usable and so useful during that time."

Bailey's referring here in particular to Postcards from Spokane, a video project that began in mid-2019 along with an early kickoff of his organization's recent Beethoven-inspired programming. The project involved recording performances of Bailey, violinist Kurt Nikkanen and violist Scott Rawls performing Beethoven's String Trio No. 1, Op. 3 in various iconic locations around the city. Each of the five movements was then broadcast or streamed as a kind of individual "postcard."

Supported by funding from Spokane Arts, city-level marketing budgets and generous amounts of pro bono work from Hamilton Studio, the same production house that would later help the Spokane Symphony in its own shift to digital media, BachFest was able to transition fairly smoothly to a virtual format even as COVID-19 cases were peaking. Follow-up research has indicated that Postcards' TV and online viewership numbered in the hundreds of thousands.

But as successful as initiatives like Postcards have been, Bailey is eager to reconnect with live BachFest audiences and his musician peers — "my people" is the phrase he keeps using as a collective shorthand — to wrap up the Beethoven anniversary festivities. At the first concert of the September series, joined by pianist Elizabeth DeMio, he'll be performing Beethoven's complete sonatas for cello and piano back to back.

"So many people are fatigued by sitting in front of their computers and their screens for so long that we wanted to make this a singular, special week of concerts," he says. "Those who go to it get to experience something that they know is theirs and theirs alone. It's thrown in the air and it's gone, and that in itself is the magic of a live concert. I want the audience to know that, as they're sitting there and they look around, that's it! It's for them. They're the ones who get this; and when they leave, they're the ones who take it."

And, as he points out, the five chronological sonatas lend themselves to this kind of intimate, evanescent experience.

"The five Beethoven sonatas are interesting because they span his life. The first two were composed together, and the A major, the third one, is right in the middle, and then the fourth and fifth come a little later. They likewise span the time before his hearing issues, during his hearing issues, and right when he's losing his hearing. By the last slow movement of the fifth sonata, you feel like you've not only witnessed the story of Beethoven's life but the evolution of a genius and what age and maturity do to perspective."

The other two concerts in this BachFest series, scheduled for Sept. 13 and 14, feature the acclaimed Eroica Trio. Although the all-female ensemble took their name from Beethoven's Third Symphony, dubbed the Eroica, the composer will fade from the program in favor of works by the likes of Astor Piazzolla, Johannes Brahms and Franz Schubert, as well as the festival's primary namesake, Johann Sebastian Bach. They'll also be performing a virtually unknown string trio by contemporary composer Adolphus Hailstork for the first time.

"In the first movement [of the Hailstork], there is a contrapuntal feel that's reminiscent of Bach," says Eroica Trio cellist Sara Sant'Ambrogio. "It's interesting. If you took Bach and then dropped him in the 21st century and then said, 'What do you hear?' I feel like this is the sort of thing he would write. There's also a very folk-music-ish feel to it, a very jazzy feel. It's really a strong piece, and I hope we're able to get it the attention that it deserves so that it can start to make its way into the core repertoire."

Echoing Bailey's enthusiasm for the resumption of live concerts, Sant'Ambrogio says that each performance has a unique dynamic that feeds on the interplay between the musicians themselves as well as with their audience. Given that she's been playing alongside her two bandmates, pianist Erika Nickrenz and violinist Sara Parkins, since elementary school, that interplay is especially refined among the Eroica Trio.

"As a gifted performer, you can sense where the audience is getting the most pleasure, and that starts to shape how you perform the pieces for that specific audience. It will be different every night. And one of the most exciting things about going to an Eroica Trio concert is that there's an unbelievably high level of spontaneity that's happening onstage. It's like we're locked in with ESP. The pianist, she sees me tilt my head a certain way, and she'll say, 'Whoa, get your seatbelts on!' She can catch me like we're doing a high-wire act," she says.

"Our purpose, our motivation for this series was to get people back together in a safe, beautiful way. To make it like it used to be, but evolved," Bailey says. "I think people are going to be very emotional, and this is something they're going to look back on and never forget. We missed the last portion of Beethoven's birthday, so now we're finishing it off in super style." ♦

Combating childhood trauma one relationship at a time