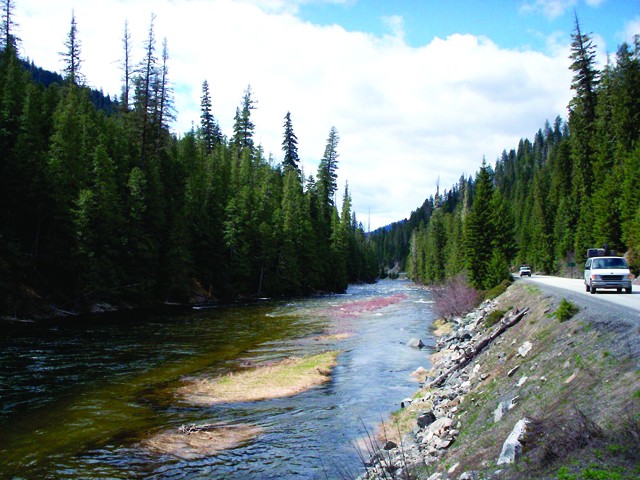 The oil industry, with the era of gushers a faded memory, is settling in to wring and wrest the very last traces of crude out of the Earth itself in places like the oil shale fields of northern Alberta, Canada.

The scope is enormous, from budgets to extraction to affected landscapes to massively outsized machinery pounding bitumen out of the ground.

It all seems so far away from rushing mountain streams such as the Lochsa and Clearwater rivers in Idaho.

But oil and water do mix, as people along those streams are just finding out. Exxon/Mobil, and its Canadian holding, Imperial Oil, have been working for at least two years to find a way to move enormous mining gear from South Korea to Alberta, looking at routes all along the Northwest coast.

As far north as Prince Rupert, they looked. And all the way down to the mouth of the Columbia River, they searched for a road that could handle loads that can reach 30 feet in height, 25 feet in width, and 100 feet in length — all groaning along on a dozen or more axles to spread the weight of more than 100 tons.

Choke points blocked one route after another — tunnels and snow sheds in the Canadian Cascades, weak bridges on other highways, low overpasses on American interstates such as I-90.

By the end of an exhaustive search, one unlikely path remained — the narrow twisting, wild and scenic Highway 12 from Lewiston up Lolo Pass.

This is about the scale and size of the equipment Exxon wants to move through the narrow, scenic canyon. [Photo: Northern Rockies Rising Tide]

Heather Berg, the Wild and Scenic Administrator for the Clearwater and Nez Perce National Forests, says she was initially dumbfounded at the prospect of 200 such behemoth loads crawling up the highway at 20 miles per hour.

“I even asked them about coming up the Mississippi or the Great Lakes,” Berg says.

But during talks over the last year and a half with representatives from Imperial Oil and Fluor Canada, Berg says the company has agreed to, and even proposed, a number of strict guidelines: paying for road improvements, burying power lines and agreeing to move up the Lochsa at night.

“If Exxon sticks to the plan, we may never see them,” Berg says.

Doral Hoff, the district maintenance engineer for the Idaho Transportation Department’s Lewiston office, says he’s meeting with Exxon people this week as the details of the move continue to evolve.

A test module for Exxon is scheduled to run the route in early fall, Hoff says. And after that, he and Imperial Oil spokesman Pius Rolheiser say, the company will meet with residents for feedback.

They are still a long way from a permit, Hoff says.

One objection contends that granting Exxon a transport permit will open the door to other large loads using the circuitous route. That door has never been shut, Hoff says.

“We’ve had wide loads through here forever, but it’s sporadic,” Hoff says. “There have been grain bins from Montana, fighter wings going to Kansas, windmill blades … some stuff, I don’t even know what it is.”

It’s the scope of Exxon’s request — 200 loads over a year or more — that grabs attention, he says. That, and the coincidental timing of Conoco moving new gear for a gasification plant in Wyoming at the end of May.

Rolheiser says Exxon is committed to easing residents’ concerns: “We want to make sure this impacts, to the least extent possible, the areas we pass through.”