The Patsy Clark Mansion was built to be 'the most impressive house west of the Mississippi.' Now it's for sale.

A conversation piece is typically a unique object that, upon a first look by a guest, inspires a story. A piece of furniture from a foreign country. A painted portrait of a long-deceased family member. An ornate wood trim.

Most homes have one or two. Some homes are seemingly constructed out of them. The Patsy Clark Mansion, located at 2208 W. Second in Spokane's Browne's Addition neighborhood, is one of those homes where every square inch seems to inspire a story: the imported "gopher wood" from Egypt; a mysterious looking chandelier with jewels representing each country from around the world at the time of construction; the "game room" where President George H.W. Bush once shared a meal with Speaker of the House Tom Foley; a Baroque ceiling painting of naked cherubs.

Among the mansions of Browne's Addition that were built at the turn of the 20th century, the Patsy Clark Mansion was easily the most extravagant. According to legend, Kirtland Cutter, the building's architect, was asked to build "the most impressive house west of the Mississippi," as detailed in a book by WSU architecture professor emeritus Henry Matthews, Kirtland Cutter: Architect in the Land of Promise.

More than a century since its construction, the building's current owners are looking to sell.

The law firm that owns and operates in the mansion, Eyman Allison Hunter Jones, P.S., has received some interest since it went up for sale in the fall, attorney John Allison says. But given the building's rich history and importance to the city, they aren't in a rush.

"We want the world to know it's available to the right people for the right reason," he says.

AN ARCHITECT ON THE FRONTIER

The story of the mansion on Second Avenue begins shortly after the city of "Spokane Falls" was established in the late 1800s.

In 1886, a banker invited his young nephew, a student of art and architecture, to begin his career in the fledgling frontier town.

Kirtland Cutter arrived in Spokane in 1887 in his late 20s and over the course of four decades would help reimagine the railroad town into a modern American city worthy of architectural praise. Starting with the aftermath of the Great Fire (1889) and through the city's boom years, Cutter designed and spearheaded the construction of dozens of buildings for residents and business throughout Spokane, as well as in Idaho, Montana, Seattle and, later in his career, California.

"Like many of his American contemporaries in that era of ambition and enterprise, Cutter exploited an astonishing range of styles and types, drawn from diverse sources and freely adapted to meet new expectations and changing patterns of life," Matthews writes, "The product of a career that stretched from the Gilded Age to the Great Depression, Cutter's architecture provides a record and interpretation of society at two major turning points in American history."

A few years before Cutter arrived in Spokane, an Irish immigrant-turned-industrialist had established himself as a major player of one of the biggest attractions in the Western territories: mining.

Patsy Clark emigrated to America in 1870 at the age of 20 and quickly went off to work in the gold mines of California, according to Matthews' history. He advanced through the ranks of the mining industry, taking on roles as superintendent and foreman, and by the age of 30 was managing Montana's Moulton Mine and, later, Anaconda Mine. From Montana, he established his family in Spokane and invested in mining operations in Washington and Idaho.

Clark commissioned Cutter to construct a home for his family in Browne's Addition in 1897 "without any budget restrictions," Matthews writes.

"The design of a mansion for such a man was a challenging opportunity for the architect. We do not know what specific demands Clark made on him, but Cutter decided to work in an opulent eclectic style, drawing inspiration from Islamic architecture."

"It appears that Clark wanted to build a residence that stood out from all the others in Browne's Addition. But he can hardly have envisioned the striking originality of Cutter's design," Matthews writes.

"One of Cutter's sources for the unique Clark mansion appears to have been the Ponce de Leon Hotel at St. Augustine, Florida, built between 1885 and 1887. The Ponce de Leon, which was intended to celebrate the Hispanic colonization of Florida, was loosely based on the Renaissance architecture of Spain and subtly evoked the Moorish influence there.

"What it derived from the palaces of Islamic Spain and from the Ponce de Leon Hotel was a mood rather than specific structural forms of ornament."

In his introduction to the book, Matthews writes that, among the many homes that Cutter built, Clark's mansion expressed "not only the wealth and status of its owner but also the architect's fantasy on the potential of wealth." 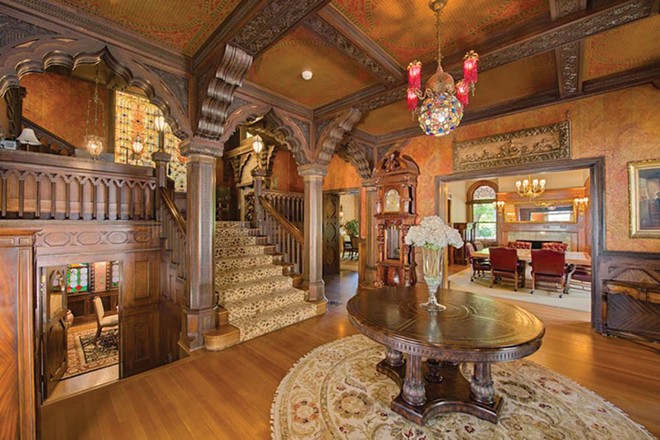 The building has undergone some big changes in the last century, though.

Patsy Clark's family sold the building in the early '40s, says Allison, whose office is inside the building, and it changed ownership a handful of times up until the '80s when it famously served as a high-end restaurant (simply known as Patsy Clark's Restaurant).

The building had fallen into a state of disrepair by the time the law firm took it over in 2002, Allison says. Reconstruction on the mezzanine level and on some of the floors and roof took about a year to complete, among other items, he says.

"We paid about $1.03 million. We probably put about that much into it."

But they aren't trying to "flip" the old home, he says.

"We were told by plenty of people that this was not the kind of investment someone would make if they were being completely logical and using a calculator," Allison says. "This was an investment of love in a cultural icon in the community. We feel like we have preserved it and we have set it up to last for another 100 years."