A tiny-sized village in a medium-sized city. 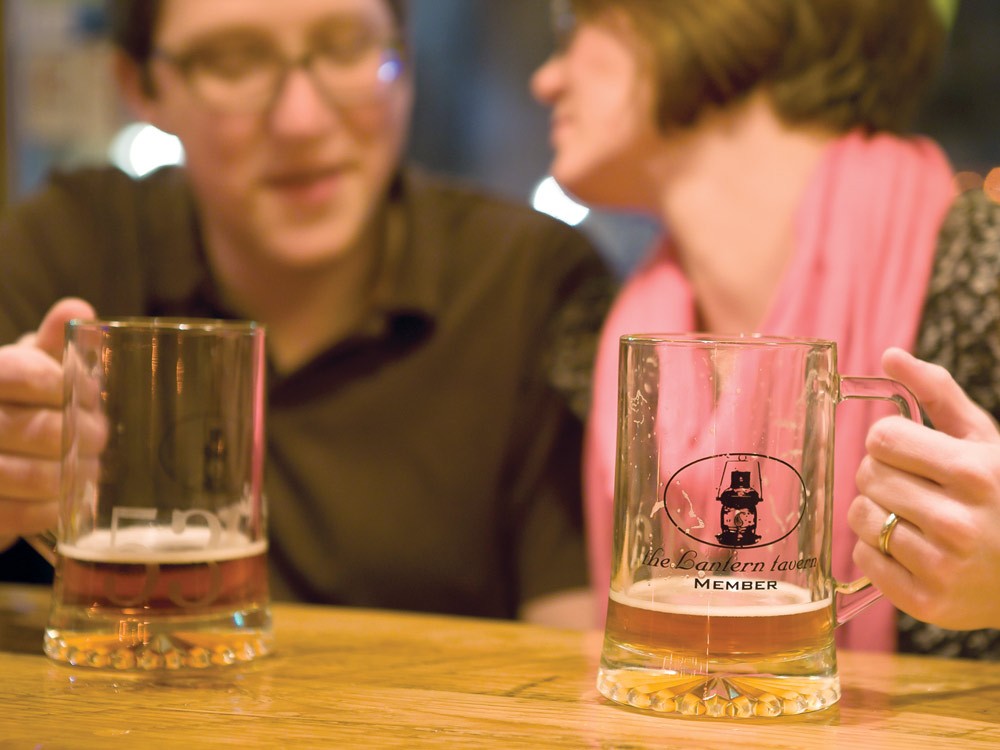 Stephen Schlange
Watch your elbows at the Lantern Tavern.

It’s an old cliché to say “things move slower here,” but in Perry it’s literal. Specifically, it’s literal for the cars, briefly interrupted in their blitz from the South Hill to downtown by Perry’s 20-mph speed sign.

In Perry, the nightlife isn’t one of thumping nightclubs and bar-hopping sprees — it’s the nightlife of lazy summer evenings, meandering walks, long sips of wine. Nightlife in Perry is about the Shop projecting classic flicks on a nearby wall at dusk, about laughter coming from a few building downs, at the Lantern, and the smell of South Perry Pizza pepperoni wafting from across the street.

The Perry Street Café (1002 S. Perry St.) has only been open a little over five years, but it feels, intentionally, like a capsule from the days of milkmen and Sunday drives, a café brandishing ’50s-style advertisements bragging about their famous cinnamon rolls. Two regular customers have placed their hand-crafted elaborate sculpture of a winter ski resort — made entirely with edible materials — on display in an alcove. It’s just the type of thing they like to do, Perry Street Café owner Geoff White says.

This entire neighborhood, he says, is a Norman Rockwell painting. It’s Mayberry from The Andy Griffith Show.

“You expect Aunt Bee to come through the door and say, “Bake these pies,” White says. With that, he launches into whistling the iconic Andy Griffith theme.

The throwback café and quaint lampposts are right next to the massive HiCo Market (817 S. Perry St) convenience store, hip-hop thumping over the intercom system, out-of-order laundry machines crammed in the back, and nearly the entire sprawling perimeter lined with beer.

Perry is a place caught between East Central’s poverty and the South Hill’s wealth, where hopes for a thriving, more upscale neighborhood clash with concerns about the impact of gentrification.

But on Friday evening, it’s South Perry Pizza (1011 S. Perry St.) that’s the most packed, with ovens roaring. Most order the house pizza: pepperoni, sausage, mushrooms and the signature caramelized onions. During the summer, the big garage door rolls up, letting the cool evening air mix with the heat from the pizza ovens.

“Half the people are regulars,” waiter Matt Mitchell says, pointing at the crowd gathered.

The bar across the street is packed, too, but it doesn’t take many. The Lantern Tavern (1004 S. Perry St.) — one of those trendy bars without a sign — may be the tiniest bar in Spokane, a thin strip of storefront with maybe 12 seats. (The bathrooms, oddly, are larger than the main area.) A quick question about the bar’s unique points brings a chorus of praise from the crammed-in patrons, shouting out what they love about Perry’s only bar: the beer-selection, the community, the family-like atmosphere.

The bar is practically a youth group. They point to a flyer on the wall. The Lantern’s regulars go on “field trips” monthly. This time, they’re playing laser tag. A mention of The Inlander sparks a lengthy, loud debate between patrons about the difference between “discretely” and “discreetly” — and whether The Inlander’s crossword got it wrong.

Just a few years ago, Perry didn’t have nightlife at all. But business by business, that’s changing. As the transformation of the neighborhood continues, Perry is slowly growing the ability to entertain in the evening hours, ready to shift from “quaint” to “thriving.”

The Odyssey Youth Center (1121 S. Perry ST.) has a couch. It has a Wii. And it has all sorts of programs and support for young gay teens. It’s usually open until 8 or 9 pm — depending on age — making it an ideal spot for kids to just get away and relax for an evening.

Deb Green and Megan Van Stone, the mother-and-daughter team behind downtown’s Madeleine’s Café and Patisserie, are anticipating a May opening for Casper Fry Public House and Eatery (928 S. Perry St.), which will inhabit the old Altamont pharmacy next to the Shop. Expect a laidback, upscale pub feel, with a full bar, and a smoking oven churning out Southern-inspired cuisine.