Pitch Perfect 3 forgets why anyone liked the first two movies 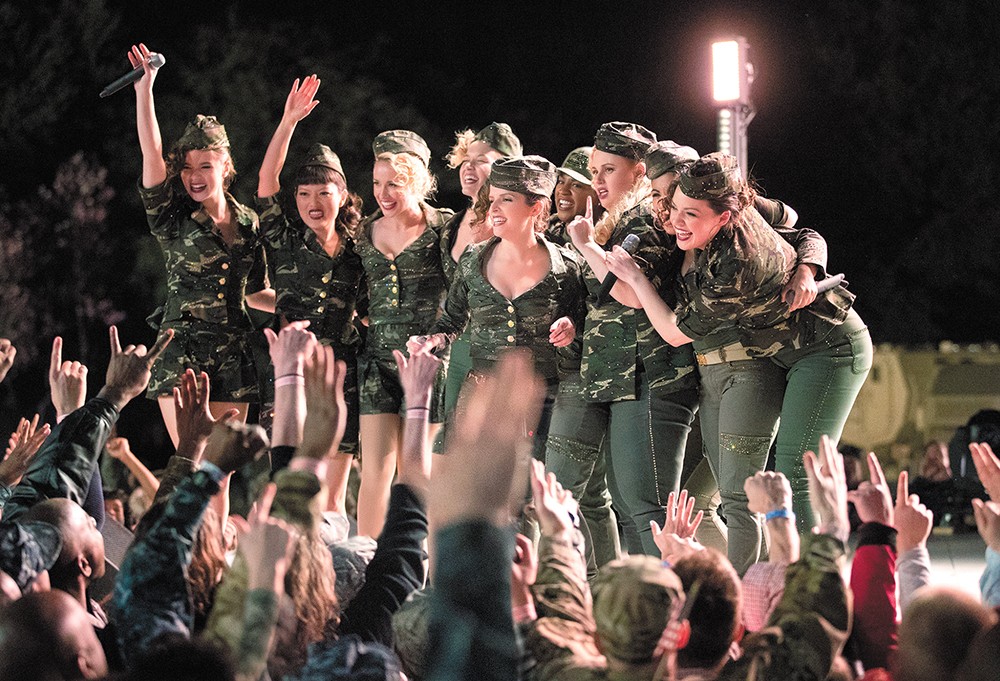 Pitch Perfect 3, the third entry in the comedy series

about the young women of a competitive university a cappella singing group, opens with them belting out a massive rendition of Britney Spears' "Toxic" on a yacht off the south of France, and then leaping off the boat in slo-mo while it explodes.

This is really rather remarkable: I don't think I've ever seen a movie jump the shark — or the exploding yacht — in its opening scene.

Even more remarkable, the movie then flashes back to "three weeks earlier," at which point the hapless viewer realizes that the movie is going to attempt a justification for how a bunch of music dorks could ever find themselves in the midst of a James Bond scenario. It's almost unbelievably appalling how Pitch Perfect 3 tosses out what made the previous two films just barely acceptable, which would be the a cappella singing among rival groups attempting to outdo their opponents.

The music in the first two was pretty toe-tappingly entertaining, and they harkened back to silly musicals the likes of which we don't see much of anymore, even if they were problematic in their depictions of women. This was especially concerning given that the films were about women and written by a woman (Kay Cannon, who returns as screenwriter here). Still, how can you not love "organized nerd singing," as the first movie called it, or Anna Kendrick, who is an unappreciated goddess of comedy and music?

Remember how the first movie was actually inspired by a nonfiction book about college a cappella? The spy-thriller opening sequence serves only to highlight how much more realistic 007 is than what happens here. This time out, the Barden Bellas reunite from their crappy 20-something post-university existences of dead-end jobs to do a USO tour in Europe, into which is shoehorned a competition that has nothing to do with a cappella and in which the other contestants are bands. You know, like with musical instruments and everything.

There's very little a cappella, and not even much in the way of competition; we don't even get performances from the other bands, which are limp pastiches of an all-girl rock band, a country-rock band and a hip-hop group. "Pastiche" may be giving the film too much credit, though: The bands are nondescript, the musicians non-entities. The subplot that culminates on the exploding yacht is even further removed from all this to the degree that it feels like it's been imported from a completely different movie, one that is (if possible) even cheaper and cheesier.

So what else is there? A lot of women disparaging other women and themselves, including a helluva lot of infantilization of talented actresses who are in their 30s, forced to enact pajama parties and childish daddy issues. Rebel Wilson's "Fat" Amy is treated atrociously here, from her constant stream of self-hating fat jokes to how the script treats her sexuality and her interest in men as something laughable and disgusting. I won't even go into how John Lithgow embarrasses himself as Amy's father, complete with an awful Australian accent.

There's a reek of desperation to Pitch Perfect 3, a flailing attempt to recreate the success of the earlier movies without appreciating what made them work. Screenwriter Cannon falls back on her TV-sitcom background with multiple slapstick action sequences that are shockingly out of place here. Director Trish Sie (Step Up All In) is incredible at crafting compulsively watchable music videos, but there is no life in anything here that isn't the very occasional musical number.

Even the Bellas' rendition of George Michael's "Freedom" in the finale looks good only by comparison with the 90 minutes of nearly unwatchable junk that has come before. ♦

Pitch Perfect 3 is not showing in any theaters in the area.