How we put together this poetry issue 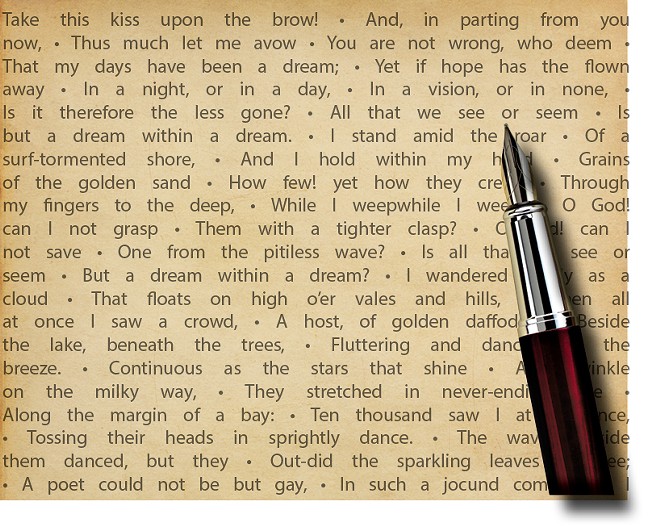 When Inlander Editor Jacob Fries asked me to put this section together, I had a pretty good idea how I might go about doing so. After serving as poet laureate for two years, and putting together Railtown Almanac, I have a good sense of who the poets in town are. I even suggested that we consider an open call, to see if we might get one or two surprises.

Six weeks later, I've read more than 500 poems from 264 writers, ranging in age, based on cover letters, from 5 to 90. As the submissions piled up, I began to find Jacob's original idea to publish 10 poems hilarious. I'm not much for math, but that's around 2 percent of the poems received. But here we are. And as was true when we published Railtown, I'm blown away by the depth and breadth of the poets in the Inland Northwest.

In selecting a dozen poems, I had to make some decisions. One of the chief joys of being an editor is in finding new talent, and that became one of my criteria, especially considering the new audience that the Inlander's readership represents. Who have they heard of? What will they find compelling? So I didn't include any of the most established poets in the area. Are Christopher Howell, Nance Van Winckel and Ellen Welcker among the best writers in the area? Of course they are, and you should run out to Auntie's and buy their books. They'll knock you over. They are brilliant writers, as are many others not appearing in this issue.

But maybe you aren't as familiar with the beautiful work of Kathryn Smith or Joe Wilkins. Maybe you haven't been to the Spokane Poetry Slam or Broken Mic (Why not, by the way? Go to those things!) and so haven't heard the work of Mark Anderson, James Decay or Fitz. Maybe you know Brooke Matson only as the extraordinary leader of Spark Central. Maybe, like me, you've never read the work of Saj Ravasia or Pat Cason before. I hope you will now.

Still, it was not easy to get down to 12 poems, in part because it meant rejecting 98 percent of the work that had been sent to me in hope, in earnest, joy, and sorrow, and everything in between. The work I read was remarkable, and demonstrates the deep pool of emotion and talent spread throughout the region, like our poetry is another aquifer, running just under the surface, and sustaining us, even as we sometimes forget that it is there. Thanks to everyone who sent something in; you confirmed what I already knew, which is that Spokane is just about the best place a poet can live. And thanks to Jacob and the Inlander, for supporting and promoting this amazing community. ♦

Thom Caraway, the editor of this section, was Spokane's first-ever poet laureate.

Latest in The Poetry Issue

Ode to a Pomegranate

What Spoils in the Sun

What I'm looking forward to