The Power of Three

Is a triathlon in your future? Squeezing in time for training is all in a day's work for KXLY's Melissa Luck 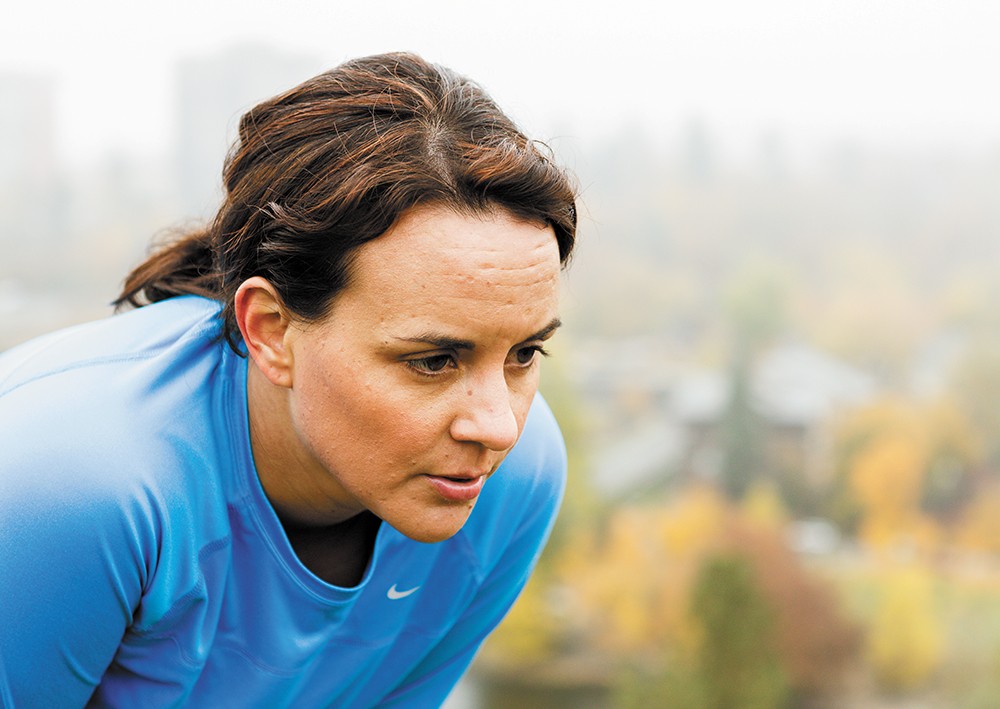 Stephen Schlange
"If I can do it, anyone can," says Melissa Luck.

As Melissa Luck vigorously pumped her tan legs and crossed the finish line, her husband was waiting to congratulate her. Her mind went back through the past six months of carving out time for workouts while caring for two sons under 5 and juggling opposite work schedules. Seeing him there, she broke down crying, emotion coming over her in waves.

Luck had just completed her first sprint triathlon. Even though she had exhausted every last ounce of energy swimming a third of a mile, biking 12 miles and running three, she couldn't wait for the next race.

Walking the Centennial Trail on a brisk autumn afternoon, it's clear that Luck, clad in black spandex, is in motion at all times — even if, as she says, she sometimes moves slowly.

"If people were to look up my time they'd probably think I walked the whole thing," Luck says. "But I'm not out there to be the quickest, I'm out there to push myself."

The goals were set last January. Though Luck says she always hated running, the KXLY executive producer (her husband is KXLY morning anchor Derek Deis) decided to bite the bullet and sign up for a Couch to 5K class with Fleet Feet Sports Spokane. She says the program was instrumental in showing her that everyone starts somewhere.

"If I just started running by myself, I would have quit," explained Luck, who has since lost 25 pounds.

She says she preferred the group setting to keep her accountable, but that there are many programs online that people can do on their own. After completing the class, the next logical step to tackle was a triathlon.

Though she had lived in Spokane for 11 years, she'd never set foot on the Centennial Trail. Now she jogs there regularly. "I've never gotten to the point where I've experienced a 'runner's high,'" she says. "But I pop in my earphones, put on my old-school hip-hop mix and lose myself in the moment. I keep running because I feel better when I do." And she values the improved lung capacity it gives her for the swimming and biking portions of the race.

When it comes to varying workouts, Luck keeps it simple: three times a week at one-hour intervals. This allows for wiggle room, depending on what her weekly family or work schedule throws at her.

"As long as you make exercise part of the routine, but keep it flexible, you won't have to sacrifice other things for it," Luck says.

She was comfortable with the swimming component of the competition; it was the biking she had to familiarize herself with. While you can use any sort of bike for a race, a road bike is preferred.

"Riding a friend's road bike for the first time was probably the scariest part of training," she recalls. "But once you start riding one, you'll never want to get off."

Luck had grown up playing softball and swimming and is currently part of a rowing team, but never imagined triathlons would be something she'd enjoy. After competing in Liberty Lake's Valley Girl Triathlon and West Plains WunderWoman Triathlon, she's signed up for more.

"It depends on the day — some days I really have to force myself to do this," she says. "But having the goal of that next triathlon keeps me on track."

When it comes to cost, Luck insists you can participate cheaply — citing a swimsuit and running shoes as the only items necessary to buy — "the bike you can borrow." A local triathlon entry is going to cost nearly $100, but she says it's money well spent: "Otherwise you may not be motivated to stick with it." And, she adds, there are ways of getting help with the entry fees if needed.

But what keeps Luck wanting to come back to these events is the camaraderie among the women who compete.

"No one says, 'Oh, it's so cute you came'... It's a very positive experience. Everyone wants to help each other out."

And then there's the bling. Finishers, no matter how they place, get hardware. "I know I'll never win, but it feels pretty much the same as the Olympics — you get a medal and everything." ♦