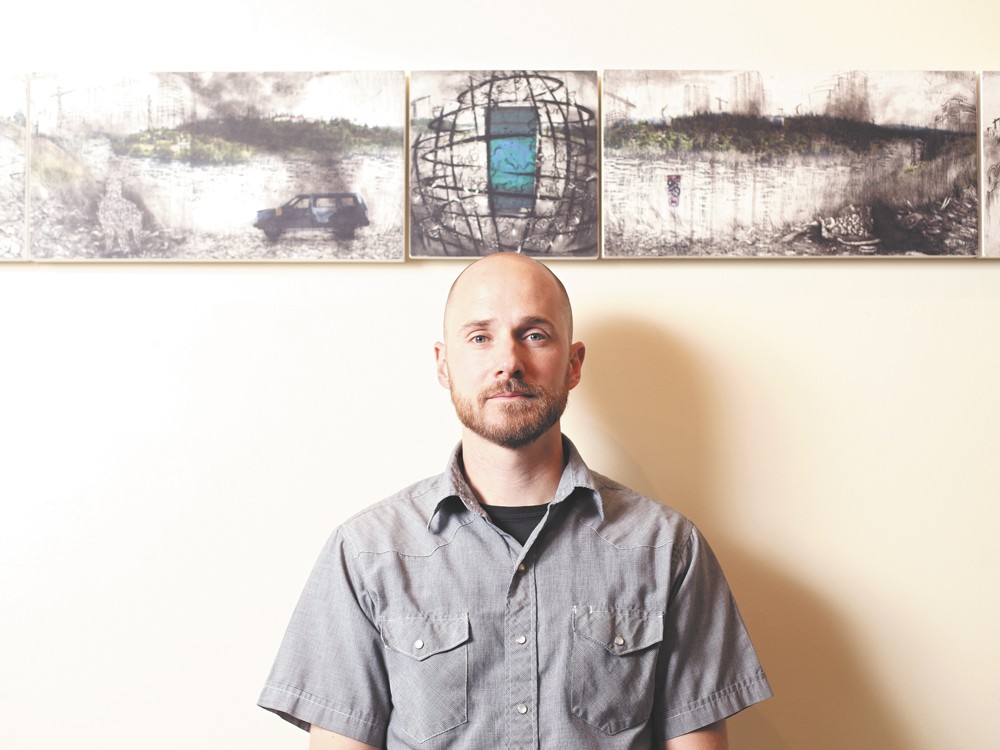 Young Kwak
Scott Kolbo: “There’s more opportunity to just try stuff out here and see how it goes.”
Over the past 12 years, Scott Kolbo has never shown fear.

The Spokane visual artist, member of Saranac Art Projects and Whitworth art professor has earned a reputation for being vocal about the local arts scene, for encouraging critique and always urging artists to be professional. Even in his most recent show — a collaborative show with Lance Sinnema called “Escalation” — Kolbo brought an air of professionalism to a show that, at its heart, revolved around drawings of two men literally stamping each other with insults.

Kolbo recently announced that he has accepted a staff position with Seattle Pacific University and will be leaving Spokane to get back to the west side, where he grew up. He assures us he’s not fleeing Spokane — that his time here has been well spent and that he has nothing but respect for Spokane’s artists.

We got on the phone with Kolbo to ask what he has learned from Spokane’s art scene and what he predicts will happen here in the years to come.

INLANDER: So you’re leaving us…

KOLBO: Yeah … I’m really excited about a new adventure — a change of pace. I really enjoyed my job at Whitworth a lot. It seemed like a good time to make a transition. And I think the art world over there is going to be a little bit bigger and more challenging than Spokane.

What have you learned in your time here and from being so involved in Spokane’s art scene?

I’ve learned how to do a lot of things that I wouldn’t have known how to do. There’s more opportunity to just try stuff out here and just see how it goes. I did a lot of things I’m not qualified to do — like being a part of a co-op gallery, putting on exhibits in empty storefronts, shepherding along a giant art building at the university I work at. … The risk is easier to make here because the stakes are a little bit lower.

In your opinion, what do you think the most major issue facing Spokane’s art scene is?

No one buys [art] here. And so I think that one of the challenges is that the patronage base in Spokane is pretty small for people who care about high-quality contemporary art. At a certain point, you run out of bandwidth.

Since we are a place where you can do interesting things, people are less interested in being professionals. There’s a lot of half-hearted work that gets put up … I think a lot of people who could be doing good work aren’t pushing themselves.

What cities are doing it right?

I lived in Madison, Wisc. It’s got a huge university… it’s not that much bigger than Spokane. It’s got a more professionalized art world. I was actually in Walla Walla in the fall, and they have a really interesting art scene going on down there. I think a lot of it has to do with the wine money down there.

But we’ve got universities here… I think you can’t really overestimate the effect that proximity has. Eastern is way out there, Whitworth is on the far edge. And you really only have Gonzaga that’s close to the city center. There isn’t a lot of mixing of people from there. I think that has something to do with it… Now, if all four universities had downtown campuses…

Do you think the University District could have some affect on the arts scene?

Well, they aren’t going to put any of the art departments down there. I think it’s a big deal when there are four different student art shows are opening and those students can walk to each others’ exhibits and critique each others’ work.

Critique is always something you’ve pushed.

I don’t know how you ever get any better if you’re not really hard on yourself. So if you’re not seeking out hard — maybe even discouraging — kinds of critique where you’re really being challenged … it’s just going to take you a long time to grow. I think you really have to want it, and you have to want it from people who you don’t necessarily even like or even agree with. My experience? There is just no critique in Spokane.

On your way out, what are your predictions for Spokane’s art scene?

I think that most of the energy and activity and excitement is around the Terrain events. I see more poetry slam art shows and Terrain kind of events, being the way that things go. There just aren’t enough dedicated art spaces to do anything else. Fun art parties will pop up.

I think our art institutions are going to crash pretty hard — it’s pretty easy to see. You’ve go the [Museum of Arts and Culture] and its spiral. And you have the City Arts Commission — that’s not going to be around for a long time. … I think the universities will keep doing their jobs to bring in more challenging work to help their students. My hope would be that the universities are able to do even more outreach in the community.

I feel like Terrain is fantastic and I’ve always really supported it. To me it’s what the city really needed: to get emerging kinds of artists excited and really integrated. I feel like the danger may be that there’s a lot of selfsatisfaction. The art isn’t high quality. I haven’t seen the artwork getting better at Terrain. I think that is the danger. It’s a great time and you have a lot of fun, but nobody does much work until a month before...

When I got into Spokane there was a pretty big upswing and things were going well, and then we saw it crash. … I hope it will build up again in the next decade. It’s a little easier to leave, though. I’m missing out on a lot of drama and extra stress. It’s been a pretty rough year.