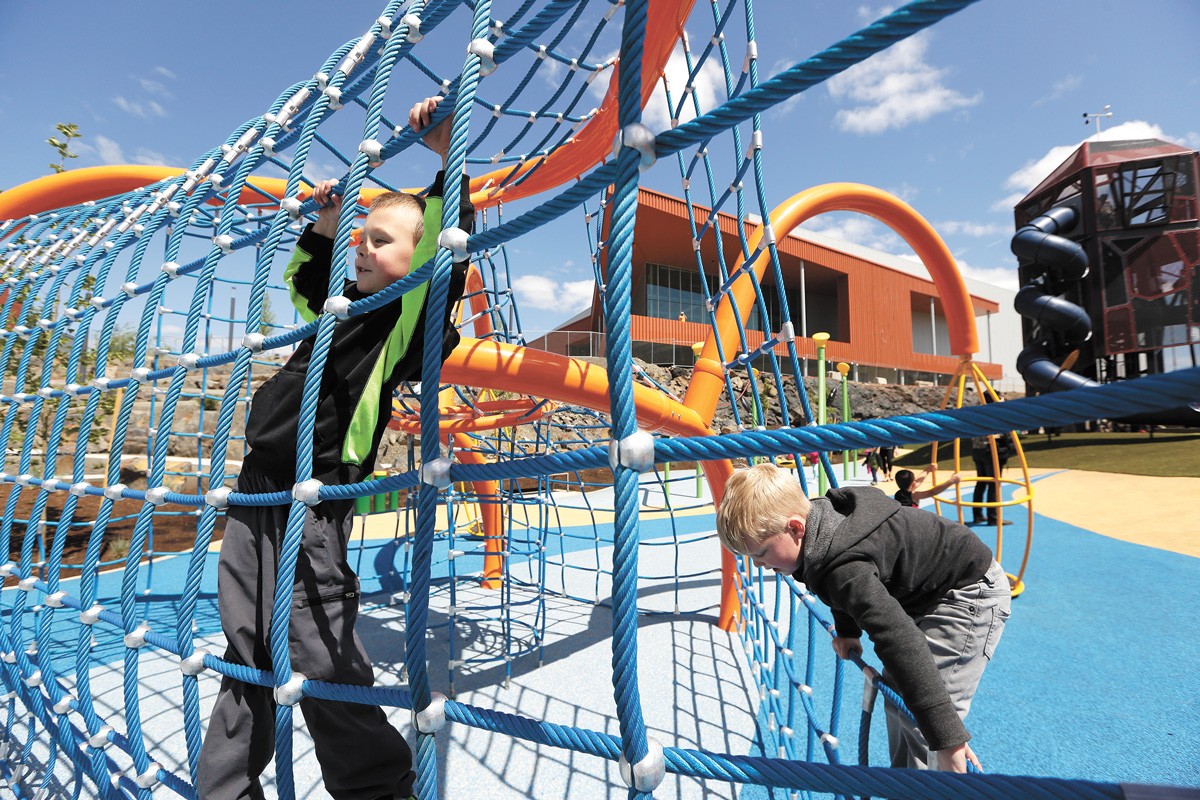 If you visit the Spokane River Falls about now, with the spring runoff creating its roar, throwing mist off the basalt cliffs, you can feel the entire history of this place. Falling water creates great fishing, which is why local tribes gathered in the vicinity for generations. It can also power a mill, which is why pioneers settled here. Later, and continuing to this day, it powers the electricity that helps run our city.

But go back even further, millions of years into the past, when massive flows of lava bubbled out of the earth and covered tens of thousands of square miles in the unforgiving black rock we call basalt. You can see it everywhere you look, all along the river's gorge, then up along the edges of the South Hill and North Side, defining our city center.

As you watch the flow of water today, think bigger — much, much bigger. Imagine if all the rivers in the world were flowing through there at once. Then multiply that by 10. That's the cataclysm that hit this region multiple times between 12,000 and 18,000 years ago, as the Ice Age waned and ice dams in North Idaho built up and then failed again and again, carving out the landscapes we now live in, from Grand Coulee to the Pothole Lakes to the Spokane River Gorge.

That's some pretty dramatic history, and as of Friday, with the grand opening of the new amenities on the North Bank of Riverfront Park, it's immortalized in one of the greatest kid zones in all the Pacific Northwest — the Ice Age Floods Playground. And there's more: a Hooptown basketball complex, a skate park, heck, you might even spot a rogue, 1970s-era dinosaur bone.

But if pondering all that geology makes you a little sleepy, that's OK — the playground has some epic slides to check out, too. 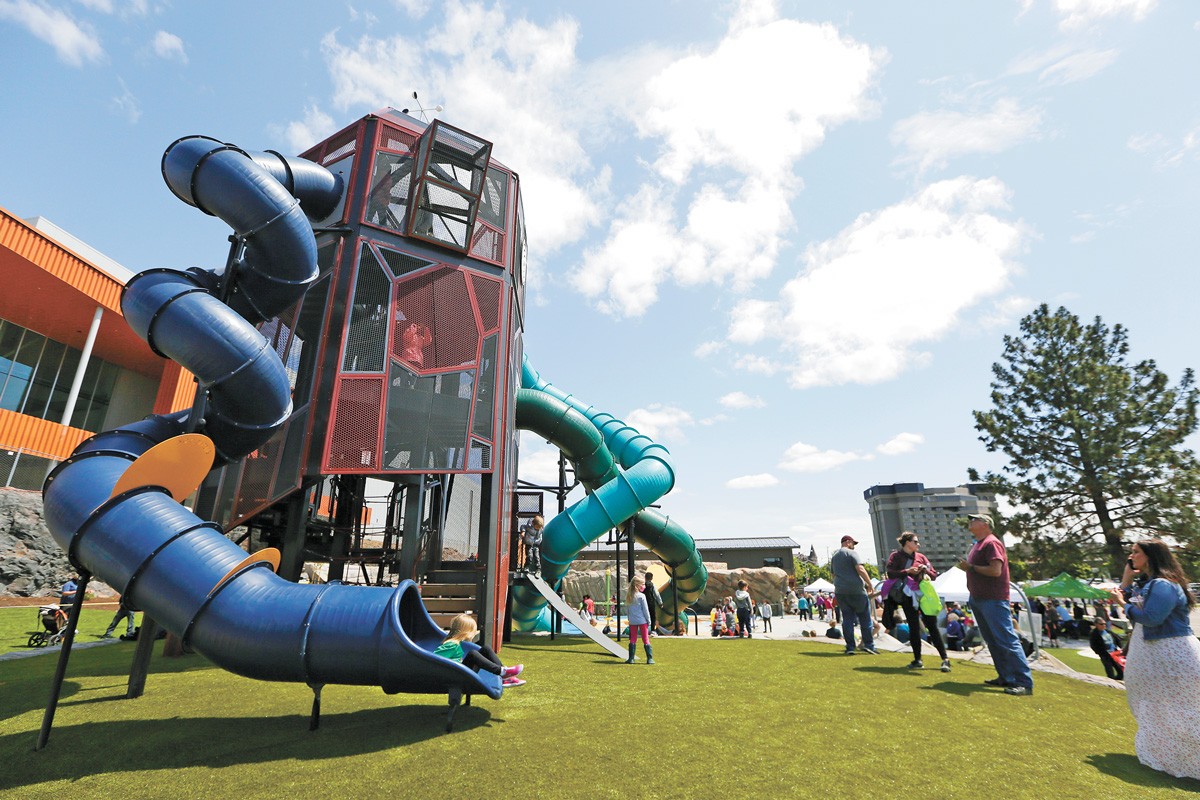 As the Riverfront Spokane redevelopment project reaches completion, there's recent history to consider as well. Go back to the 1960s, when the only cataclysm on locals' minds was whether downtown Spokane was going to dry up and blow away. City leaders brought in a visionary urban planner from California, King Cole, and together they settled on an audacious moonshot solution. "C'mon, gang, let's throw a World's Fair!"

As we all know, they did just that, hosting Expo '74 along the river, with hundreds of thousands coming to visit. They embraced the ecology theme by at least starting not to view the Spokane River as a big, handy sewer. Another lasting legacy was leaders like Jim Cowles convincing the railroads to clean up their tangled mess of tracks and relocate it all to the viaduct where it runs today. In the process, they revealed the Spokane River for the first time in half a century. People started falling in love with it.

The physical space of Riverfront Park was left behind after the World's Fair, but they also left a challenge for future generations to live up to. Let's admit it, we kind of sucked at that for like 30 years, with no vision or investments into our most important public space and the river that runs through it. But recently local governments have taken that ecological cue, and the Spokane River has been significantly cleaned up. And in 2014, Spokane citizens voted to spend real money on preserving Riverfront Park. Now, after years of planning and construction, you can see the results, from the lit-up lantern of a Pavilion to the beautiful new stable for Charles Looff's horses. Our communal living room has never looked better.

Riverfront Park is a symbol of so much: Our history, our local character — prickly as a Ponderosa pine cone, perhaps, yet sturdy as a column of basalt — and our future. In a time when we can't agree on much of anything, renovating the park is an investment in our lives together. It's a statement of shared purpose. It tells the world — and our children — who we are as a community, what we care about. And it's a confidence builder for a city and region that is only just getting used to the idea that, actually, we're pretty damn cool. Build one of the best parks on the West Coast? Yeah, we can do that.

Even if you view it strictly through a cost-benefit analysis, it's already pumping out big dividends. There's the world-class Podium athletic center, looming above the site on Spokane Parks land, steadily nearing completion. Next up: The new high school football and soccer stadium. All these decades later, King Cole's Expo gambit is still paying off. Buildings are being renovated around the park's perimeter, with new ones — towers, even — in the planning stages. People are looking to move here, young people are staying put, and we're seeing our name on those quality-of-life lists we used to dismiss because it was always Boise, Boise, Boise. Kendall Yards keeps on growing, and one of Seattle's top restaurateurs decided to join our already great dining scene in a space right across from, you guessed it, Riverfront Park.

Everybody pitching in a few bucks on a park bond to reach for a brighter future? Yeah, it's penciling out.

So when you stop by the new Riverfront Spokane, be sure to take in the mighty Spokane River Falls. Feel the raw power of that water pounding across those basalt walls, shaping this place and all who live here as time marches on. ♦

Ted S. McGregor is the publisher of the Inlander. From 2013-20 he served as a community volunteer planning the park renovations and later as a member of the Spokane Park Board.

The original print version of this article was headlined "Beyond Basalt"