Images from the Election Night parties. Plus, dispatches from the night. 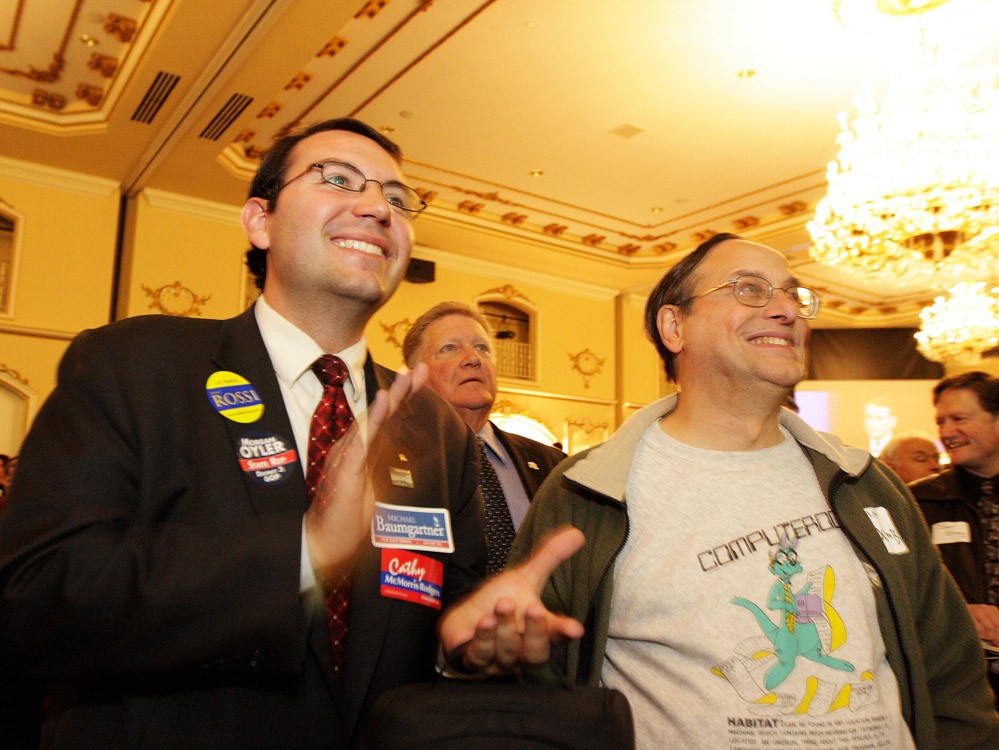 Idaho With polls closed from coast to coast, media outlets from Fox News to NPR are ceding control of the House of Representatives to the GOP.

The New York Times has the Republicans gaining 53 seats (they needed 39 to win control) — and with 217 total, one shy of the majority — by 9:40 pm Pacific time.

In Idaho’s 1st Congressional District incumbent Walt Minnick, the rare Democrat to ever win the seat, was trailing GOP newcomer Raul Labrador by eight percentage points, 51-41, trailing by about 5,000 votes with 228 of 961 precincts counted according to the Idaho Secretary of State website.

“It’s too early in the evening. I can’t really tell at this point,” Minnick says in a telephone interview from the Owyhee Plaza in Boise, where he was visiting with other Democrats.

“Down here a lot of the early votes come from Canyon County, which is pretty heavily Republican,” he says.

Should Minnick rally to retain his seat, his name is already being placed on lists of Democrats that the GOP would like to “turn.”

Would he switch parties?

“No. That is not something I would do … to be even more declarative about it,” Minnick says. “I am a fiscal conservative and a social moderate and that makes me fit better into the conservative wing of the Democratic Party.”

With the House going GOP and the Senate and White House remaining in Democrats’ control, Minnick says more might be accomplished than in the last two years of the 111th Congress.

“The parties have to work together, and that was missing in the last Congress.”

In statewide results, Idaho Gov. Butch Otter handily defeated Democratic newcomer Keith Allred 62-30, and was declared the winner of a second term even before the polls closed.

The independent candidate who changed his name to Pro-Life, garnered 641 votes. Pro-Life, in the final gubernatorial debates last week, became an audience favorite for exchanging fist-bumps with Otter, who was standing next to him.

The candidates were discussing some of the tangled state versus federal issues surrounding gray wolves when Pro-Life said, "Well, if the wolves were eating children, then I would do something. But otherwise, I wouldn't."

The audience roared with laughter and Otter exclaimed, "Well OK, I'll go with that." The two then bumped fists. (Posted by Kevin Taylor at 9:19 pm on 11/2)

Spokane County Results Are In

Spokane County has released its batch of votes for the night. So far, they've counted over 65,000 ballots, with 110,000 remaining. Here are the highlights so far:

* Spokane County so far has voted for Dino Rossi over Patty Murray, by a count of 57 percent to 43 percent.

* The county has favored Cathy McMorris Rodgers to Daryl Romeyn by a margin of 20 points.

* It's a different story in the 6th District, where Republican Michael Baumgartner leads state Sen. Chris Marr 60-40, and former Republican state senator John Ahern is leading John Driscoll, the Democrat to whom he ceded his seat in the last election, by about 22 points.

* Vicki Horton is leading her boss, Ralph Baker, in the race for Spokane County Assessor, 57-43.

Prop 1: Authorizing the creation of a Children's Investment Fund to combat dropout rates

Results are in from Grant and Franklin counties in central Washington, as well as Pacific, Lewis, Kitsap and Island counties on the west side.

More as the counties continue to report.

Things Are Starting to Look Red

Polls having already begun reporting along the East Coast and a big swath of the Midwest, the nation is beginning to look mighty red, with CNN projecting that Republicans will claim a majority in the House of Representatives. Among the Republican victors so far are two U.S. candidates: Kentucky's Rand Paul and Florida's Marc Rubio.

As of press time, Democrats had also won four gubernatorial races, but Republicans took governor's mansions throughout the Midwest, as well as in Michigan, Tennessee and Alabama -- eight states in all.