Prince Avalanche is about relationships and yellow road marks 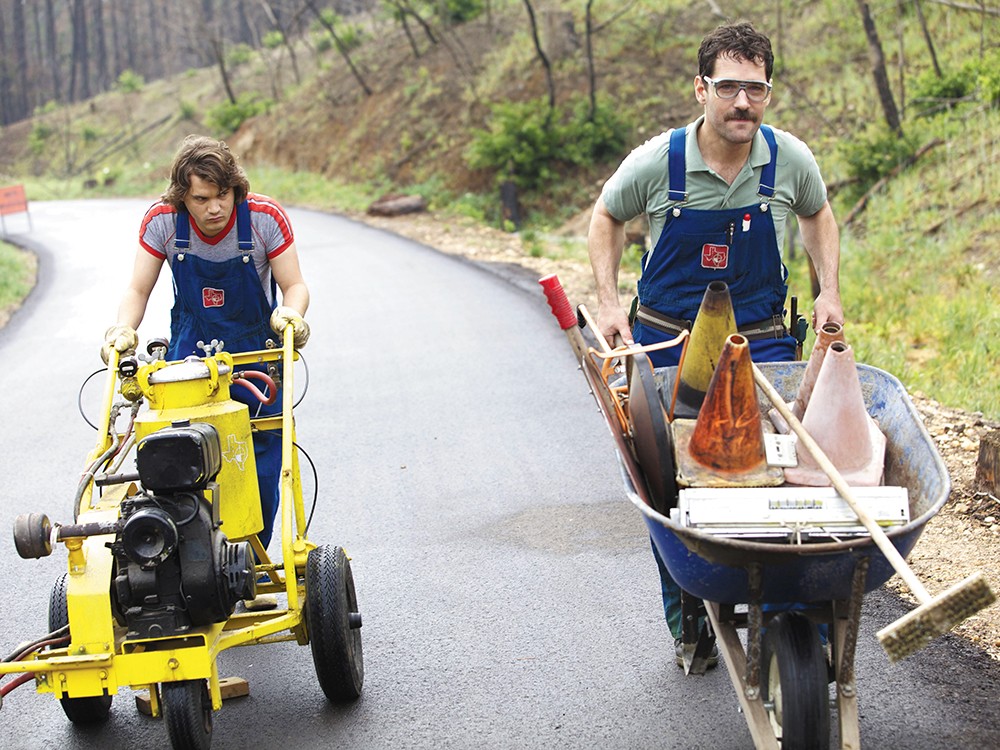 The joys of work.

Sometimes the simplest stories are the best. Stake out an ideal location and two top-flight actors, add a screenplay loosely adapted from obscure Icelandic comedy Either Way, mix with the contributions of a dependable crew and postproduction participants, and voilà: Prince Avalanche. David Gordon Green’s latest film has the amusing buoyancy of a lark but the existential depth of a head-scratcher. The film entertains, puzzles, and strays outside the lines.

Those lines are a none-too-subtle metaphor for the goings-on in Prince Avalanche. Essentially a two-hander, the film follows the experiences of a couple of guys isolated out in the woods, whose job it is to paint the yellow lines on the asphalt road that winds through the wilderness and pound mile markers into the roadside along the way. Alvin (Paul Rudd) and Lance (Emile Hirsch) are a mismatched pair, and all the fun, tension and resolution of the film derives from their incongruence.

Alvin is a pedantic fuddy-duddy who has chosen this job in the backwoods in order to have time to himself to ponder life and love. He writes long letters to his off-screen girlfriend Madison, which expound on his love for her while keeping her at arm’s length. Lance is Madison’s dopey teenage brother whom Alvin has hired as his assistant for the summer. Lance hates the isolation and wants nothing more than the chance to go to town and get his “little man squeezed.” Alvin, in his pomposity, wonders if Lance is learning-impaired.

Making these characters all the more enjoyable is the fact that both Rudd and Hirsch are playing against type: Rudd plays the straight man to Hirsch’s goofball. Not that there isn’t a comic quality to Alvin’s fussiness, but Rudd’s portrayal is buttoned-down, and the comedy comes through in his demeanor and appearance. (The innocuous little hip shake he performs while casting for fish left me in stitches.) Meanwhile, Prince Avalanche (like his turn in Killer Joe) gives Hirsch a break from the cerebral millennials he so often is invited to play.

Filming in the burnt-out woodlands of Bastrop, Texas (devastated by the wildfires of 2011), proves to have been an inspired choice. The charred setting provides a haunting backdrop, and Green (based in nearby Austin) shows great acumen for recognizing the atmospheric potential of this unsettling natural disaster, as well as setting the film in the pre-electronic era of 1988 instead of the present day. Lance and Alvin really are at their own ground zero, and the elegiac setting also allows Green the opportunity to include a local character who may or may not be a ghost. The evocative soundtrack by Explosions in the Sky and longtime Green collaborator David Wingo is another salient contribution to the film, as is the rich cinematography by another Green regular, Tim Orr. Prince Avalanche finally unites Green’s seemingly disparate tendencies. With the lyricism that defines his early films George Washington and All the Real Girls and the nutty comedy that marks his recent films like Pineapple Express and Your Highness, Prince Avalanche gracefully obliterates Green’s lines of separation.