The Royal Fireworks show is back in Riverfront Park after two years off, with a very special treat 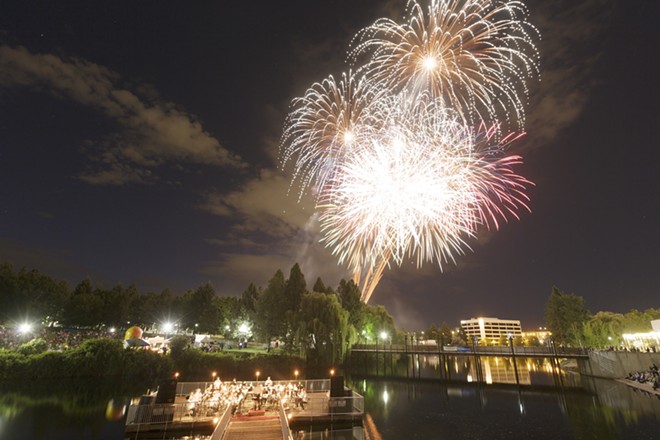 Young Kwak photo
The Royal Band, conducted b David Dutton, performs George Frideric Handel's "Musick for the Royal Fireworks, 1749, as fireworks are set off over Riverfront Park, during the Royal Fireworks Concert, Sunday, July 26, 2015, in Spokane.

The beloved Royal Fireworks Concert is back Sunday after a two-year hiatus, with the Royal Band together again, conducted by event mastermind David Dutton. This will be the 38th time this free event will fill Riverfront Park on a midsummer Sunday night, and the dancers of Baroque Ballet will kick things off with performances at 7 and 8 pm.

The highlight of this year’s revival will be the narration of Chief Seattle’s Speech of 1854, given during the signing of the Treaty of Point Elliott between local tribes and territorial Gov. Isaac Stevens. The speech has become a definitive Native American text, even though it was first written down by a white man, Henry Smith, who heard the speech first hand, but only in a real-time translation. He first put it to paper 30 years after it was delivered. Still, the words ring across generations, from that dark time when tribes were getting pushed out of their homelands: “Your God loves your people and hates mine,” Smith quotes Chief Seattle as telling Gov. Stevens. “He folds his strong arms lovingly around the white man… but he has forsaken his red children…”

Seattle outdoorsman and world traveler of PBS fame Richard Bangs will read the entire speech with a performance of “When Jesus Wept” (1770) by William Billings, which shares the mournful mood of Chief Seattle’s sentiments: When Jesus wept, the falling tear / In mercy flowed beyond all bound / When Jesus groaned, a trembling fear / Seized all the guilty world around.

It’s a poignant and fitting celebration of the 45th anniversary of the Expo ’74, as Chief Seattle’s words inspired the idea that the environment needs defenders, which became the theme of Spokane World’s Fair. “The Earth does not belong to man; man belongs to the Earth” greeted visitors to the fair on a four-story wall, and although it was one of many mistranslations of Chief Seattle’s speech, that ethos made him an enduring patron saint of the environmental movement. It’s fair to view his as a spiritual father of Riverfront Park.

And let’s not forget… fireworks! Everybody loves them, and they’re free! The explosive finale will be set, as always, to Handel’s “Music for the Royal Fireworks, 1749.” As the future of this event remains uncertain, let’s appreciate it — and give thanks to those who have kept it alive since 1978.

The concert and fireworks are “an annual gift to the people of Spokane,” writes David Dutton, “from generous community sponsors, the Board of Trustees of Spokane Historic Concerts Association and the event’s founders,” Dutton and Beverly Biggs.

Here’s hoping that somebody out there can feel the inspiration to jump in to help continue this tradition.