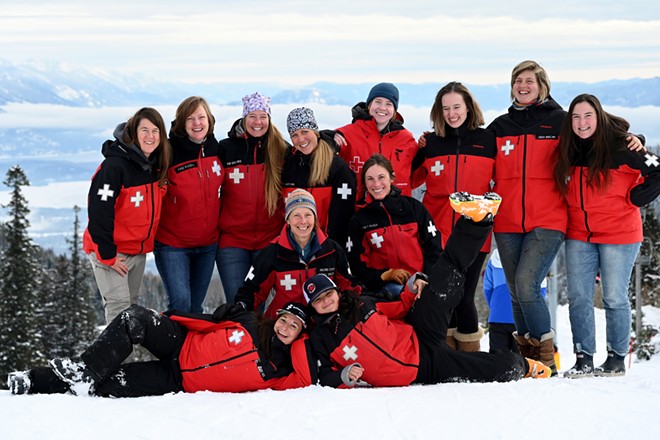 Schweitzer photo
Meet the women who could come to the rescue if you wipe out somewhere off the Lakeview Triple.

Things were different around Schweitzer when Arlene Cook was hired as a liftie in 1980. The mountain had recently changed its name from Schweitzer Basin to simply Schweitzer. There were only fixed-grip double chairs servicing the uncrowded slopes. Where there now sits a village, there was only a day lodge. When Arlene moved over to ski patrol from ski school in 1981, she was the only female in their midst.

In those days, ski patrol was a strictly male-dominated affair, and the fact that she had even cracked into their ranks was a minor miracle. What really helped Cook get through the door was the fact that she was a born and bred local, Sandpoint through and through. The head of ski patrol at the time was the now legendary John Pucci, who was also from the area and very much a local.

Cook had her work cut out for her to survive in a male-dominated industry, but survive she did. And now, some 42 years later, she's 11 years into leading that same patrol at Schweitzer, but the numbers have certainly changed. These days, the once "boys club" is teeming with hard-working women.

Several years ago, when I was out in the early and dark hours of the morning following patrollers around the mountain as they were doing explosives work in the interest of public safety, it dawned on me that the entire team I was shadowing was composed of women. That got me to wondering about the history of females in ski patrol and how that may have changed over the years.

As a younger man, I seemed to recall that ski patrol was a bit of a fraternity full of macho dudes sporting big mustaches and even bigger egos. Was that really true? Was it really a boys' club? If so, how did we get from there to here where the ski patrol director of the biggest mountain in the area is a woman — and not only that, but she's also leading a patrol that is nearly half women. Nationally the percentage of female ski patrollers is around 28 percent, so Schweitzer is ahead of the curve.

The average ratio of male to female patrollers isn't really that surprising when one considers the lopsided number of males to females actively involved in snow sports. The statistics vary a bit depending where you look, but snow sport participants generally seem to be about 60/40 male to female. So while the national average of female ski patrollers is significantly under this average, Schweitzer's ratio comes in around 39 percent, which falls right in line with the average snow sports enthusiast ratio.

Is this higher-than-average ratio somehow due to the fact that they have a female patrol director? Cook assured me this is not the case, stating clearly, "I simply hire the best person for the job."

The number of women on the Schweitzer Ski Patrol began to grow slowly at first through the '80s and '90s, and when Sarah Yancey joined around 2000 she recalls being the fourth woman in the fold. While this was certainly an increase in the ratio, she also recalls thinking that she was hired as part of a package deal along with her husband, Mark, when they moved to the area after having been on patrol at Crystal Mountain.

Even though Yancey came on as part of that package deal, she felt welcomed from the beginning and expressed that the men on ski patrol "were extremely supportive and especially compassionate" when she later became pregnant. Perhaps that early support helped pave the way for what would become a more evenly mixed group in the future.

Not one to shy away from a challenge, Sarah and Mark have operated a backcountry ski operation in Canada, Boulder Adventures, for more than two decades all while she has maintained her job as a patroller — and a mom. When I asked Yancey why she thinks the number of women in ski patrol has increased, she answers simply: "Everyone loves having more women involved."

For the women on ski patrol, one thing isn't any different from the men, and that is the need to have a different job in the off-season. Strangely enough, both Cook and Yancey spent time over the years as landscapers as well as working for the Forest Service. With the growth of Schweitzer into a year-round operation, Cook now considers herself lucky to be able to hold the position of patrol director all year, as she oversees the summertime patrol staff in their work keeping mountain biking, hiking and sightseeing safe and fun on the mountain. Among the other women on their patrol, there are doctors, farmers, nurses, firefighters, raft guides, bartenders and much more.

One of the younger generation of female patrollers to now call Schweitzer home is Leigh Bercaw, who followed her heart to move to Sandpoint from Colorado in 2015. Bercaw considers herself a Midwesterner at her core, going so far as to say she never would have left Minnesota if it just had mountains.

Perhaps it's those roots that enable her to not only be successful as a patroller but to have created a full-time job for herself farming. In her role as owner/operator of Blue Fingers Farm, Bercaw now grows and sells gourmet salad greens to local restaurants. In addition, she and two partners, one who is also a female patroller at Schweitzer, sell sourdough breads and ferments at local farmers markets and specialty stores.

Despite her fairly obvious work ethic and drive, Bercaw still feels a bit of resistance as a female patroller, noting that when she arrives on an accident scene some patients seem occasionally confused or surprised at the idea of being "saved" by a woman. As part of the growing number of women on the Schweitzer patrol, Bercaw is grateful for those who paved the way before her and also excited to be a part of creating a future environment in which people will no longer be confused or surprised when a female patroller shows up simply to do her job.

While gains have been made for women on patrol, all the women I spoke with seemed to convey a sense that people often still look at them with a bit of surprise for doing the same job as a man. That attitude is a bit sad in light of the fact that, when I asked Cook who works harder between the men and the women, she says, perhaps a bit tongue in cheek, "the women, because they have to prove themselves." It seems almost certain that these hard-working women of ski patrol will eventually be looked at just the same as the men.

These days, the slopes at Schweitzer are almost entirely serviced by high-speed three-, four- and even six-person chairlifts. Where the day lodge was once the only building, there are now hotels, condominiums, restaurants and stores, creating a mountaintop village. Back in the day, almost every skier would be from Sandpoint, Coeur d'Alene or Spokane; today, one might share the chairlift with riders from Seattle, Colorado, Texas, or even Europe or Asia.

While not everyone is excited about all of the changes on the hill through the years, I think we can certainly all agree that 12 female patrollers on the staff instead of one is a big improvement. We should just be thankful they're working their hardest to keep us all safe. ♦

John Grollmus is a lifetime resident of the Inland Northwest, local restaurateur and backcountry ski guide. He loves all things outdoors, food of every kind and, more than almost anything, skiing. John can currently be found living with his wife and favorite human, Kim, near Hope, Idaho.